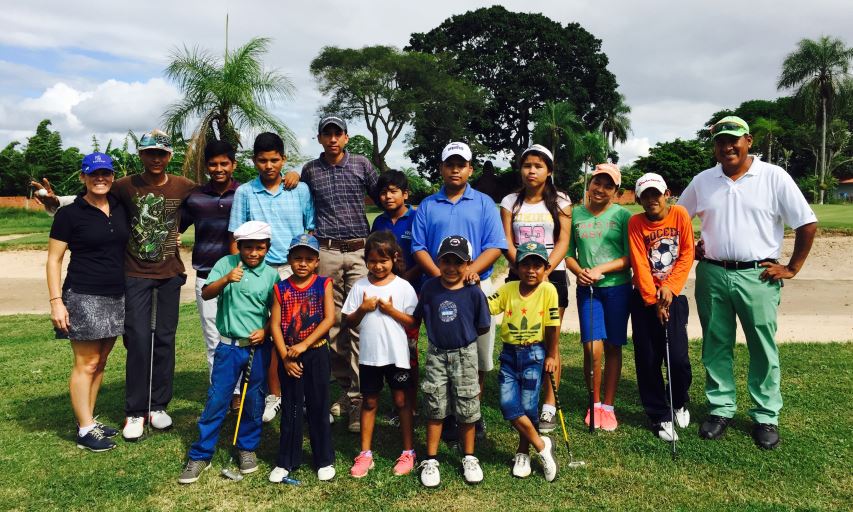 Tiffany Chaisson of Fairways Golf with Roger and the Bolivian Juniors in 2017. (Photo/Fairways Golf)

The children of the El Almendro community in Santa Cruz, Bolivia, are very happy.

In February, they received a care package from a generous group of people in Alberta. But it wasn't the normal sort of care package you might expect to be sent to underprivileged children in a developing country. Instead of blankets and food, it was golf clubs and golf balls. 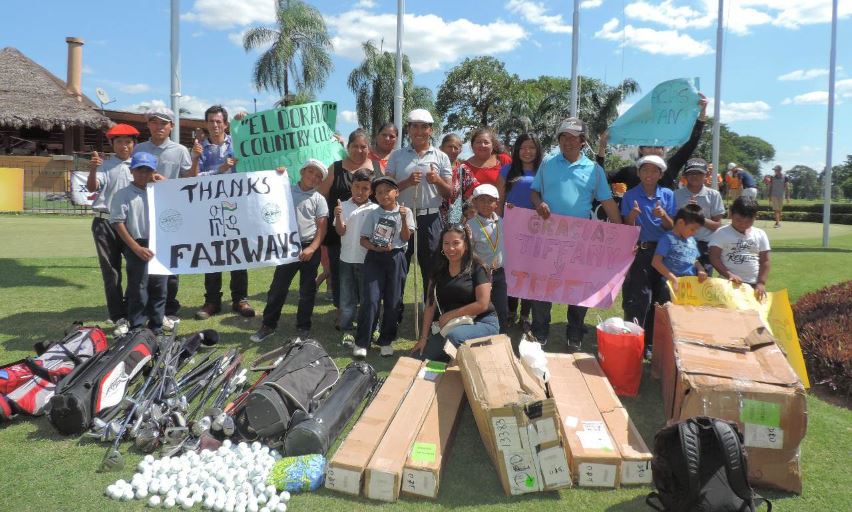 Edwin In The Centre (White Hat) With The Juniors And Their Parents And All The Donated Items From Glencoe Golf & Country Club. (Photo/Fairways Golf)

The group in question were the kind people at the Glencoe Golf and Country Club, which sits alongside the Elbow River on the western side of Calgary.

Of course, Bolivia isn't the first place most people would think of when it comes to donating golf equipment to needy children, but there is a connection, which starts, of all places, on Prince Edward Island. 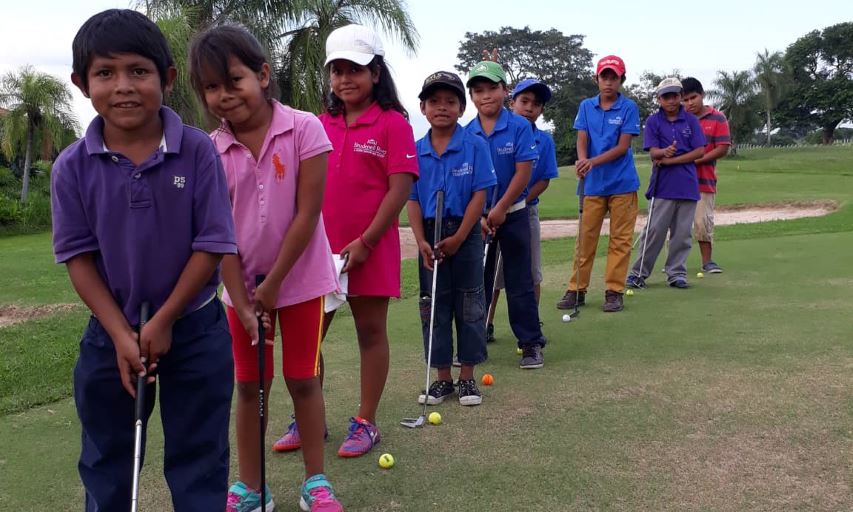 The Juniors Practicing In Clothes Donated By Golfers On PEI. (Photo/Fairways Golf)

It was there, that an Australian woman, Tiffany Chaisson, founded a golf nonprofit to support kids who love the game, but whose families couldn't afford to pay for it. Called Fairways, the nonprofit's mission is simply, "Golf Without Bounds," as Tiffany did not want any national borders to be an impediment to children playing golf. Now Fairways supports over 20 children by sponsoring their membership fees, lessons and practice range access. The Canadian cadets even get access to an indoor simulator during winter! 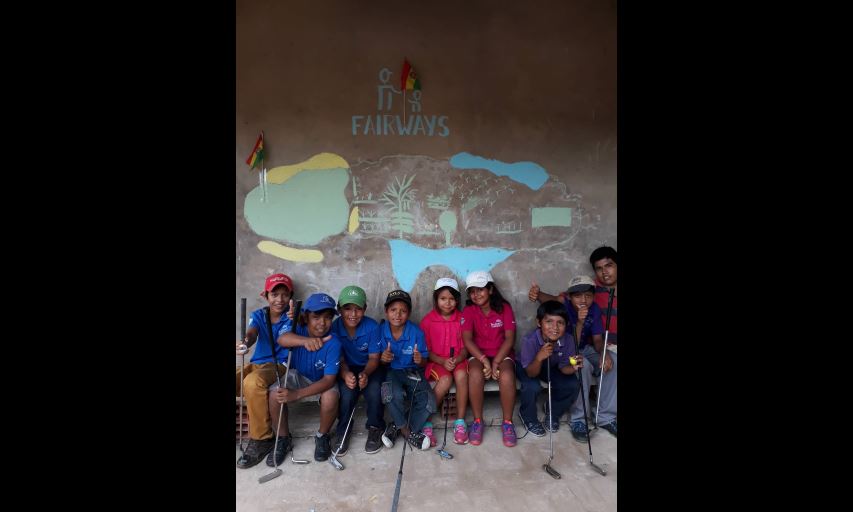 The Children In Front Of The Design They Drew On Their Lesson Space. (Photo/Fairways Golf)

In August 2016, Tiffany was in Calgary for the CP Canadian Women's Open, when her friend, Gordon Moir, Director of Greenskeeping at St. Andrews Links in Scotland, made her an introduction to Kerry Watkins, Glencoe's Superintendent. On her visit, one of the pro shop staff, Yvonne Cita, heard about Fairways and asked if she could tell her friend about it, because he was helping kids with golf in Bolivia.

Another introduction was made, this time to Edwin Fernandez, a former UN military peacekeeper, who was now working with underprivileged boys in Santa Cruz, by teaching them values through the game of golf. Edwin had, in fact, fallen in love with the game while on a charity visit to Alberta a couple of years earlier, and became determined to pass on the sport's benefits to the kids in his care.

Tiffany loved Edwin's story and flew to Bolivia for two months in early 2017 to help him set up a program. She found Edwin teaching the kids golf with his own adult clubs and any lost balls they could retrieve from hazards. Tiffany arranged for 250 ex-range balls, donated by PEI's Finest Golf, to be sent to Bolivia, and Snell Golf Canada donated a few dozen new balls too. Meanwhile, the good people at Glencoe GCC collected ten sets of golf clubs, and they too were shipped to Santa Cruz. While it took almost a year for the equipment to make it through the bureaucracy of Bolivia's postal system, the clubs and balls finally arrived, much to the delight of the kids. 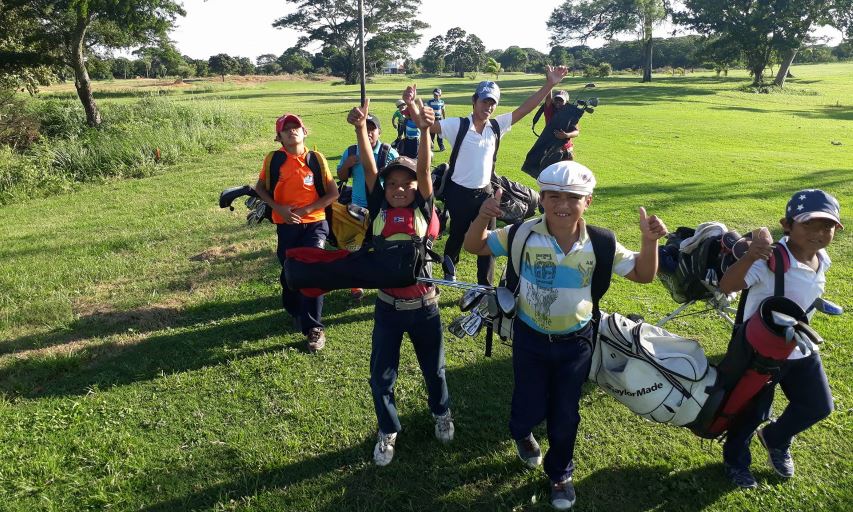 Tomy And Elias In The Front As They All Head Out To Practice. (Photo/Fairways Golf)

Golf in Bolivia is the preserve of the super-rich, so Tiffany coordinated with Edwin and the owner of El Dorado Country Club for Fairways' Bolivian cadets to be able to access the course to practice. As they cannot always get access to the course, they also practice on football fields and on baseball diamonds. For putting practice, they have smoothed the dirt road outside their houses and have cut little holes in the earth to serve as the cups. 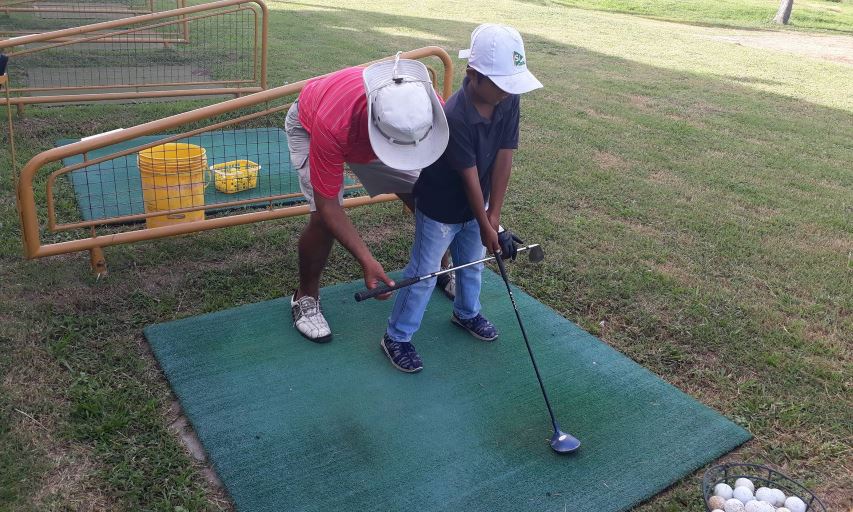 Edwin Helping Tomy With His Set Up. (Photo/Fairways Golf)

The children can play on good courses when the Bolivian Golf Federation holds a junior tournament, so at these times, Fairways pays for the kids' entry fees, plus food and transfers. The children have performed very well and the Bolivian golf community have started taking notice. One time, Ale, a 16 year old Fairways cadet, even won a tournament by 10 strokes!

Since Fairways operates globally — it has cadets in Bolivia, Canada, Nepal and India — fundraising proved problematic in comparison to most nonprofits which have a local focus. Eventually, Tiffany and her team came up with the idea for Awesome 4somes, which are online sales of four person tee times donated by golf clubs. 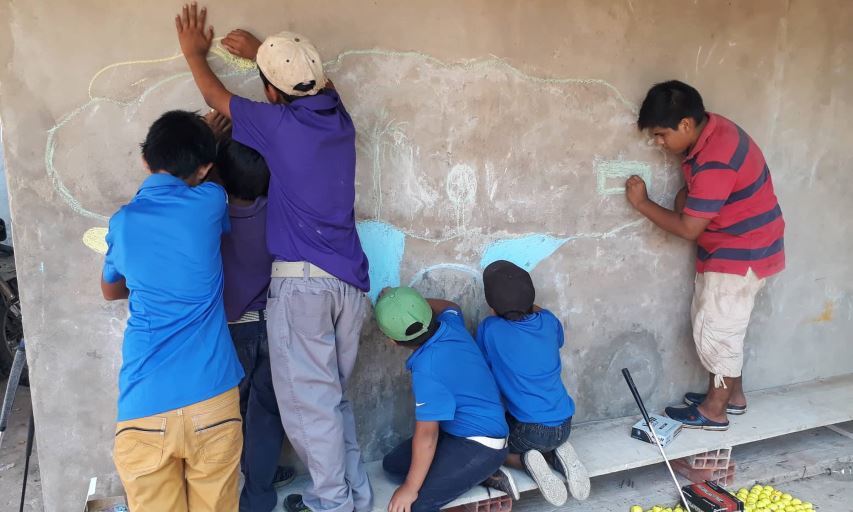 The Kids Designing The Wall Of Their Lesson Space. (Photo/Fairways Golf)

In addition to a number of TPC courses in the US and even the St. Andrews Castle course in Scotland, plenty of Canadian clubs have donated to Awesome 4somes. Names including top 100 courses, Devil's Pulpit in Ontario, plus Fox Harb'r and Cabot Cliffs in Nova Scotia. The golf course management group, GolfNorth, have even donated 20 tee times from their collection of Ontario courses.

"We found that many people have donation fatigue." says Tiffany. "They're being asked to put their hands in their pockets constantly for good causes, each one just as deserving as the next. So we wanted to give our supporters some value, and what better value than golf? Buyers of each Awesome 4some get a great round for themselves and three friends, plus that good feeling that comes with helping children in disadvantaged circumstances. We call it giving the gift of golf." 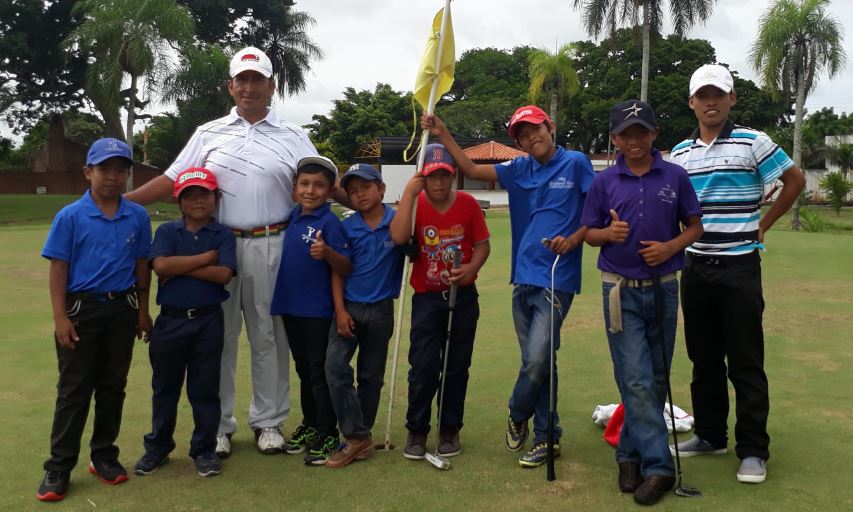 Information about the available Awesome 4somes or about how to become a Fairways sponsor, is available on their website. If anybody would like to donate a tee time to Awesome 4somes, they can contact Tiffany via email at This email address is being protected from spambots. You need JavaScript enabled to view it..

Meanwhile, back in Santa Cruz, the Bolivian kids continue their daily practice, treating their precious equipment as if it were gold. Who would have thought that a chance meeting in a Calgary pro shop could lead to so much joy half-way across the globe?