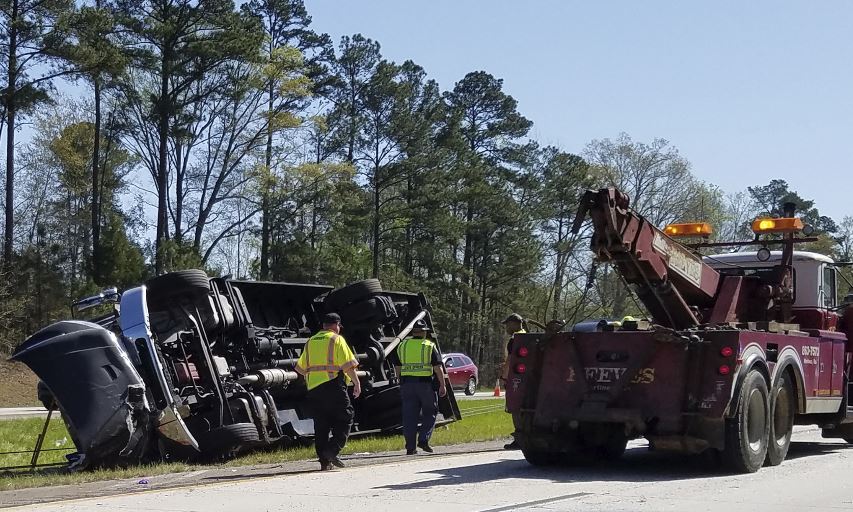 Police Officers And Emergency Workers Examine The Scene Of The Accident. Authorities Say At Least A Dozen People Were Injured And The Bus Driver Steven Hoppenbrouwer Was Charged With DUI. (Joe Hotchkiss/The Augusta Chronicle via AP)

AUGUSTA, Georgia (Russ Bynum/AP) — A charter bus headed to the Masters golf tournament overturned on a Georgia interstate Thursday, injuring 15 people and snarling traffic as scores of fans made the pilgrimage to one of the sport’s premier events. The bus driver was charged with driving under the influence.

The bus carrying 18 passengers crashed about 8:45 a.m. Thursday, just as fans were driving in for the tournament’s first round. Sgt. Chris Wright of the Georgia State Patrol said the driver ran off the right side, then overcorrected and caused the bus to overturn in the median. Some passengers suffered broken bones and head injuries, Wright said, but none were life-threatening.

The bus driver, 61-year-old Steven F. Hoppenbrouwer of Gwinnett County, Georgia, was charged with DUI and failure to maintain lane. Wright said investigators believe Hoppenbrouwer had been using drugs, not alcohol. He said passengers told authorities the bus had drifted off the edge of the road twice before it veered a third time and crashed.

“They were starting to become concerned about his ability to drive,” Wright told The Associated Press in a phone interview. “One of the guys had even said, ‘I’m not riding back with him. I’ll call an Uber to get back to Atlanta.’”

Passenger Kip Plowman said the first time the bus swerved, the driver said he turned to avoid “a tire or a piece of metal in the road.”

“We didn’t really believe him,” Plowman said in a video released by Doctors Hospital, describing the crash from the emergency room as he waited to have broken glass removed from his hand. “It seemed like we were wobbling a bit as we went.”

Then the bus careened off the road, spun around and then skidded on its side a good distance, Plowman said. Smoke was filling the interior, he said, as he climbed out a window above his head and pried open an emergency exit in the bus roof.

“It’s not the way we planned the day,” Plowman said. “But everybody’s alive. We’re thankful for that.”

The Masters is one of pro golf’s four major tournaments, and it draws fans from across the Southeast — and around the world.

The crash blocked Interstate 20 in both directions about 15 miles (25 kilometers) from the tournament at Augusta National Golf Club along a major route from Atlanta, where many golf fans fly in before driving the last leg. It took hours to clear the crash, and even then authorities advised drivers to look for alternate routes.

Operated by Jet Executive Limousine of metro Atlanta, the charter bus “was set up like a party limousine in the back,” Wright said.

He said the interior of the bus matched a photo on the company’s website showing colorful strip lighting, a single row of seats lining each side of the bus and cocktail glasses hanging over a bar.

“It didn’t appear to us that any of the patrons in the back were intoxicated or anything of that nature,” Wright said. “They were just riding down for a pleasant day at the Masters. And unfortunately tragedy struck.”

Nine of the injured passengers were taken to Doctors Hospital in Augusta, which said in a statement that one passenger was in critical condition Thursday evening. The hospital said six passengers had been treated and released.

A man who answered the phone number listed for the limousine company declined to comment. “We’re not making any statements right now,” said the man, who wouldn’t give his name.

A phone number listed for Hoppenbrouwer was disconnected. It was not immediately known if he had an attorney.