Royal Colwood Hosting Top Female Amateurs From Around The World 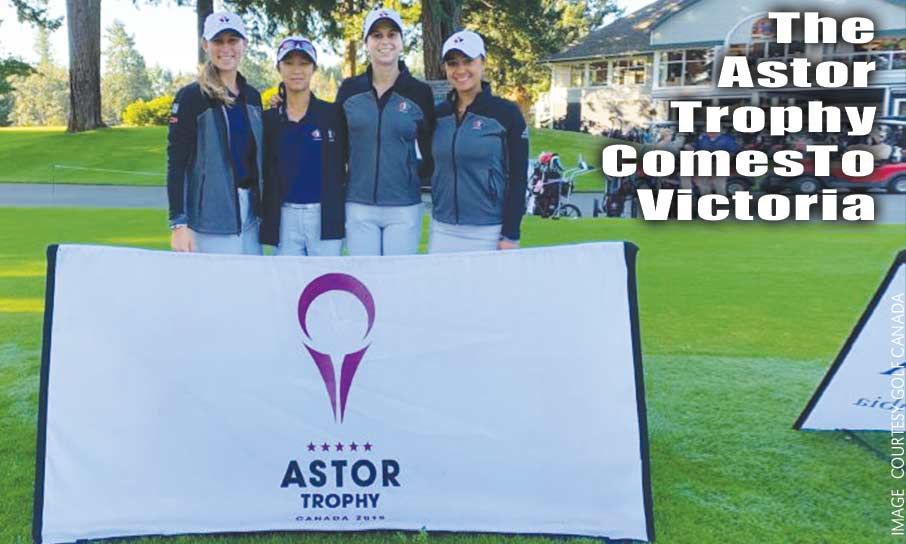 The Astor Trophy competition is held every four years between teams from Australia, Canada, Great Britain & Ireland, New Zealand and South Africa. Each country is represented by four female players and each country contests foursomes and singles match play in a round-robin format.

This year, from August 29th through September 1st, Royal Colwood in Victoria, is the host Club.

The athletes selected by Golf Canada for the Astor Trophy were determined based on an assessment of world rankings and head-to-head results among those with a declared intent to compete. The sole member from BC, the 20-year-old Parsons recently competed at the Pan American Games in Lima, Peru, where she was part of Canada’s bronze-medal-winning mixed team. Parsons also finished fifth in the women’s competition in Lima. Parsons won the 2018 B.C. Women’s Amateur Championship and is a former member of Golf Canada’s National Junior Girls Squad.

Royal Colwood should prove a strong test. Designed by Arthur Vernon Macan in 1913, it is a traditional style parklands championship course set amongst 450 year old Douglas firs and majestic Garry oaks. One of a select few in the world, Royal Colwood received its Royal designation from King George V in 1931.

“We’re thrilled to be hosting this international championship at one of the finest courses Canada has to offer,” said Golf Canada tournament director Adam Helmer. “Royal Colwood is in fantastic shape and will prove to be an excellent challenge for some of most talented junior golfers from around the world.”

Royal Colwood President Graham Terlson echoes the sentiment, "We are excited to have this opportunity to showcase our club to these top amateur golfers. We encourage you to come out and show your support for the teams and especially Team Canada."

It looks like there could be some low scoring if the practise rounds are any indication. Great Britain & Ireland's Emily Toy scorched the back nine with a 6-under 29 that included two birdies and an eagle over her last three holes.

If you are thinking of attending, going on Saturday (Aug 31st) would be a great chance to cheer on Canada as they take on the South African squad after not competing on the Friday.

Australia won the event when it was last contested in 2015 at the Grange Golf Club in southern Australia. Canada has won the Astor Trophy on two occasions, in 1987 and 1979. Canada last hosted the Astor Trophy in 1999 at Marine Drive Golf Club in Vancouver. Past Canadian participants include Lorie Kane, Marlene Streit, Dawn Coe-Jones and A.J. Eathorne. Past international players include former world No. 1 Lydia Ko and Catriona Matthew, the captain of the 2019 European Solheim Cup team.

SCHEDULE OF ROUND ROBIN COMPETITION:

SCORING
In 2019 there are four players in each team. Each match consists of two foursomes and four singles. Previously there were five players in each team and each match consisted of two foursomes and five singles. The winner of the match receives 1 point while in a tied match each side receives ½ point. The winning team is first decided by the number of matches won. In the event of a tie the order is decided by the number of individual matches won, including a half point for each halved match. If the teams are still tied then the cup is tied.

You can also find out more about the competition from Golf Canada at
https://golfcanada.bluegolf.com/bluegolf/rcga19/event/rcga19816/index.htm