Too Soon For Swanson's Swan Song 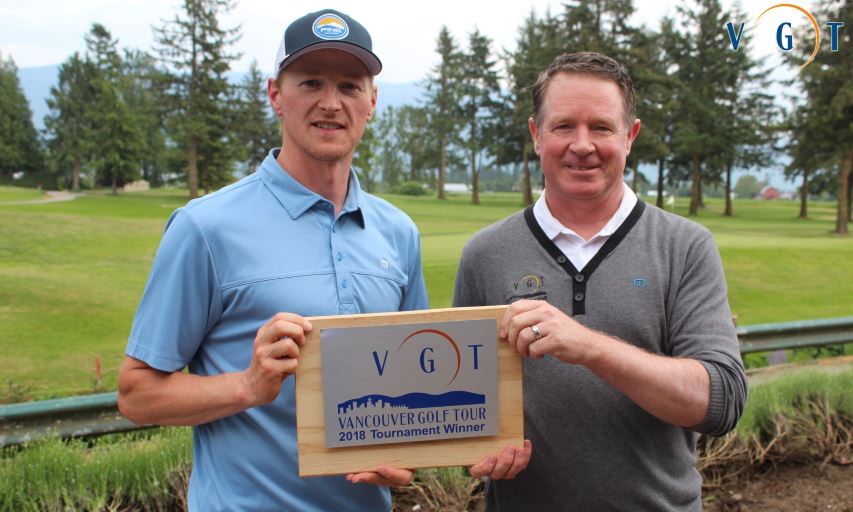 Old golf pros don’t fade away. Some of them get reinstated as amateurs, where they can further stoke their competitive fires. Actually, Dan Swanson isn’t old. He’s only 39 and thinks he has lots of good golf left in him. Just not at the professional level.

So Swanson, who turned pro in 2003 after a successful collegiate career at the University of Texas-El Paso, has had himself reinstated as an amateur. “For me personally, I just wanted to be able to compete in big events just because I love competing and I love the game,” Swanson said in an interview.

Swanson, a Surrey native who now lives in Langley, tried life as a touring pro. He spent three years on the Canadian Tour and played in one Canadian Open. He also worked as a club pro. Swanson was head professional for a time at Guildford Golf & Country Club in Surrey, where he and his buddies still gather for men’s night every Tuesday.

Now in property management, Swanson manages farms in the Fraser Valley. Full-time work has meant he hasn’t been able to work on his game as much as he needs to compete at the pro level. “I work enough where I don’t have the time to work on my game like some of the local guys on the Vancouver Golf Tour and stuff like that,” he said.

“For the amount of time I put into the game I can’t compete with those guys. So it made sense for me to just be able to play in big (amateur) events and compete against players at my kind of level.”

Swanson has signed up to compete in this summer’s B.C. Mid-Amateur Championship at Hyde Mountain Golf Course in Sicamous. He’s also hoping to qualify for the B.C. Amateur Championship, which goes July 10-13 at Rivershore Golf Links in Kamloops. “The Canadian Amateur and Canadian Mid-am are both local this year (both on Vancouver Island) so that would be ideal to be able to compete in those also,” Swanson said.

He said regaining his amateur status has him excited about golf again. “It has reinvigorated my love for the game,” he said. “After I played pro I felt a bit like I had failed. I felt like I had put so much into the game and I didn’t accomplish what I wanted. So I just didn’t enjoy it anymore and it was too bad because I did love it for so long. Mentally, it seemed like work.

“So I kind of took some time off from it. I still played once in a while, but now it’s like I'm a kid again. I just look forward to going to the golf course, playing with my buddies and hitting good shots. It just gets me back to why I started the game. I'm playing because I love the game and I love to compete. I'm not thinking about anything else except shooting the lowest score possible and trying to beat everybody.”

Swanson said he’d love to get his name on a provincial and national championship trophy. He came close way back in 1999, when he finished second by one stroke to Brad Newman-Bennett at the B.C. Amateur at Storey Creek Golf Club in Campbell River. “I definitely have some unfinished business at the B.C. Amateur,” Swanson said. “I contended quite a few times and that (1999) was the closest. I definitely want to get back there and be in that same position again and give myself a chance. That would be so much fun.”

Swanson could look to Winnipeg’s Todd Fanning for inspiration. Fanning, a former regular on the Canadian Tour, was reinstated as an amateur and last year the then 49-year-old won the Canadian Mid-Amateur title in Regina. That victory earned him a spot in this year’s RBC Canadian Open.

Kris Jonasson, CEO of British Columbia Golf, thinks more professionals who are no longer regularly competing should consider regaining their amateur status. “I think everybody should chase their dreams,” Jonasson said.

“But trying to make a living playing professional golf is so difficult. Once you have made a decision that it’s just not how you can support yourself or the type of lifestyle that you want, amateur golf provides all kinds of opportunities for first-class competition. There are very few weak fields any more. If you play at the top level of amateur golf you might as well be playing as a professional because they are just that talented.”

Jonasson noted that the top amateurs in B.C. are provided with opportunities to play in some prestigious events. “The Mexican Golf Federation asked us, actually begged us, to send a team down to their national championship this year. They provide a lot of subsidies and we have a couple of players that can go.

"We have the PNGA Cup matches which just took place at Seattle Golf Club, the Pacific Coast Amateur this year at Olympic Club. Those are quality venues. It doesn’t get much better than that from a competitive point of view. And you can still work.”

The reinstatement process is relatively straightforward. There are some forms to fill out and a maximum waiting period of two years, depending on a player’s history as a professional. “It was simple,” Swanson said. “You just fill out some paperwork.”