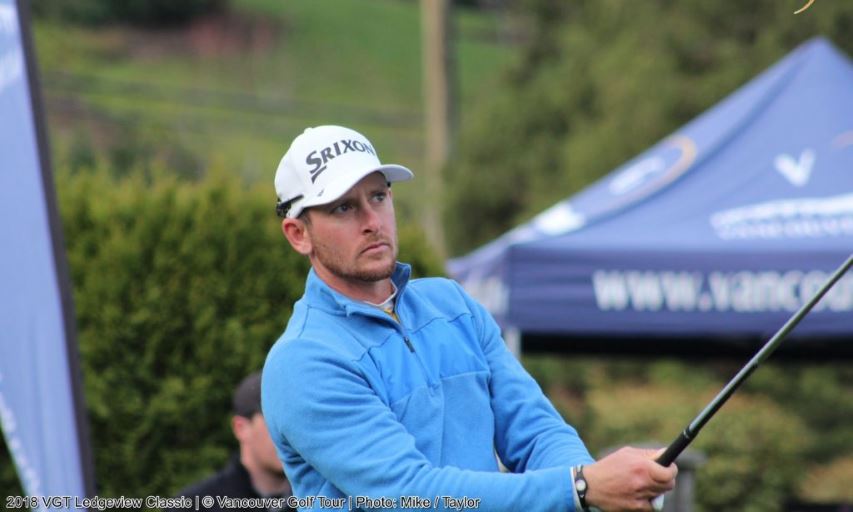 Mission Native Kevin Stinson Has A Spot In The Season-Opening Mackenzie Tour Event At Point Grey, But Is No Longer Chasing The PGA TOUR Dream. (Vancouver Golf Tour/Mike West)

Much is made of the considerable success the Mackenzie Tour-PGA Tour Canada circuit has had in developing players and helping them move on to the Web.com and PGA TOURs.

We hear less about the many others who don’t make it to golf’s promised land. Mission’s Kevin Stinson is one of those and he’s okay with that.

Stinson has given up chasing the pro golf dream and is content in his new life as a part-time player and a teacher at Cheam Mountain Golf Course in Chilliwack.

Suddenly, golf seems less daunting and is more fun for Stinson, who spent several years toiling on the Mackenzie Tour and will make a matinee appearance at the season-opening Freedom 55 Financial Open at Point Grey Golf & Country Club.

“For me, since I have given up chasing it, it has actually made golf easier for me because your life is not solely focused on golf,” Stinson said in an interview before a recent practice round at Point Grey. “You have a broader spectrum of things in your life and it just kind of takes the pressure off.

“Is this week going to change my life? Probably not. Maybe if you win or something, it might, but after today I am going back to teach two lessons tonight, so I have that supplemental income coming in and that’s really nice. You just feel much more comfortable.”

Stinson earned his exemption into the Freedom 55 event by winning the spring Order of Merit on the Vancouver Golf Tour. He’s looking forward to the Point Grey tourney, but it’s clear he does not miss the grind of playing the cross-Canada tour and chasing that dream. He has, after all, been there and done that.

Stinson, 32, likes the balance in his life right now. He’ll play his heart out at Point Grey, but fully expects to get back to his new life the following week.

That new life came about when a couple of Stinson’s closest friends signed a lease to operate Cheam, a facility that includes a par-56 executive course and driving range. His buddies hired Stinson to run the teaching side of the business.

Stinson, who had a successful collegiate golf career at Wayland Baptist University in Plainview, Tex., is enjoying the instruction work he is doing with a variety of students. “It’s great when you see people have some success and that light bulb goes off in their head and they shake your hand and say, ‘thank you, I have never hit a shot like that before.’ That is what makes it a lot of fun for me.”

Stinson, of course, hopes to hit some nice shots at the Freedom 55 event, which goes May 31-June 3. He played there last year and tied for 39th place at four-under par. Stinson likes where his game is at right now and with no real pressure on him, thinks he can do even better this time around.

“My game is good,” he said. “I get less time to practice now so when I do get a chance I have to really maximize my time. I think I used to waste a lot of time practising. I would be on the range hitting ball after ball and not really thinking about what I was doing. Now I might get a couple hours here, a couple of hours there and I really have to switch it on and maximize my practice because I just don’t get that every day.”

Stinson is one of six players who have received sponsor’s exemptions into the $200,000 event. The others are Langley’s Devin Carrey, Taylor Pendrith of Richmond Hill, Ont., Evan Holmes ofCalgary, Jimmy Jones of Tampa, Fla., and Point Grey head pro Dave Zibrik.

Point Grey is in terrific shape. Last year, the course was one of several in the area that suffered after a difficult winter and the 2017 tournament was held in less than ideal conditions.
“This is the best I have seen the golf course since I have been here,” said Zibrik. “We got through the winter really well. We had a new superintendent join us in March (Tyler Patroch) and it has been phenomenal what he has done in two months.”

Zibrik is playing in the event for the second straight year. He missed the cut last year after shooting rounds of 69 and 76. “When you get the competitive juices flowing and get a chance to tee it up with these guys it’s a lot of fun,” said Zibrik. “I know that if I play well I can still be fairly competitive out there and play the weekend.”

Point Grey rewards big hitters who will be able to reach all four of the par 5s with second-shot irons, but requires accuracy as well. “It’s a good old-school track,” Stinson said. “You have to be precise, but it also helps to hit it far. If you can combine both of those, it’s perfect.”

The Point Grey stop is the first of 13 events on this year’s Mackenzie Tour schedule. The B.C. swing continues with stops at Uplands in Victoria for the Bayview Place DC Bank Open and Kelowna for the GolfBC Championship at Gallagher’s Canyon.

ICE CHIPS: North Vancouver’s Eugene Wong, who finished second in the inaugural Mackenzie Tour event at Point Grey in 2014, is in the field. . .The field will be filled late Monday with 10 spots from a qualifier being held on the Resort Course at Swaneset Bay in Pitt Meadows. . .Last year, Florida’s Lee McCoy won the Freedom 55 tourney by eight shots with a winning score of 20-under par. McCoy is now a regular on the Web.com Tour.