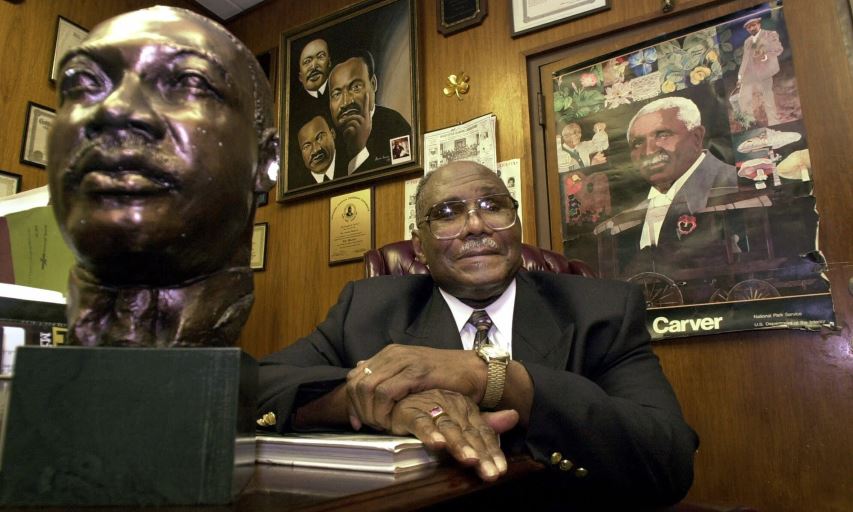 Rev. Abraham L. Woods Jr.’ s Fight For Justice Is A Poignant Reminder That There’s Still Plenty Of Things Worth Fighting For In The Struggle For Civil Rights In Sports. (AP Photo/Mark Humphrey, File)

SHELBY COUNTY, Alabama (Paul Newberry/AP) — After finishing her round at Shoal Creek, Brittany Lincicome got a little history lesson.

She couldn’t believe what she was hearing.

Not so long ago, the ritzy club hosting this week’s U.S. Women’s Open saw nothing wrong with allowing only white, gentile men to join its membership rolls. Not so long ago, this lush spot nestled among the rolling hills southeast of Birmingham, Alabama, was a lightning rod in the struggle for civil rights in sports.

“Oh my God, I can’t believe that was still in 1990,” Lincicome said. “I mean, it doesn’t feel like it was that long ago for that to still be happening.”

Indeed, it’s hard to fathom that less than three decades is all one needs to return to a time when it was still acceptable to host a major golf tournament while clinging to exclusionary membership policies based on race, sex or religion.

But the 1990 PGA Championship at Shoal Creek helped to change all that, forcing the PGA Tour, PGA of America and other governing bodies to address the dark cloud hovering over their sport.

Finally, they had to do the right thing.

The impact of Shoal Creek has faded over time — hey, history isn’t America’s strong point — but it’s worth remembering in a world where many of the same battles are still being fought, from quarterback Colin Kaepernick taking a knee to protest racial injustice to big-time golf clubs refusing to let go of the ludicrous notion that it’s OK to restrict membership to men only.

“You don’t accomplish anything too worthwhile unless you get some type of resistance,” said the Rev. Calvin Woods, head of the Birmingham chapter of the Southern Christian Leadership Conference. “The sinner is always going to resist in some fashion.”

Woods’ late brother was the one who organized the protests against Shoal Creek.

A longtime civil rights leader in Birmingham and Calvin’s predecessor as the local SCLC president, the Rev. Abraham Woods Jr. simply couldn’t let it pass when Shoal Creek founder Hall Thompson infamously declared in the lead-up to the 1990 PGA Championship: “This is our home, and we pick and choose who we want.”

“That was a stronghold,” Calvin Woods, now 84, said Friday when reached by phone. “A stronghold is anything holding strong. That was a social problem that affected a significant number of people, and something needed to be done about it. Some things can’t keep passing by. You have to deal with it.”

When Thompson’s comments sparked Abraham Woods into action, the activist ran into plenty of opposition.

Much of it, remarkably enough, from African-Americans, according to his brother.

“There were some blacks who said, ’This is not going to profit us. We’ve got no money to join a club like that,’” Calvin Woods recalled. “But Abraham was concerned about all people. He was concerned about the poor trying to elevate. He wanted to give them the right and opportunity so that if they ever did have the money to get into these things, the door wouldn’t be closed because of the color of their skin or their gender.”

To fend off protesters and fleeing sponsors, Shoal Creek agreed to admit one African-American as an honorary member, Birmingham insurance executive Louis Willie. Then, as soon as the crowds and the cameras left, the club largely resumed business as usual, spurning any immediate chance to host additional majors.

“It was just as I thought,” Abraham Woods would say a few years later. “They had a gun to their head. Once you remove the gun, they do nothing.”

The change that Woods fought for did come to golf.

Too slow for his tastes, as is always the case with these sort of epic social shifts.

And clearly, there’s still plenty of work to be done.

But Augusta National let in its first black members shortly after the Shoal Creek protests. A few years ago, the home of the Masters finally opened its membership to women. Next year, it will host a women’s amateur championship for the first time.

Shoal Creek changed, too. The club now has members who are African-American, female and Jewish (notably, former Secretary of State Condoleezza Rice, who also was among the first women to join Augusta National). It hosted the U.S. Junior Amateur in 2008. A senior major called it home for five years. And now, it’s got the U.S. Women’s Open — its biggest event since that infamous PGA Championship.

Neither of the protagonists from that not-so-long ago battle is around to see it.

Thompson followed him to the grave two years later.

“It’s a shame, obviously, that that was part of the history here,” said Australian Sarah Jane Smith, who was leading Friday after shooting her second straight 5-under 67. “But at the same time, they tried to make some changes after that. And I think the (1990 PGA) brought some light to that and hopefully made some great changes for the better and made it an all-inclusive place to be.”

Shoal Creek was once a battleground.

Going forward, let it be a reminder of all that’s worth fighting for.