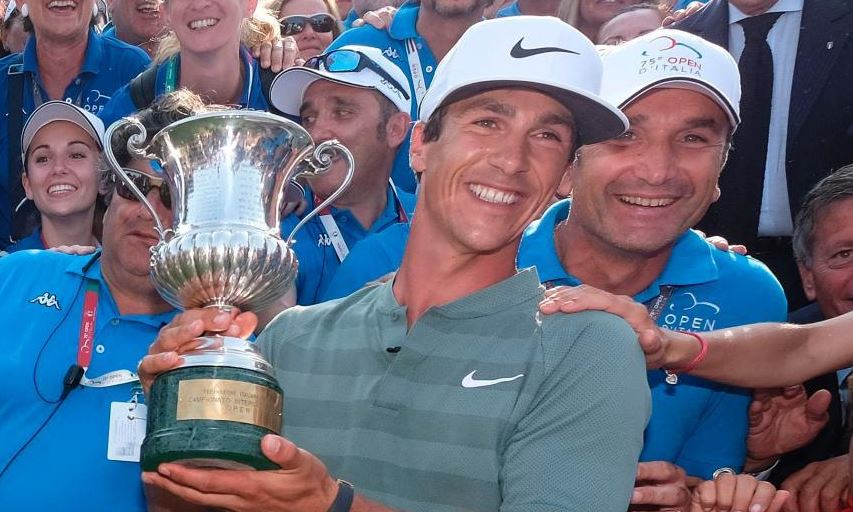 Thorbjorn Olesen Poses With His Trophy After The 75th Italian Open. (Filippo Venezia/ANSA via AP)

BRESCIA, Italy (AP) — Thorbjorn Olesen of Denmark sunk a 10-foot putt on the final hole to win the Italian Open and avoid a playoff with home favorite Francesco Molinari.

Olesen finished one stroke ahead of the Italian for his fifth European Tour victory and first Rolex Series win.

When Olesen stepped up to the tee at the par-4 18th at Gardagolf Country Club, he held a two-stroke lead over Molinari.

But ahead on the green, Molinari sunk a 30-foot putt for birdie to slice the lead to one stroke and prompt roars from the crowd. Then Olesen hit his second shot into a green-side bunker after driving into the rough.

Olesen held his nerve, however, and got up and down.

“I knew from the start it was going to be tight,” said Olesen, who entered the final round tied with Molinari one stroke behind Lee Slattery.

“I never had that final putt to win. That’s why this one feels so amazing,” Olesen added.

Molinari, the 2006 Italian Open winner, was coming off the biggest victory of his career at the BMW PGA Championship last weekend.

A bogey on the 17th — only Molinari’s second of the entire tournament — ended up being decisive.

“I don’t think I could have done more,” Molinari said. “I’m very satisfied with what I did. Complements to Olesen. He played great today and yesterday and he deserved this victory. I can’t complain. I was aggressive until the end.”