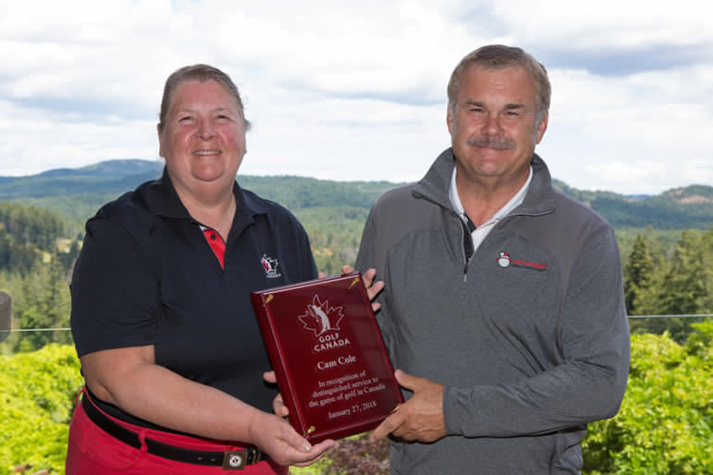 Cam Cole seems to have this retirement thing down pat.

“I am playing way more than I ever have in my life,” he says over the phone between rounds at his new home course, The Harvest, in Kelowna. “I am probably playing three or four times a week. The game has not become less a part of my life after retirement. It has become even bigger. I am enjoying that.”

For many years, so many Canadians enjoyed Cole’s beautifully crafted columns from golf’s major championships. By his count, Cole covered 66 majors, along with seven Ryder Cups and six Presidents Cups, nine (RBC) Canadian Opens and several (CP) Canadian Women’s Opens before retiring in December 2016 after an exemplary 41-year career as one of this country’s top sportswriters.

Cole is receiving Golf Canada’s Distinguished Service Award for his contribution to the game. He received that award at a June 4th ceremony at Bear Mountain Golf Club in Victoria. A round of golf followed, which suited Cole just fine.

“I don’t seem to be getting any better at it, but I still love it,” says Cole, a left-hander who boasts an eight handicap despite playing with a set of Ping Eye 2 irons that are 30 years old. “The Harvest has this reputation of being a really wide open, easy golf course. But scoring there for me seems really difficult. I have had a few rounds close to par, but then I’ve also had some 84s and 85s in there. It just depends, if you miss it in the wrong place you are still going to be struggling. And those greens are really slopey and tough.

“I have enjoyed it there, there’s a good group of guys to play with and it’s a very friendly kind of atmosphere.”

Cole, of course, covered much more than golf. He was a fixture at Stanley Cup playoffs, covered many world figure skating championships, Super Bowls and Grey Cups. He attended 16 Olympic Games.

But golf was perhaps his favourite assignment, in part for a selfish reason.

“I enjoyed golf more probably because they can’t play it at night,” Cole says. “As you know, deadlines are the least fun thing about the job. It is so much easier on the brain having a couple of minutes to think before you have to commit it to print. I think generally speaking it makes for better writing if you have some time to think and execute a line or a paragraph without having to just rush into it.”

Michael Farber, Cole’s longtime sportswriting colleague, worked alongside Cole at many big events and paid his friend the ultimate compliment in an interview from his Montreal home. “I would rather read Cam Cole writing about golf than just about anybody writing about anything,” says Farber, a Sports Illustrated special contributor who also does essays for TSN.

“He is multi-talented and covered so many sports so well, but I think he was such a great golf writer because he was a such a great golfer, at least by the fairly low standards that we mortals have. He had a higher IQ for golf than most of the people writing about it.”

Cole has many great memories from all those golf majors he covered, but says Tiger Woods’ first and last major wins are among the most memorable. “I think it was my fourth or fifth Masters when Tiger won in 1997 and just blew away the field,” Cole says. 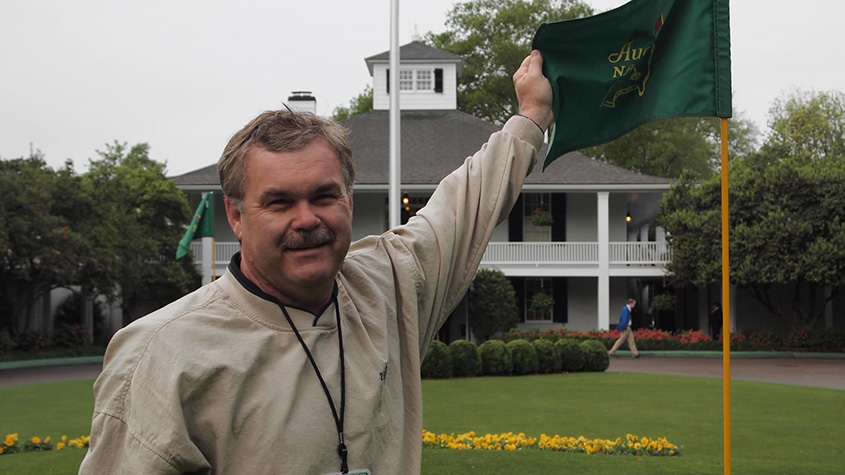 “I think he shot 40 on the front nine the first day and we were going, oh dear, and then he shot 30 on the back or something and was off to the races. And then his last major — I hope it’s not his last, but it might be — the one he won at Torrey Pines (in 2008) on one leg. Those two bookends to his majors career were pretty damn special to watch.”

Cole also mentions the last Open Championship he covered in 2016 when Henrik Stenson and Phil Mickelson staged their epic duel at Royal Troon in Scotland. “I thought was the greatest golf I had ever seen between two guys,” he says.

But Cole says the best memory of his time spent covering golf came in Kelowna, now his home, when he caddied for Jack Nicklaus at the official opening of The Bear Course at Okanagan Golf Club. “That,” he says, “was pretty special.”

So was the fact that Cole got to play several of the major venues he covered. His name was drawn three times to play Augusta National on the Monday morning following the tournament.

Cole hasn’t missed writing as much as he thought he might. “I haven’t and that shocks me a bit. But I think it’s just that in the last two or three years with shrinking staffs, a lot of the fun kind of went out of the newspaper game towards the end. I have had a few opportunities to write this or that, but just haven’t been moved to do it.”

Watching those majors at home on TV also hasn’t been as difficult as Cole thought it might be. “I am a little bit wistful sometimes. Last year, I would have loved to have been there to watch Sergio (Garcia) win the Masters because he has been such a story through the years, but you know, in general, I just love watching golf and to be honest when you are at a major probably half the time you are sitting in front of a TV monitor anyway while you are writing. It’s not like you have never seen it before on TV. It’s kind of nice to just sit back in the living room with a beer at my elbow and watch these things.”

Cole will miss not being at Carnoustie for this summer’s Open Championship, but he will be there to visit a friend in June. He and his wife Jan are taking a three-week driving trip through Northern Ireland, Ireland, Wales, England and Scotland. And yes, some golf will be played.

They plan to play, among others, Rory McIlroy’s old home course, Holywood, in Northern Ireland. “I wanted to play courses I have never played before for the most part,” says Cole, who figures he has teed it up at more than 100 courses in Britain.

Cole is no stranger to receiving recognition for his work. Last fall, he was inducted into the media wing of the Hockey Hall of Fame and he is a two-time recipient of the Sport Media Canada Award for Outstanding Sports Writing. Cole says he never feels completely worthy of the accolades.

“As a general sports columnist, every time you get nominated for something like this for a specific sport you never feel like you deserve it. A golf recognition for me is like, really? What did I ever contribute to golf? I am way more of a taker than a giver of this game. It has been really good to me. But it’s a really nice surprise and a really great honour.”