U.S. Open Setup Relies As Much On Science As Instincts 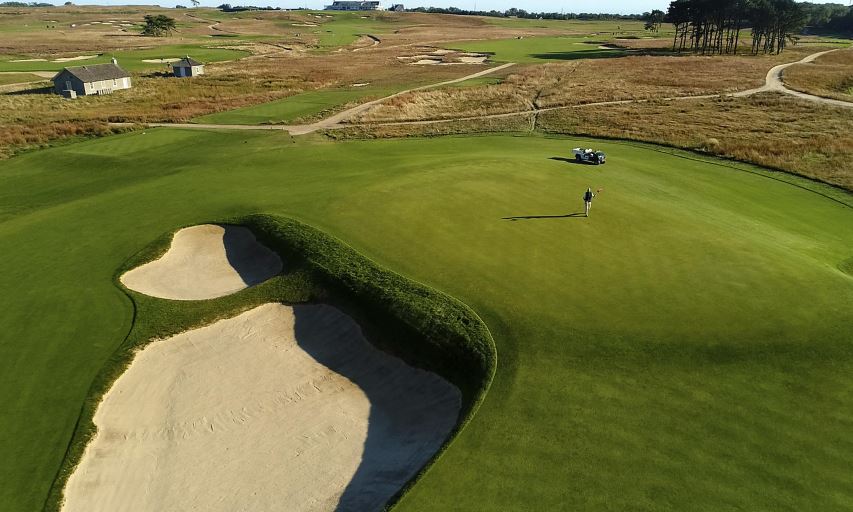 SOUTHAMPTON, New York (Doug Ferguson/AP) — The U.S. Open prefers to be looked upon as the ultimate test in golf, which can be an invitation for trouble.

Mike Davis knows that as well as anyone.

He was at Shinnecock Hills early Sunday morning in 2004 — two years before he took over setting up U.S. Open golf courses — when word began spreading that the green on the par-3 seventh hole was unplayable. Davis couldn’t immediately contact the USGA president, Walker Driver, or the man in charge of setup, Tom Meeks. So he walked onto the green, removed the flag and suspended play.

Before long, officials had no option but to put a light spray of water on the green, at first between groups, gradually with less frequency.

The U.S. Open returns to Shinnecock Hills, and it brings back as many memories of No. 7 as Retief Goosen one-putting his way to victory over Phil Mickelson.

Davis, now the chief executive of the USGA, brought it up before anyone could ask him about it.

“You saw some well-executed shots actually being penalized,” he said. “And I can assure you, that is not what the USGA wanted. And so I would just say that it was 14 years ago. It was a different time, it was different people, and we learned from it. When you set up a U.S. Open ... it’s probably set up closer to the edge than any other event in golf, and I think the difference then versus now is we have a lot more technology, and lot more data in our hands.”

After Shinnecock, the U.S. Open went through a decade of championships that came off largely without a hitch. Sure, there were some complaints. It wouldn’t be a U.S. Open without them.

But the last three years have been different.

The USGA starting losing the greens at Chambers Bay before the U.S. Open started in 2015. Poor execution of the rules caused so much confusion at Oakmont that Dustin Johnson didn’t know his score over the last seven holes. Erin Hills was so wide open that seven players finished at 10 under or better. Until that week, Tiger Woods (2000 at Pebble Beach) and Rory McIlroy (2011 at Congressional) were the only players in U.S. Open history to finish double digits under par.

Chambers Bay was a victim of poor weather in the spring, while Erin Hills didn’t get the weather — wind — it typically gets in June.

And now back to Shinnecock, and more scrutiny on golf’s second-oldest championship.

“I think they overthink it,” McIlroy said. “I don’t want to single out Mike Davis here. I think it’s a collective thought process. I don’t think it should be as much of an exact science to set up a golf course as it is. Get the fairways sort of firm. Grow the rough. Put the pins in some tough locations, but fair. And let us go play.”

But it is an exact science, at least the way Davis and his staff approach a U.S. Open.

Dating to Pinehurst No. 2 in 2005, the USGA staff has meetings each afternoon with the superintendent, agronomists and a few leaders from the host club to keep them in the loop. They spend the first half-hour looking at data points, such as the green speed in the morning compared with the afternoon. Technology at their disposal can show moisture levels from nine sections of a putting surface, which allows the crew to know which sections might need slightly more water than the others.

What follows is a close look at the weather report, a detailed forecast that tries to account for wind direction and speed at different times of the day. The meteorologist might be under as much pressure as Phil Mickelson, Rickie Fowler or any of the players.

“It’s a bit of a jigsaw puzzle,” Davis said. “The forecast is a big part of setting up a golf course. And some of it is a roll of the dice.”

At his disposal are tools such as moisture readers and TruFirm, a device that has an impact hammer the shape of a golf ball that drops onto the turf from a consistent height. How much it penetrates the ground is recorded and correlated to the firmness of the green. Those tools allowed the USGA to set up Pinehurst No. 2 equally for the men and women in consecutive weeks for the U.S. Open, one of the USGA’s proudest moments.

Joe Dey didn’t have access to that technology. Dey was the longtime USGA executive director during an era when the U.S. Open developed its tough reputation. The template back then was for narrow fairways, thick rough and firm, fast greens.

Jack Nicklaus won his four U.S. Opens in those conditions, which led to his suggestion last year that the U.S. Open was losing its identity. McIlroy wouldn’t mind it. Neither would Adam Scott, who thought Nicklaus’ observation was fair.

“These great championships stand the test of time for a reason,” Scott said, “and they’ve gone away from winning formulas.”

Davis has a strong affection for architecture, and part of his logic is to give players a test like no other while allowing them to play the way the architect — William Flynn, in the case of Shinnecock Hills — intended it to be played.

Jeff Hall, the managing director of rules and open championships for the USGA, said the philosophy would be different next year for Pebble Beach (small greens) than for Shinnecock Hills, and trying to bring out the architecture would apply at Winged Foot, Torrey Pines, Pinehurst No. 2 and other U.S. Open venues.

Ben Crenshaw and Bill Coore were behind a restoration at Shinnecock in 2012 to bring it back to what Flynn wanted. That meant wider fairways to create proper angles. But after Erin Hills, the USGA wanted to make sure accuracy was a big part of the test, so they temporarily replaced 200,000 square feet of fairway grass with fescue.

Fairways went from an average width of 65 yards to 41 yards, though that’s still wider than the 26-yard average in 2004.

“I think we have been extremely true to the architecture of Shinnecock Hills,” Hall said.

And now they can only hope the puzzle fits together and they get it right.