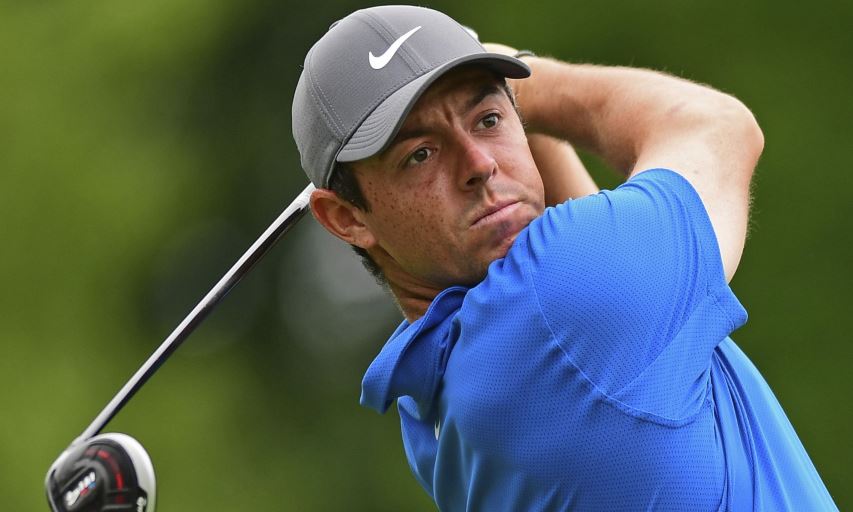 Rory McIlroy Has Missed The Cut Four Times In The U.S. Open, Compared With Once For The Other Three Majors. (AP Photo/David Dermer, File)

SOUTHAMPTON, New York (Doug Ferguson/AP) — A capsule look at 10 top contenders for the U.S. Open at Shinnecock Hills on June 14-17 (listed in predicted order of finish):

US Open Memory: Winning the U.S. Open with a record score (268) just 10 weeks after losing a four-shot lead in the Masters.

Backspin: McIlroy has missed the cut four times in the U.S. Open, compared with once for the other three majors. He at least has a victory this year (Bay Hill) heading into the major season. Goes into this U.S. Open following more Augusta National disappointment, playing in the final group with Patrick Reed and shooting 74.

US Open Memory: Winning his first major without knowing the score over the final seven holes at Oakmont.

Backspin: Johnson has lost his No. 1 ranking and hasn’t been sharp since February. Then again, he hasn’t finished out of the top 20 in stroke play since September. The problem is not seeing enough putts going in. The one area of his game that will need to get better for Shinnecock is off the tee.

Backspin: Mickelson needs the U.S. Open to complete the Grand Slam, and this is his fourth attempt. He could easily have won U.S. Opens twice at Shinnecock. In 2004, he lost to Retief Goosen and one of the great putting performances in a major. In 1995, he played the par-5 16th hole in 6 over for the week and finished four behind.

US Open Memory: Playing in the last group at a major for the first time in 2014.

Backspin: A new label for Fowler is best to have never won a major under the age 40. Fowler earned that with eight top 5s in the majors. His problem has been going backward at the start of the final round when he has a chance, and making a run when it’s too late. Last year was a good example at Erin Hills when he started one shot behind Brooks Koepka, shot 72 and tied for fifth.

Best US Open: Winning at Pebble Beach by 15 shots.

US Open Memory: Winning at Torrey Pines without having walked 18 holes since the Masters and playing with severely damaged knee ligaments and two stress fractures in his left leg.

Backspin: Woods has shown all the elements of being among the best if he could ever put them all together. He has been in the Sunday mix three times this year, and his best result was a runner-up finish at Innisbrook. This is the 10-year anniversary of his last major. His putting was good at the start of the year, not so much now. The tough conditions of a U.S. Open, with a premium on patience and course management, would seem to suit him.

US Open Memory: Hitting 3-wood from 310 yards to an elevated green on the 18th at Erin Hills and making an 8-foot eagle putt to shoot a record-tying 63.

Backspin: Coming off a breakthrough year, Thomas is getting better each week and turning average performances into good results. Faded last year in the final round at Erin Hills when he started one shot out of the lead. He doesn’t have a weakness in any part of his game. The key element for him at Shinnecock Hills is keeping his patience. He won the PGA Championship last year in firm, fast conditions at Quail Hollow.

US Open Memory: Sharing the 36-hole lead with Jordan Spieth in 2015 at Chambers Bay.

Backspin: Reed has only one victory in his last 53 tournaments worldwide, but it was at the Masters, as big as it gets. Captain America loves the grind of the U.S. Open, but it’s the kind of course that will expose any weakness in this game. The last tournament Reed won before the Masters was on Long Island. He rallied to win The Barclays in 2016 when it was played at Bethpage Black.

US Open Memory: Getting the second leg of the Grand Slam at the Chambers Bay course where his caddie used to work.

Backspin: Spieth is off to perhaps the slowest start of the year, not because he hasn’t won, but he hasn’t given himself many chances. His only opportunity was the Masters, where he closed with a 64 and wound up two shots behind. He has struggled with short putts for a little over a month. That’s getting better, and then his swing was out of whack at the Memorial. Even at 24, he’s wise enough to know one week changes everything.

US Open Memory: Posting a score that would have won or tied 26 of the previous 29 U.S. Opens, only to finish eight shots behind Rory McIlroy at Congressional.

Backspin: Day has turned the corner in his bid to return to his best form, which is not to suggest he’s all the way back. He has won twice this year, in a playoff at Torrey Pines and by two shots at Quail Hollow. He has played once three times since a middle-of-the-pack finish at the Masters (one of them a victory).

US Open Memory: Nothing beats winning. But his tie for fourth in 2014 at Pinehurst No. 2 earned him a PGA Tour card.

Backspin: He will try to become the first back-to-back winner of the U.S. Open since Curtis Strange (1988-89). Koepka felt a twinge in his wrist, and it wound up costing him four months, including a Masters appearance. Since returning, he hasn’t needed too many reps to get into the flow. He tied for 11th at The Players and was runner-up at the Colonial.