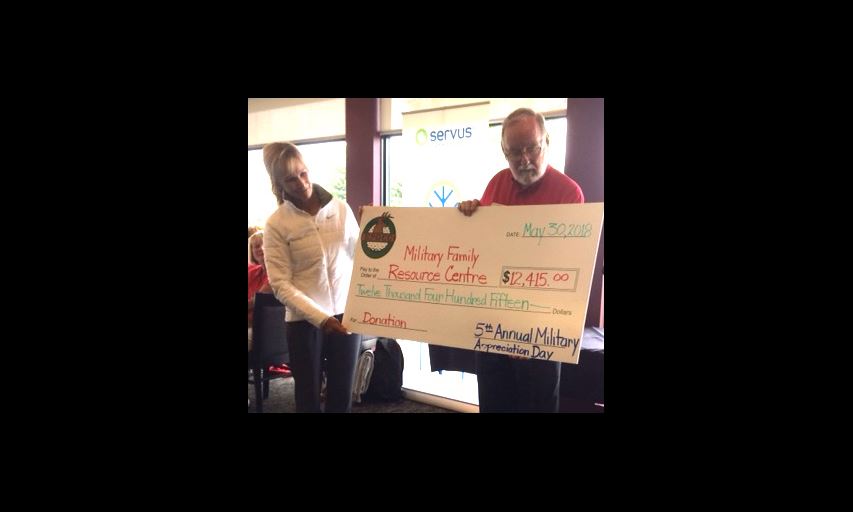 Garth Warner (R) And Michelle Ballard (L) From Servus Credit Union Were On Hand At The 2018 Edition Of The Military Appreciation Day Tournament To Pass Over A Cheque For Over $12,000, Bringing The Total Amount Contributed To The MFRC To Over $100,000 In Only Five Years. (Photo/Gord Montgomery)

PARKLAND COUNTY, Alberta (Gord Montgomery/iG) — While Military Appreciation Day in itself is a salute to the men and women who serve our country in conflict zones throughout the world, the major premise of this event is to support their families.

Through the Military Family Resource Centre (MFRC) the funds raised each year are there for many things in order to make life in the service just a little easier.

And for the past five years that’s exactly what this one-of-a-kind golf tournament has done, topping the $100,000 mark this year, thanks to the addition of almost $12,500.

The title sponsors of this 18-hole fun event, that sees a huge waiting list of hopeful participants from the CFB Edmonton, is Servus Credit Union. Garth Warner, the CEO and President of the banking facility noted, “We are so very proud to be a sponsor and to honour and support the men and women who so bravely serve, and protect, our great country. It goes without saying we are so proud to support the military members’ families who also make tremendous sacrifices for our country.”

The monies raised at the tournament go toward helping the families that stay on base while the soldier in their midst heads overseas, or wherever duty calls, to protect and serve. The funds are used for a wide variety of things such as extra expenses incurred from moving around the country, spouses trying to find employment and/or job training when relocated and single parenting stressors. While not everyone relies on the MFRC fund, it is there for all to access whether used for daycare, recreational purposes or more mundane things. All the money raised in the tournament, where every military member receives a gift of some sort, goes directly into the fund with no administration fees taken away from the total.

The overriding factor in this tournament, according to those that take part, is the fact the serving members get the chance to be a ‘normal’ civilian for a day. They get to forget the demands of their everyday jobs and partake in something that is designed for one thing — having fun. And be assured, no matter how they play and what kind of weather they play in, a good time is had by all.

Scott Hippe, the first-year general manager at the host Edmonton Petroleum Golf & Country Club said he was aware before coming on-board that this tournament took place, but had no idea of the impact it had on those it pays tribute to.

“I was talking to one guy, and he said, ‘You know what? This beats what I’ve been doing the last two weeks,’ because he’d been bagging sand in B.C. for 12 hours a day,” in the flood ravaged areas where the military had been deployed to lend a hand. “Another guy said, ‘It beats (serving in) the desert,’ ” Hippe noted.

As for his thoughts on what this means to the soldiers and what he expected the day to be like, Hippe said he wasn’t sure what to expect in his first go-round.

“The biggest thing I learned is that the money that goes to the Resource Centre, that dollar is well used. It goes to a great cause. Having the military out, saying thanks, that’s awesome. But having the money go toward the Family Resource Centre to help families with whatever they need help with, that for me is what’s special about this event.”

A large part of the success of the day is the buy-in by the private course’s members, something else that Hippe, as well as his predecessor in the GM role Grant Cammidge, are both proud of.

“It speaks volumes about our membership here,” said Hippe. “This event was started by the members. It was something they wanted to do themselves. The culture of the club here is very humble; they want to do this, love to do this. Them giving up the golf course for one morning is a small sacrifice,” in comparison to the large sacrifices those from CFB Edmonton make on a daily basis to serve Canada.