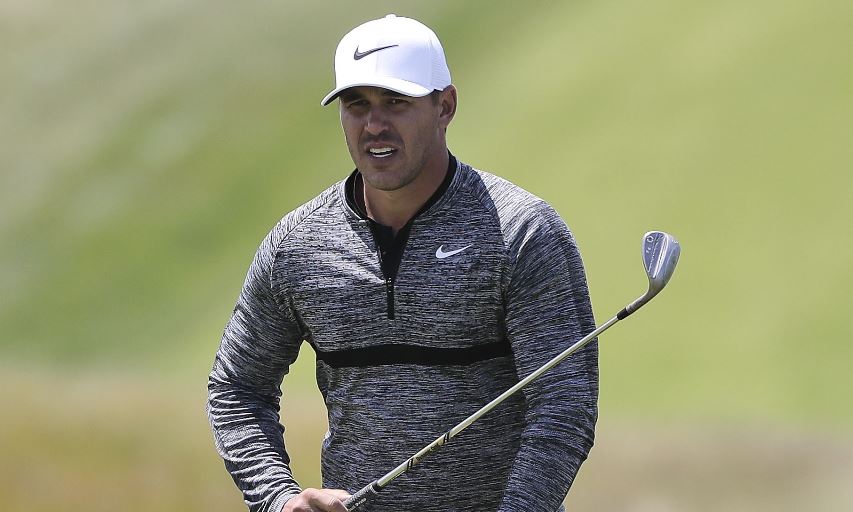 Brooks Koepka Walks Up To The 9th Green During A Practice Round For The U.S. Open. (AP Photo/Julie Jacobson)

SOUTHAMPTON, New York (Barry Wilner/AP) — Brooks Koepka scoffs when told this week’s U.S. Open at Shinnecock Hills will be a far different challenge than the tournament he won last year at Erin Hills.

Koepka, who scored his first major in Wisconsin, sees little difference in this traditional layout at Southampton and the far newer Erin Hills.

“To be honest with you, I think they’re actually kind of similar,” Koepka said Tuesday after some practice work. “The fairways are obviously not as wide, but I think the fairways out here are pretty generous. I feel like you’ve got the second shot, a couple of runoff areas around the greens where you’ve got the option to putt it if you want or you could chip it.

“Erin Hills, it’s a second-shot golf course. That’s how I see it. I feel like you’ve got to position your iron play, put it in the right spots, put it below the hole, things like that. And if it keeps firming up the way it has over the last two days, it could be a little links style, too. I could see that.”

There’s much thought that somewhere around even par will do the job this week. Regardless, what Koepka accomplished last June carries plenty of weight with his competitors.

“I just think when you look at low scores and how people talk about, you know, this isn’t what we want, this and that, people forget the fact that it poured rain that week,” said PGA champion Justin Thomas, who tied for ninth at Erin Hills. “It’s the same thing as these fairways. If these fairways, just like Erin Hills, if they’re firm, their width turns into half of what they are.

“I think that just completely gets overshadowed by the fact that people are like, ‘Oh, you know, he shot so much under par, it was soft, this and that.’ Well, he beat the brains out of everybody else pretty good, and he won a U.S. Open, and it doesn’t matter what the conditions are and what the golf course is.

“I mean the fact that he won a major championship by however many shots he did, heck, I would have no problem with anybody saying that about me if I won every major.”

Like Dustin Johnson and Thomas — currently ranked first and second worldwide — Koepka is a bomber. In one practice round, he drove into a greenside bunker on the 399-yard first hole.

So a hard and fast Shinnecock wouldn’t necessarily be a detriment for him.

“It’s starting to firm up. The pitching areas are definitely a little firmer. The balls aren’t quite stopping on the greens the way they were,” Koepka said. “But the fairways are pretty generous. You should be able to hit them, but it will really be a second-shot golf course.

There was a time earlier this year when Koepka couldn’t be sure he’d be defending his title.

Koepka won the Dunlop Phoenix on the Japan Golf Tour last November. The next week he was hitting balls to get ready for the Hero World Challenge in the Bahamas when he felt pain in his left wrist. It hurt all week in the Bahamas, where he finished last against an 18-man field.

Koepka didn’t touch a club until going to Hawaii for the Tournament of Champions in January. He finished last against a 34-man field.

Eventually, he underwent wrist surgery, wore a cast for two months and didn’t touch a club for three.

He returned in New Orleans for a team event and missed the cut. Then came a turnaround, finishing 11th at The Players Championship and second at Colonial.

So the confidence level is high.

“Yeah, I mean, you go from playing some of the best golf I’ve probably ever played to probably being at the lowest point professionally that I’ve been. It wasn’t easy,” he said. “Thankfully, we’ve got it situated now where I’m 100 percent past it. But I’ll tell you what, it was a long four months. It wasn’t anything I’d wish upon anybody.

“But, you know, coming back quickly, I feel like my body recovers pretty quickly. I feel like it was — don’t get me wrong, it was a lot of hard work for about a month there. Once we got the all clear, run to do everything, taking all the right steps, the rehab, doing everything we needed to do, it’s amazing how strong you can get so quickly.”

Strong enough to be the first man since Curtis Strange in 1989 to repeat?

“I feel like every major championship, we do a pretty good job of that,” Koepka said of his preparation for the U.S. Open. “I feel like we’re always hanging around the top 10. To finally win one was so gratifying, to be honest with you. Hopefully do it again this week.”