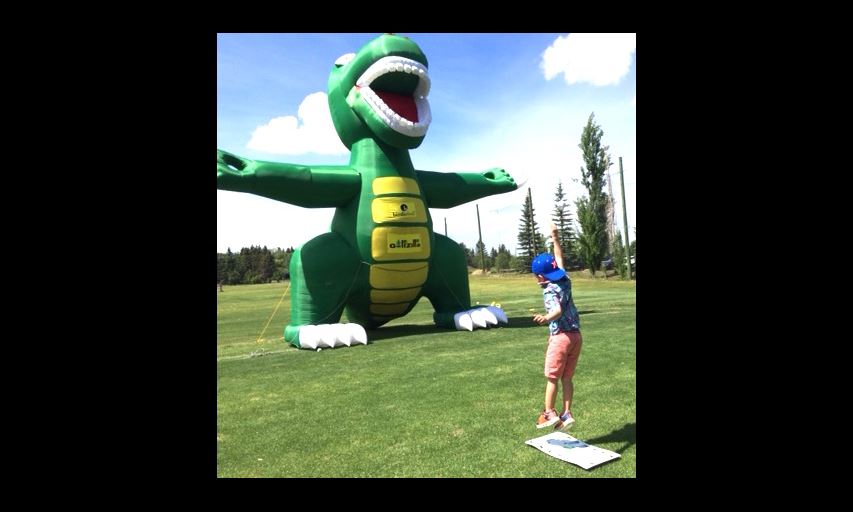 This Little Guy At The Junior-Junior Golf Progam In Stony Plain Sets Up To Take A Shot At Golfzilla. Who Looms In The Distance. (Photo/Gord Montgomery)

While some may think that four is too young to start a kid in golf, the Stony Plain Golf Course, and their professional staff, beg to differ. After all, how else do you explain their overwhelming success over the years, with their Junior-Junior learn-to-golf program?

While this program, for kids aged from four up to 10, has morphed several times over the years it’s run, it always comes down to the same thing in the end: Giving kids the proper start in the game.

Jordan Murphy, a Class A professional at Stony who is running this program, said kids are starting to come back to the game after a bit of a decline in the recent past because kids/parents had so many sporting options to choose from. The return to golf, Murphy feels, is due to a few things the local club is doing.

“We’re just trying to market it more, get back to when we had 200 kids at one point,” he said. “We’re trying to add more things to make it more exciting for the kids to be at the golf course. Today we’ve got Golfzilla out here,” a large inflatable which the kids were eagerly firing off Birdie Balls at. “Plus, the addition of SNAG (Starting New At Golf) equipment out here is getting the kids out and having more fun.”

While every kid that shows up at the course likely has swung a club in their own backyard alongside dad and/or mom, there’s much more to this four-week program than just swatting driving range balls. The kids are taught the safety elements of the game and respect for others.

“We start with doing the grip, stance and the basics behind the game,” Murphy continued about what takes place when the kids start. “We also introduce the short game to them (with the SNAG gear) and then in the third week we get them using real clubs and they hit actual balls. The last week, they have a little (fun) tournament,” on the Stony Plain four-hole mini-course.

While every sport involving kids has its dropouts, Murphy said the return rate for this program is becoming quite strong as kids’ skills improve and they gain more interest in the sport.

“We see a lot of familiar faces and a lot of kids that have come back through the program. We keep trying to change it through the years so they keep coming back and learning something new, but again, it’s all about reaffirming the basics from the past years. But definitely, we’ve seen a lot of kids over the past few years that have taken it two, three, four times.”

Interestingly enough, one of the past ‘graduates’ of the Junior-Junior program in Stony Plain, Jackson Berndt, is now a professional at the Stony course and one of those teaching the youngsters about the game. While taking a breather during a session, he said this idea is what hooked him on the game and led him to his present career. He emphasized how important this early introduction to the game is.

“I actually find it very valuable. This is where I got my start. Where I met my friends. We always came to the golf course from then on. And obviously learning the fundamentals, but this is where I met people that were like myself and that’s kind of how I grew to love this game.” 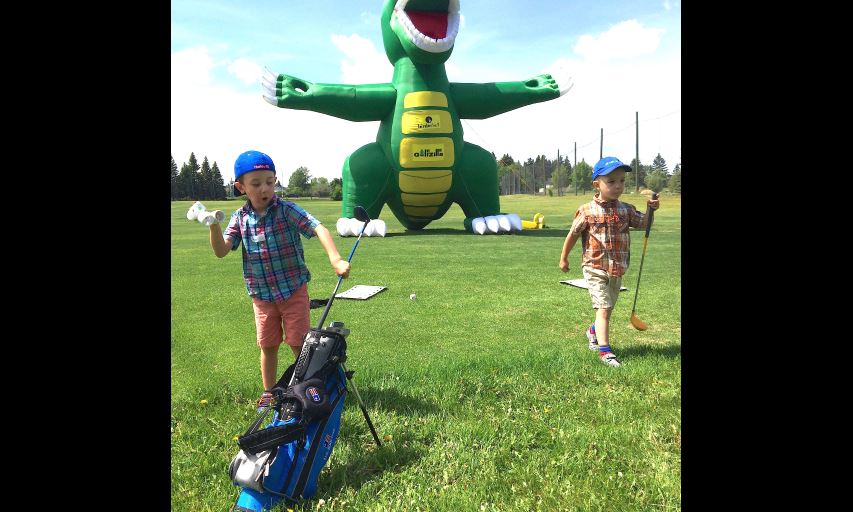 Apparently The Selection Of Clubs Wasn't Quite Right To Bring The Big Guy Down The First Time Around, So These Two Are Heading Back To Their Bags For Some Bigger Calibre Weapons. (Photo/Gord Montgomery)

As for the once-a-week outing on the driving range for the little people, Berndt said in his opinion that’s plenty of time for structured lessons. But at the same time, there’s nothing wrong with the tykes whaling away in the backyard on other days, under a parent’s guidance, of course.

“You know what? Of course you want to be out here practicing, but you don’t want to wear them out,” he said of throwing kids into the deep end of the pool too soon. “You want to keep it fun, keep it light.”

One of the parents on hand, Jeff McAdam, is an avid player himself and to him, this is a great way to have his son meet other kids and at the same time learn to take advice from other adults. Like many kids here on this day, the young McAdam, who is four, has beat balls around the yard at home but hadn’t been exposed to the game in this more structured manner.

“This is the first time he’s been into golf like this, the first time he’s had any sort of instruction. I think he understands the premise of the game, that the ball is supposed to go in the hole. As for the technique, the ability to get it there is what they’re learning.”

Jeff said his son loves what’s going on and that is likely due to some home-based inspiration.

“Yeah, he knows he’s coming here every Sunday for his Junior-Junior. I love golf and spend lots of time golfing, so he knows that. We watch golf on TV, so he sees it all the time.”

McAdam, agreed that getting proper instruction for his son, or for any kid starting new at the game, is a huge benefit in having them start into the sport on the right foot.

Interestingly enough, while the Tiger Woods-mania that swept the golf world for young and old alike so many years ago has pretty much died out, there are new golf heroes on the market today, and yes, the kids do know who they are in a round-about way.

When Murphy asks the kids who their favourite golfer is, the answer isn’t quite as high profile an athlete as you might expect.

“I’m not sure they’re quite old enough yet to know who those guys are … but they all wear the (Jordan) Spieth hats,” said McAdam of kids looking up to the pros as role models.

But if you want someone in particular who stands out, well there is one guy leading the charge, Murphy feels. “I’d say Rickie Fowler is one of the bigger answers we get given his style with the colours, the orange,” meaning that at four years of age and up, these kids are realizing what the game is about, are getting a great start and are beginning to grow into the game that can easily last them their entire lifetime thanks to the dedication of the pros at the Stony Plain Golf Course.