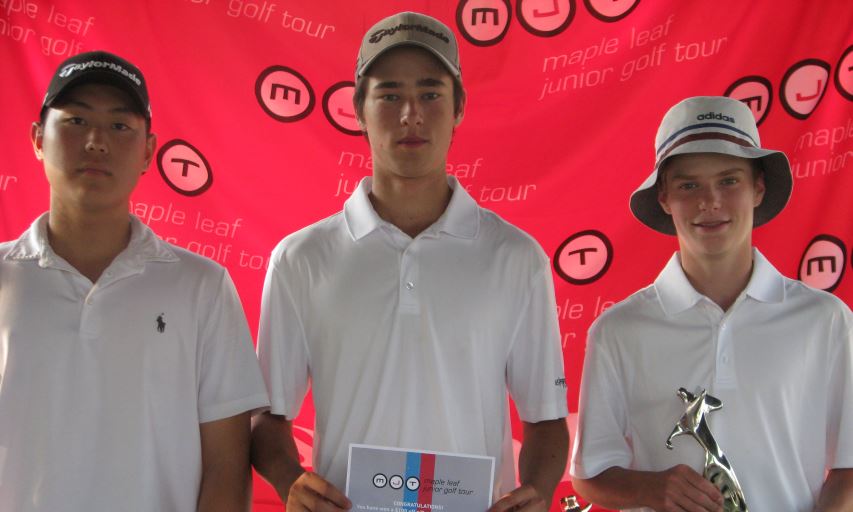 CAMBRIDGE, Ontario (MJT) — Over 90 Junior golfers played in extreme heat, with the humidex reaching 40 degrees Celsius, at Galt Country Club in Cambridge, ON, this past Father’s Day weekend, in the Maple Leaf Junior Golf Tour’s MJT-PGA of Ontario Junior Championship on June 16 and 17. Hoselton trophies were up for grabs in six age divisions, including an impressive Girls field of 36 players, in this major-ranked stop on the Boston Pizza-presented Tour.

Graem Costigan, 15, of Cambridge, ON, impressed his hometown by firing 73-72 (145) to win Low Overall and the MJT-PGA of Ontario Juvenile Boys Champion title. “It feels great (to win),” Costigan said. “The course was in great condition and I made a good up and down on the 18th to save par. This is my first win of the season.” Nine shots back was his closest competitor, Isiah Katsube, 16, of Elmira, ON, who fired consecutive rounds of 77.

MJT newcomer, Landon Underhill, 14, of Aylmer, ON, battled back from five down after day one to capture the MJT-PGA of Ontario Bantam Boy’s Hoselton trophy with a two-day total of 154 (80, 74). “I wanted to play MJT to expand my golf career and try to play with some new competition,” Underhill said. “It feels great to win.” Runner-up was Matthew Whitehead, 13, of Cambridge, (78, 77=155).

Taking the title in the MJT Peewee division despite his hands keeping on slipping due to sweat was 12 year-old Ryan Zhao of Toronto, ON, who was impressive in the first round shooting an even-par 72 and finishing the tournament at 150, good enough for an eight-shot win overJeremiah Walker, 11, of Burlington, ON. “On round one I had a shot on hole nine that was 178 yards and took a five iron and put it to three feet for birdie,” Zhao said of his best hole in the tournament. “I feel happy (to win) as I played good when it was way too hot.”

In the Girls u15 division, the Champion’s trophy went to 13-year-old Nicole Gal of Oakville, ON (78, 80=158), with a tie for second place at 166 total score between Bo Brown, 14, of Mississauga, ON (89, 77) and Katie Cranston, 14, of Oakville (79, 87). Gal, in her second season on the MJT, said, “I feel very proud because there were lots of girls in my division and I shot one of my best scores. I chose MJT because the players are nice, they host tournaments at really nice courses, and they have good prizes and pizza!”

In addition to the individual division champions featured above, overall event highlights are posted on the MJT website here which show winner details for the PLYR Long Drive, PLYR Closest-to-the-Pin, MJT Comeback Award as well as the MJT Academy Program Point Standings. Shortlist positions on MJT Team Canada to the Nordic Team Matches in Estonia, JNJG International Junior Classic in Australia, US Kids Golf World and Teen Championship were also all on the line this weekend with finalists being announced once qualifying completes across the country.

The next Maple Leaf Junior Golf Tour stop in Ontario is the MJT Canada Day Classic at Tarandowah Golfers Club in Springfield, June 30 and July 1, which features a qualifier for the MJT International Players Championship presented by Miura Golf at Fairmont Jasper Park Lodge in Jasper, Alberta, this August. For more information or to register, please visit www.maplejt.com or call 1-877-859-4653.

About the MJT
The non-profit Maple Leaf Junior Golf Tour presented by Boston Pizza is Canada’s number one-played Junior Golf Tour as well as the only national junior tour run exclusively by PGA of Canada Professionals and the ‘Road to College Golf’ in Canada. The organization is presented nationally by Boston Pizza and supported by valued Premier, Tournament and Product Partners. The MJT hosts more than 70 events across Canada, including free Ford Go Golf Junior Clinics, the MJT Mini Tour for 7-12 year olds, the Collegiate Tour for 19-23 year olds, and multi-day events for competitive players aged 11 to 18, which are also qualifiers for international competitions. The program offers annual awards, scholarships, and frequent player incentives to help reward player's performance and participation throughout each season. MJT alumni include many Professional Tour players and PGA of Canada Professionals, as well as Canadian Amateur, National and Provincial Junior Champions. The MJT aims to develop champions, in golf and in life, promoting the game from grassroots through to provincial, national, university and professional level. For more information on the Maple Leaf Junior Golf Tour, please visit www.maplejt.com