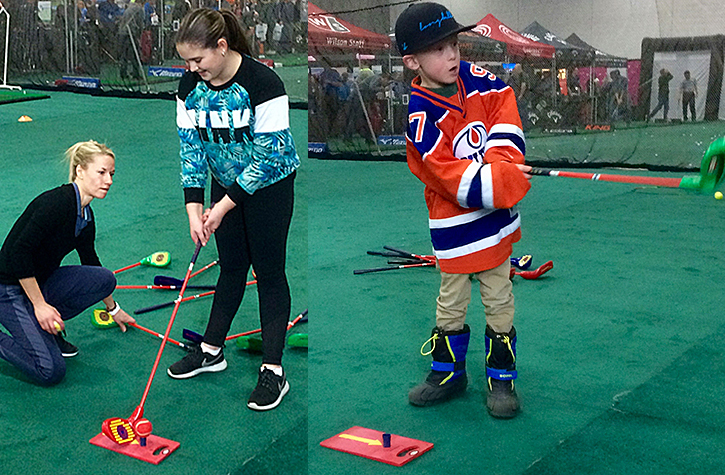 Jeanine Sears (L - With Club) From The Derrick Golf & Winter Club In Edmonton, Works On Proper Swing Mechanics With A Young Lady During The PGA Of Alberta's Edmonton Golf Show, While Another Young Man Experienced Success Using The SNAG System After Going Through A Series Of Drills That Included Throwing The Ball Instead Of Hitting It - Images Credit Gord Montgomery

EDMONTON — Golf is hard. Ask anyone that has ever tried to learn the game. The thing is, the earlier one gets a club in their hands, and receives proper instruction, supposedly the easier the game becomes.

That’s why Jeanine Sears and Josh Copeland from the Derrick Golf and Winter Club in Edmonton were busy herding kids at a junior clinic at the PGA of Alberta’s Golf Show in Edmonton. But their instruction went far beyond stance, set-up and swing.

After all, there are a few primers the youngsters should go through prior to whaling away. “Today we’re just developing motor skills,, running, jumping, throwing, because you really can’t golf here,” said Copeland, a Class A professional, about being set up in an exhibition hall.

“That’s the thing about junior golf - people make a mistake by throwing (real) clubs into kids’ hands at too young an age.”

To have the kids learn what it takes to put a ball into motion, the pair used the SNAG system, which is a tremendous help in teaching the game, said Sears, a CFM. “We want to make them better athletes all around; make them physically literate,” she said of drills that included throwing balls as much as hitting them.

To that end, the throwing component the pair were working on with the kids has a definitive purpose. “Golf is a rotational sport just like baseball, just like tennis,” Sears explained. “So we need to make sure we can generate power between the upper and lower body. We’re just practicing having the kids move properly and throwing is a perfect example of that.”

Copeland said the Derrick Club uses a minimum age, generally 3-years old, before starting the kids down the learning path. Sears added that a big part of the game is learning what goes on outside of playing the game. “We’re really wanting to get kids familiar with being around the course, being comfortable at the course, liking being at the golf course. We’re not worried about them being able to stand on the range and hit balls for hours.”

To her, it’s not a good idea to have your child play one sport and one sport only at too young an age. After all, by honing skills in a variety of sports it can morph into better performances down the line in a chosen activity.

“Fifteen, 16, 17,” was her response in when a youth should start to focus solely on a sport like golf if the talent, and the desire, are there.

As to instruction like the kids were getting at the show, or at a course, it is best if parents invest a few dollars in having them started on the right path in a game that is, to say the least, difficult.

“There are kids that can walk in and be a natural at it, but for the most part every sport takes time to learn,” Copeland noted about proper instruction early on.

In closing, Sears said she’s a big fan of group lessons for kids because, “Golf is a very individualized sport so that’s why a lot of kids don’t like it. But if we can do group stuff we can get kids involved with their friends,” which will help not only improve their love for the game but their skills in the game as well.