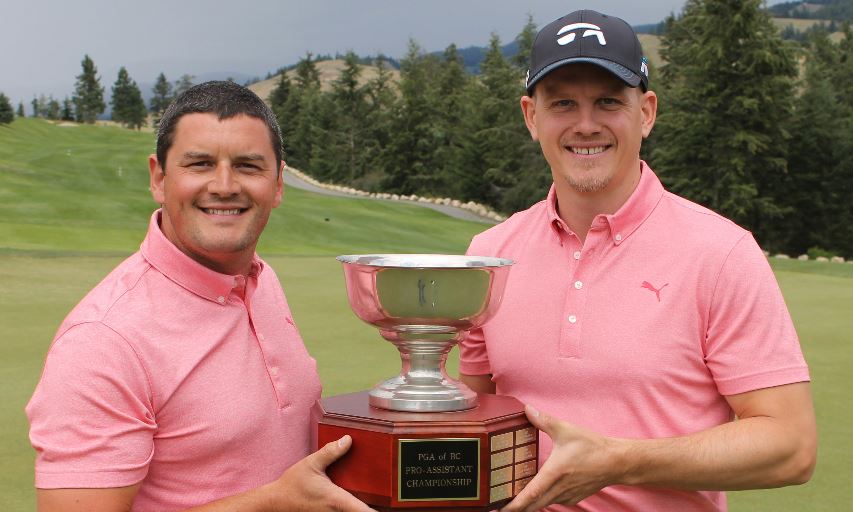 Neither Presnail or Kitts had previously won a PGA of BC championship tournament, and the victory was worth $2,500 for the Shadow Ridge duo after they defeated Northview Golf Academy's Matthew Palsenbarg and John Shin on the extra hole.

“James had a hot putter today and made a ton of putts for us, and I drove it pretty good,” said Kitts. “We gave ourselves opportunities and capitalized.”

The Pro-Assistant Championship is a unique event that sees a PGA of BC Club Professional pair with an assistant from their facility to compete against their colleagues over 36 holes.

After Monday’s best-ball round, Presnail and Kitts found themselves trailing Palsenbarg and Shin by two strokes. They made up the deficit with 12 birdies and an eagle on Tuesday and matched the Round 1 leaders with a 36-hole total of 21-under, as Palsenbarg and Shin posted a 59.

“(Kitts) hit every line today but just left them a little short,” said Presnail. “So I just reassured him: ‘Make sure you get it there.’ I knew he’d get it in there and I felt pretty confident that we’d walk away with four.”

Though they came up just short of repeating their 2016 win in the Pro-Assistant Championship, Palsenbarg and Shin still left the event feeling good about their performance over the two days.

“We played solid,” said Palsenbarg. “We thought maybe it would be good enough, but obviously those guys got hot today and got it done.”

Added Shin: “Overall, I’m happy. It’s too bad that I missed a short one over there (in the playoff), but that happens and it was fun to have a chance to take this title again. It was exciting.”

Presnail and Kitts had never played the Pro-Assistant Championship together as a team, as Kitts only joined the Kelowna facility earlier this year.

“I was surprised,” Kitts said of the team chemistry he and Presnail quickly formed. “I think you just have to go play golf and play your own game. James played great, I played very good as well.”