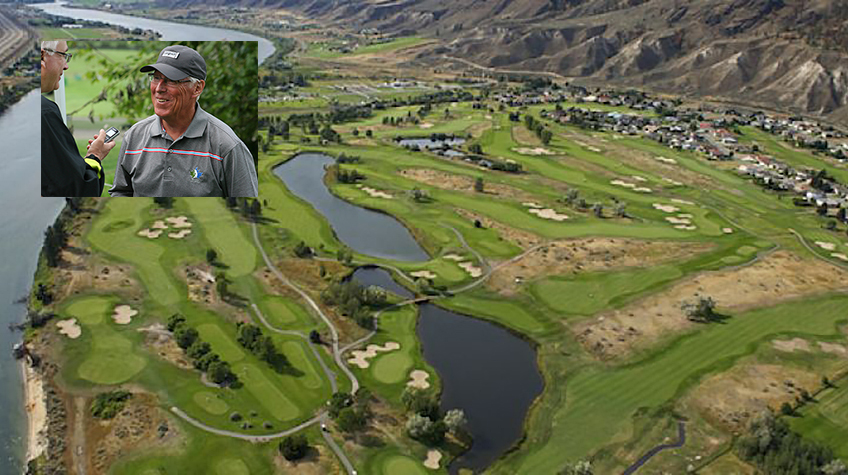 KAMLOOPS, British Columbia — Doug Roxburgh, a soft-spoken guy not given to hyperbole, is effusive in his praise of Rivershore Golf Links, the site of this week’s 116th playing of the B.C. Amateur Championship.

“I love this golf course,” Roxburgh says of Rivershore. “For me, it is one of the top three in the province with Capilano and (Royal) Colwood. I really like the variety of holes, the water, the sand. It is a really good test of golf. And it’s totally fair.”

That is high praise indeed from one of the most respected and accomplished individuals in Canadian golf. For those who have lost track, the 66-year-old Roxburgh is playing in his 52nd consecutive B.C. Amateur Championship, a tournament he has won a record 13 times.

Rivershore, located about 20 minutes east of downtown Kamloops, sits between sagebrush-covered hills and the South Thompson River. It opened in the late 1970s and is one of only a handful of Robert Trent-Jones Sr. designs in Canada.

The course features lots of bunkering -- a Trent Jones Sr. trademark. There are 96 sand traps at Rivershore and staying out of them is one of the keys to scoring success. “I think you have to position yourself well off the tee here,” general manager Kerry Ward says in an interview. “The bunkers are plentiful and they are well-positioned. They are not just there for aesthetics.”

Ward is in his 17th year at Rivershore. He started here in 2002 as head professional and seven years ago became general manager. The course has about 400 members who account for between 70 and 80 per cent of the play at Rivershore, which welcomes outside play. “We are fortunate to have a lot of guest play from the Lower Mainland, the Interior, but we certainly always welcome more guests to come and enjoy the property,” Ward says.

First-time visitors will find a course that is well-conditioned and straight forward. Everything is pretty much right in front of you. It’s also an easy walk, providing you aren’t playing on one of those extremely hot summer days when temperatures can top out in the high 30s.

“The design and layout is extremely strong and extremely fair,” Ward says. “The course plays tournament condition almost daily. The layout is what people really treasure. There are no trick shots, everything is laid out in front of you, which is very characteristic of Mr. Jones’ designs.”

Kevin Carrigan, the two-time Canadian Mid-Amateur champion from Victoria, had not played Rivershore until this week’s B.C. Amateur Championship. He has quickly fallen in love with the course. “It’s awesome,” Carrigan says. “I love the layout. There are a couple of blind shots, but that is about the lay of the land. Once you play the course, you quickly figure it out. There is no intention to trick you. I like that.”

Rivershore can play anywhere from 5,458 to 7,002 yards. And because of the nearly ever-present wind, the course never plays quite the same twice. It features a number of strong holes.

The 228-yard par 3 17th which runs along the South Thompson River, gets mentioned a lot. The four-hole 8-through-11 stretch is especially strong. It starts with a risk-reward par 5, followed by two demanding par 4s and finishes with a long par 3 guarded by water on the left side. “A lot of golf courses have their Amen Corner and that so to speak is our Amen Corner,” Ward says.

Roxburgh, who won the annual Overlander Senior Men’s tournament at Rivershore last month, said he has been struck this week by the wonderful condition of a course he has played too many times to count over the years. “I have played this one a lot,” he says. “A bunch of us would come up to the Ogopogotourney (in Kelowna) and we’d have a free day so we’d make a point of just driving over and playing here. It is in beautiful condition.

"They have done a great job of bringing it back. It suffered a bit a few years ago. They are famous here for the tees, which were just like putting greens. And a lot of them are getting back to that state.”

Green fees for out of town guests at Rivershore are $90. For more information visit rivershoregolflinks.com.