Become An ‘Easy Rider’ At The Pineridge Golf Resort 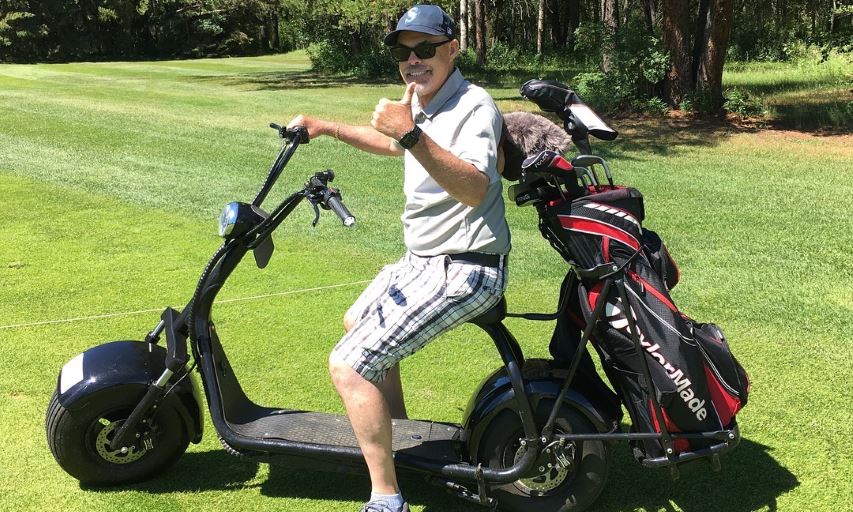 Inside Golf Writer Gord Montgomery Finally Slowed Down Enough To Have A Photo Taken Of Him On The Coolest Mode Of Golf Course Transportation Ever — A Motorcycle! (Photo/Jane Watson-Montgomery)

SEBA BEACH, Alberta — Despite its difficulties and frustrations, golf is meant to be fun. So, Pineridge Golf Resort, near Seba Beach, Alberta, is stepping outside the proverbial tee box to add some more enjoyment to the game in a unique way.

In today’s golf world the vast majority of imbibers prefer to motor around a course rather than walk. And that’s fine. After all, some courses call for a ride because of the distances between holes, if not the length of the holes themselves. And that’s where Pineridge is stepping up their game — by offering rides of an unlikely sort.

The 12-hole course, the only one in Alberta by the way, is now renting out two other modes of transport to truck you around their layout, including really cool motorcycles as well as Golf Boards and of course the old reliable four-wheel carts. They also have Segways on tap, but they have yet to be put into play.

“They’ve really added to the fun of the game of golf,” commented Nicole Richardson, Pineridge’s owner and general manager about these additions. “We’re looking at getting a different market interested in playing golf. It’s not always the traditional market that everyone perceives. The motor bikes have been really popular.”

Being one who has to try everything new in the golf world, I settled onto one of the little ‘hogs’ recently and after a somewhat shaky start (going slow is tough; a little speed finds the bikes much easier to control. It’s a balance thing) I was off and cruising. Your clubs are fastened securely to the back of the bike by a couple of bungee cords, so there’s no fear they’re going one way while you’re headed the other. 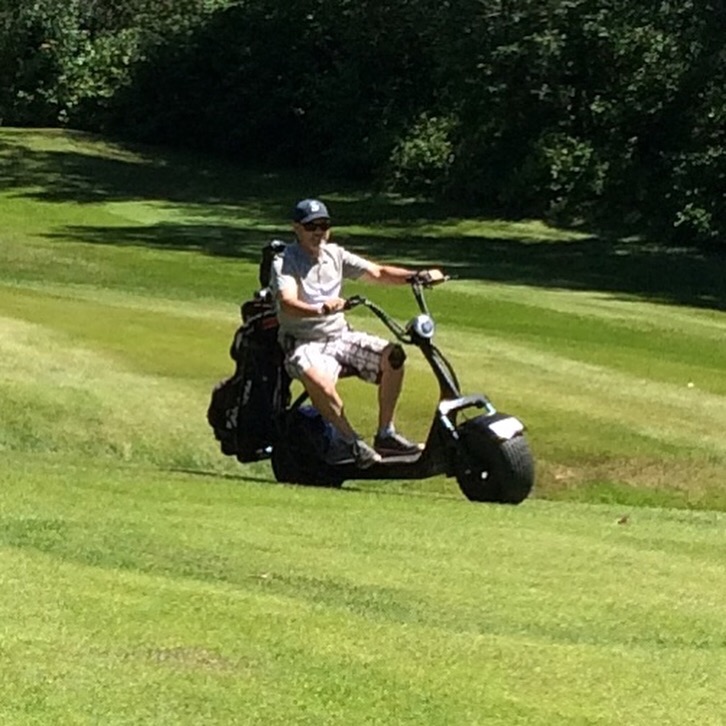 Montgomery Found Riding The Golf Motorcycle As Much Fun As Playing The Course At The Pineridge Golf Resort, West Of Edmonton. (Photo/Jane Watson-Montgomery)

The top end speed for the bikes, which are electric, is 11kmh, or equivalent to a power cart. But again, these things are way, way more fun than a 4-wheeler!

Like any variance to motorized travel on a golf course there is a liability issue. Riders must watch a short video and sign a waiver prior to getting on either the Golf Board (like a motorized surf board) or a motorcycle.

“As long as we know they’re aware of the precautions they need to take, and will take them,” said Richardson about riders being fairway-smart. “You’re not allowed to drink or take drugs prior to, or when you’re on them. Because of that we have a little program where if people take a picture of themselves using it and post it to social media, tagging us in it, we’ll give them a complimentary beer, or drink of their choice, when they come back (safely) here.

As for stepping outside the normal bounds of the golfing world in this way, Richardson stated the buy-in by the public (and yes, this writer) to these modes of travel on the golf course is huge. And really, when you’re having fun like this, those bogeys, or worse, don’t really matter.

So be assured: This is one guy who has lived out yet another fantasy and while I may not be a modern-day version of Easy Rider’s Peter Fonda or Jack Nickolson, who cares? I had blast and I finally got to live out a childhood fantasy!