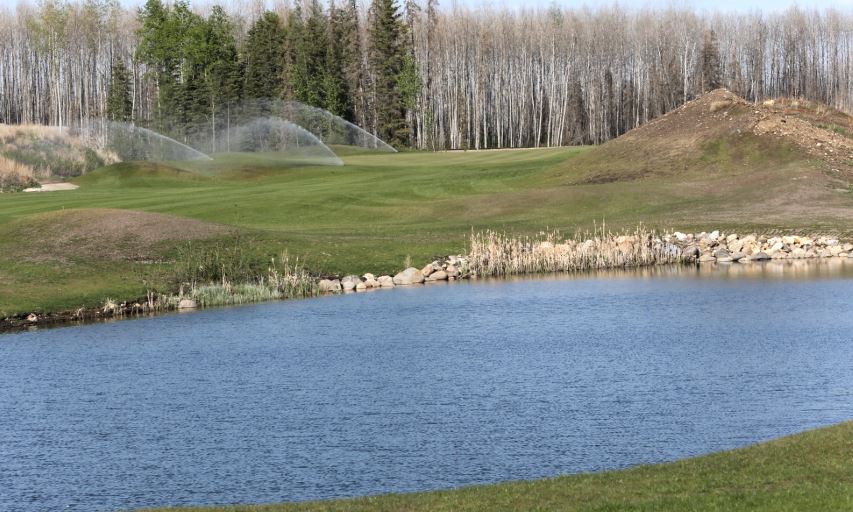 FORT McMURRAY, Alberta — Affordable. Accessible. And more than anything, able to give back to the community.

That’s the mantra behind the newest golfing playground in Fort McMurray, AB, Rotary Links @ Wood Buffalo. With nine holes now in play, it’s hoped to have 18 up and running in the next few years, said CPGA pro Brent Mackay, who is acting as the general manager of the newest venture backed by a city service club.

Mackay explained that the idea of a service club building and running a golf course, in this case the Rotary Club of Fort McMurray, while unusual, came about in order to supply the local demand for the game. Before Rotary Links swung into action this past July the community had limited access to tee times at the two existing courses so the decision was made to improve that. Funding that allowed this project to be teed up came from the service club’s successful operation of a campground that for years donated funds back into the area to help with any number of local causes.

“When they started it was pretty modest, maybe $25,000 a year that they took away from the campground for charitable contributions. By the end of its lifecycle, they were pulling in $75,000, $80,000 annually that went to different initiatives they had in place,” began Mackay on how this idea came to fruition.

“The whole idea of a golf course probably started around 12 years ago. The economy was in a different place at that point. They looked at numbers. At the time there was, probably conservatively, 80,000 people in the city and it was a city of two golf courses.”

The Rotary put together a partnership proposal they presented to the City of Fort McMurray and a developer, allowing them to obtain some additional funds in order to get this idea off the ground. That partnering pair were responsible for the build of the on-site stormwater drainage system that is now used by the course for irrigation purposes and water hazards.

Because of the downturn in the oil industry, it was decided to slow down the construction process, doing the nines at different times. While it wasn’t an ideal situation, it did afford the Rotary Club the ability to continue with the plan of putting at least nine more holes into play in that crowded golfing environment.

An original scheme called for a hotel complex on the site that would act as the food and beverage portion of the business. That plan went OB however given the state of the economy in Alberta, and especially Fort McMurray, at that time. As of right now, the housing development is on hold, although the initial interest was there with the developer selling 80 lots. “There was definitely interest in living on a golf course within the city because both existing courses will never have that opportunity,” due to zoning laws, Mackay pointed out. “Now, with all of that, it’s sort of become the chicken before the egg sort of thing. It’s sort of a five year plan turned into a 20 year plan sort of thing.”

One major change came about when the second hole was moved to make way for a parking lot and the temporary clubhouse location. Thanks to some course re-routing decisions it was decided to put nine holes into play, for a very good to reason.

“It gave us the opportunity to generate some revenue as opposed to sitting on our hands and waiting for the 18 holes to open.”

And as it turns out, that was likely a great idea as the public’s reception of the new nine has been positive, both for playability and pricing.

“The original plan, right from the get-go, was always to offer the community golf at an affordable and perhaps more importantly, an available option,” Mackay explained. “Even though the Fort McMurray Golf Course added a third nine, there is definitely room for more. The two existing courses are priced similarly where you’re paying upwards of $100-plus for 18 holes with a cart which can be quite alarming to some people who may be new to the city. The initial reaction here has been quite positive. We’re actually seeing more people out than anticipated.”

Over the remained of this season, Mackay said the club expects to secure their liquor license; full lounge service will be added; a deck off the temporary clubhouse location will be opened; and the opening of their driving range and practice area.

Mackay noted that right now there are three extra holes that could be put into play, but that 12-hole loop idea comes down to a matter of dollars and cents. He said a 12 holes has been bandied about, but the cost of maintaining those extra tests may outweigh the value of putting them into play.

The final completion timeline on all 18 of the Les Furber design remains up in the air at the moment, contingent on a few factors including access road issues. But for now at least, the service club is pleased with how the public has received the new links layout.

“I would like to see in five years construction at least completed or in the process of finalizing those last few holes, and then moving into a growth cycle and then seeing play happening on all 18 holes. Like I said, it’s all up in the air right now but I am hearing a lot of positive things,” in regard to the oil industry finding its feet again after a struggle.

“Things are looking positive,” ended Mackay, referring not only to the continued growth of this new golf course but to the continued financial support the Rotary Club offers to needy organizations in the community.