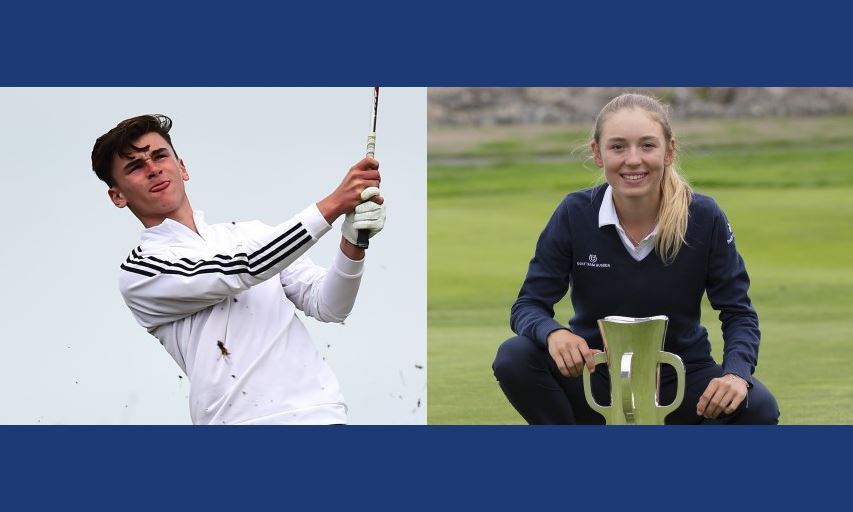 Gough becomes the first Englishman to lift the trophy since Matthew Fitzpatrick’s victory at Notts (Hollinwell) in 2012. He will now play in The 124thAmateur Championship at Portmarnock and The Island, and gains an exemption into Final Qualifying for The 148th Open, also at Royal Portrush, as a result of his victory.

Delighted Gough said, “I feel incredible. It’s a dream come true. I never thought it would have happened this year. I knew I was playing well but I didn’t quite think I’d go this far. Now I’m here the winner so I’m really happy with myself."

The 15-year-old teed off for the second round of the final 2up over Ballester after a closely contested opening 18 holes of high quality golf. Neither player manged to advance further than a one hole lead until the par three 16th where Ballester, at 1-down, faltered with a bogey. Gough went further ahead thanks to a birdie at the 17th but the Spaniard hit back on the next to reduce his opponent’s lead to two holes heading into the break.

Gough stumbled in the early stages of the afternoon round with a double bogey at the 20th and a bogey on the 21st which enabled Ballester to square the match once more. The lead continued to swing to-and-fro on the front nine with neither player able to build a commanding lead.

With the crowds building, the key moment came at the par four 29th. Having watched Ballester roll in a 20ft putt for birdie, Gough stood over his own which rested around 15ft from the pin. Under pressure, he read the line brilliantly and used the break off the left to find the hole.

On the next, both players found the bottom of a steep embankment with their approach shots to the green. Ballester showed his touch to pitch close to the pin from the heavy rough but Gough went one better as he delighted the crowd by chipping in for eagle and a one hole lead.

Gough, who already has two wins under his belt this season having claimed the McGregor Trophy in July and the boys’ title at the Fairhaven Trophy earlier in the year, never looked back from that point and grew in confidence as the match neared its conclusion. He carded another birdie at the par four 32nd to double his lead and required just a half for victory at the 35th.

“I have had an incredible season. I don’t think I have finished outside the top 12 in any competition this year so I am just playing really well and I’ve managed to keep the form going," said Gough after his win at Portrush.

When Ballester’s tee shot landed in a gorse bush to the left of the fairway he deemed the ball unplayable and took a drop under penalty of one stroke. Sadly, the young Spaniard’s approach fell just short and found a greenside bunker at which point he conceded the hole and the match to the Englishman who completed a memorable 3&1 victory.

The 18-year-old emerged from a field of 144 competitors from 24 countries to seal the biggest victory of her amateur career, joining a roll of honour that includes Anna Nordqvist, Suzann Pettersen and the new Ricoh Women’s British Open Champion Georgia Hall.

Following today’s success, Spitz has earned an exemption into Final Qualifying for the Women’s British Open next year and will bid to secure a place in the starting field for Woburn.

“It’s my biggest win,” she said. “It was a great final match and I thought we both played really well. The wind was a little bit less than in the morning so birdies were needed to win holes. We had seven between us and I was just pleased that my putter was working.

“We have played together since we were eight years old so we know each other really well. We have played against each other so many times in match play already. It’s always a hard match against a teammate and winning is pretty cool.”

In front of a healthy crowd at the County Down links, Spitz raced into an early advantage in the showdown between childhood friends. Spitz, ranked 59thin the World Amateur Golf RankingTM (WAGRTM) and almost 300 places above her opponent, moved to a 3up lead after five holes including a fine birdie two at the par three 5th.

A bogey at the 6th offered Holpfer hope and after both players birdied the long 9th there was more joy for Holpfer when a par was good enough at the short 10th to reduce the deficit to one hole.

With the spectators enjoying the action in the afternoon sun, Holpfer completed her comeback at another par-three, this time with a birdie at the downhill 12th.

Just when the 17-year-old had high hopes of adding to her Irish Women’s Open Stroke Play win in 2015, she handed Spitz the 13th hole after making double bogey. Holpfer was then unlucky to strike the base of the flag with her approach to the 14th as the ball bounced to 15 feet from where she could only manage a half.

In a high quality match, Holpfer refused to give in and secured a seventh birdie between the players at the 15th to level once more. However, bogeys followed at the next two holes to hand two-time Italian Women’s Amateur winner Spitz another notable victory.

'We just had fun'

“The putt on the 1st hole was already important for me, for a birdie to half the hole,” said Spitz. “I holed another on the 2nd to stay all square and then I just kept it going with a few good putts. I felt it was key to get ahead in the first few holes. It has been a good week. I just felt comfortable here with my family and my teammates. We just had fun.”

Earlier in the day, Spitz secured a comfortable semi-final victory over Switzerland’s Yael Berger. Spitz raced into a four-hole lead after five holes as Berger struggled with the windy conditions. Berger claimed the 6 hole, but there was no way back as Spitz closed out a 5&3 win with a birdie on 14th and a conceded eagle putt on the 15th.

Holpfer faced a trickier test against England’s Charlotte Heath in the semi-finals after her two-hole lead after seven holes was pulled back to all square at the turn. She ended the hopes of the English Girls’ Home Internationals winner with a strong back nine, however, and sealed a 4&2 triumph.

Holpfer said of the final defeat, “I missed two short putts on the 13th and the 16th but I’m pretty happy with second and pleased that I made it so far to the final.

“It was a tough match and different playing in a final against someone I know well. It was a great experience to play in front of a good crowd too, as usually at other events you might not have as many people following.

“I’ve done well in Ireland before, winning here in 2015 at the Irish Women’s Open Stroke Play, so it has been nice to have another good week here.”

The 2019 Girls British Open Amateur Championship will be held at Montrose Links.