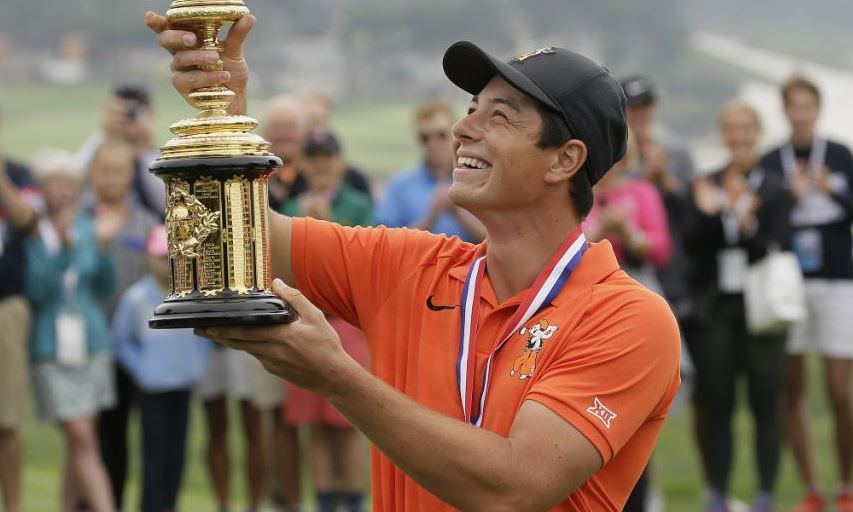 PEBBLE BEACH, California — Viktor Hovland’s week at the U.S. Amateur went so well that even when he made rare mistakes with drives into hazards, it didn’t end up hurting him at all.

Hovland recovered from one to take the lead for good on the fourth hole of the 36-hole final and another to halve the final hole of the morning round and maintain a four-stroke lead.

Hovland rolled from there to become the first Norwegian to win the U.S. Amateur, beating UCLA sophomore Devon Bling 6 and 5 to cap a dominant week at Pebble Beach.

“I’ve had a lot of tournaments before where I hit the ball really well but the few times I missed a green or hit a bad shot I haven’t been able to scramble or make putts,” he said. “This week it kind of all came together which is really cool.”

Hovland trailed after only one hole in six rounds of match play and tied the record for the fewest holes played in a U.S. Amateur since the tournament went to its current format in 1979. Danny Lee also played 104 holes in 2008.

The way Hovland responded to those two errant drives earned him the Havemeyer Trophy with his coach at Oklahoma State, Alan Bratton, serving as his caddie.

The first came when his drive on the par-4 fourth hole landed in a hazard down a steep embankment. Hovland had to climb about 40 feet down a hill to take his shot. He hit a wedge to 3 feet and made birdie, never giving up the lead.

“I had a perfect lie,” he said. “The contact wasn’t the big issue. It was getting the right line and right distance. That was just a hit and hope moment. It ended up pretty sweet.”

He expanded that edge by winning four straight holes beginning at No. 8 and was in control the rest of the way. Bling narrowed the deficit to four holes when Hovland bogeyed the par-3 17th and appeared to have a chance to get even closer when Hovland drove into the rocks at the par-5 18th.

But Hovland saved par after taking a one-stroke penalty and Bling missed his birdie putt after laying up on his second shot to keep Hovland up four holes after the morning round.

“Making that putt felt like a win because I didn’t hit a single good shot in that hole,” Hovland said. “That felt good. It was big.”

Bling then bogeyed the first hole in the afternoon to fall five back. Bling made a long birdie on the 27th hole to get back within four but missed a birdie putt the next hole.

Bling then followed with a double bogey and a three-putt for bogey on the next two holes to fall six holes back with six to go.

Bling, who is from Ridgecrest and about to start his sophomore year at UCLA, lost the match when he missed a long birdie putt on the 31st hole.

Hovland was barely challenged in the match play portion of the event, winning back-to-back matches 7 and 6 in the round of 16 and quarterfinals and never getting pushed to the limit in his six matches. Hovland won 43 of the 104 holes in match play and trailed after only one hole in six rounds.

After making six birdies in his final seven holes in the semifinals, Hovland wasn’t nearly as sharp in the final. He had just six birdies, four bogeys and one double bogey in 31 holes but Bling couldn’t capitalize, missing several mid-range putts that could have changed the momentum of the match.

Norway has little history of success in men’s golf with no one from the country ever winning a PGA Tour event. The most prominent Norwegian player is Suzann Pettersen, who has won two majors among her 15 wins on the LPGA Tour.

This was an emotional week for Bling, whose late mother, Sara, had always wanted to see her son make it at a USGA event. Sara Bling died at age 45 after suffering a sudden blood clot that went to her brain.

Bling had a tough road to the final, getting stretched to the 18th hole in his previous four matches. But after surviving all of those, he couldn’t deliver against Hovland.

“It wasn’t the day I was hoping for but I played really well all week,” Bling said. “I battled really hard to get to this championship match. It’s just the beginning. It’s not the end.”