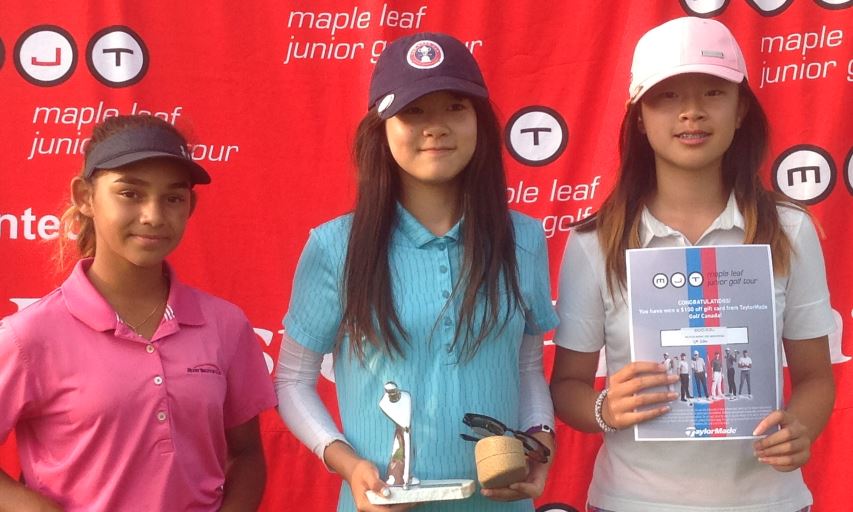 In the MJT Girls 15-18  division, it was Mandy Zeng, 16, of Oakville, ON (76, 79=155) who earned her first victory in three years on the MJT. “The highlight of my tournament was certainly the end of the front nine on day two. I made a great birdie on eight and followed it up with another birdie on nine,” said Zeng. Zeng overcame a one-shot deficit after the opening round to runner-up, Cynthia Ni, 15, of Richmond Hill (75, 85=160).

Low round of the tournament came out of the MJT Peewee Boys division, where 12 year old Andre Zhu of Richmond Hill shot back-to-back 70’s for a two day total of 140, four under-par. Zhu mentioned his enjoyment of playing Eagles Nest; “Eagles Nest is one of the best golf courses in Canada!” Ten strokes back in second place was Eric Zhao, 10, of Toronto (72, 80=150).

In a tightly contested MJT Bantam Boys division, which came down to the final few holes, Ethan Irvine, 14, of Ancaster, ON, took home the Hoselton trophy with scores of 75, 75 (150). “I feel great and I’m very proud of myself for performaing the way I did over the two days,” said Irvine. “My best hole of the tournament was definitely the par three 15th. I stuck a pitching wedge from 132 yards to a couple inches.” This hole ended up being the difference as Irvine would go on to win by three strokes over Ryan Somerville, 14, of Aurora, ON (74, 79=153).

In the most popular division at the tournament, the MJT Juvenile Boys, Cade Preston, 16, of Barrie, ON, was crowned champion. Preston’s rounds of 74, 72 (146) were good enough for a two-shot victory over Krtin Udith, 16, Toronto, who fired a very impressive 69 on the final day for a two-day total of 148. When asked how he felt about his title, Preston said, “Happy. I have had a few rough tournament rounds lately, so it’s nice to get a win and boost my confidence.”

Ian Wilson, 22, of Ottawa, ON (72, 74=146), took home the MJT Collegiate division title by three strokes over Graeme Edwards, 19, of Mississauga, ON (77, 72=149). Wilson, who has been playing MJT events since 2014, says he’s ‘thankful for the opportunity to continue playing competitive golf in the MJT’s Collegiate division.’

Zeng, Oomen-Danckert and Ni were the recipients of invitations to join MJT Team Ontario for the MJT National Team Challenge. Full results and overall event highlights are posted on the MJT website, which also shows winners of the PLYR Long Drive, PLYR Closest-to-the-Pin, MJT Comeback Award as well as the Academy Order of Merit Standings for Ontario.

The next event in the province runs this weekend, August 25 and 26, in Waterloo - the MJT Ford Series at Grey Silo Golf Club. Following that is the MJT-GTA Series at Tangle Creek Golf Club in Thornton over the Labour Day weekend, September 2 and 3. For more information or to register, please visit www.maplejt.com.

About the MJT
The non-profit Maple Leaf Junior Golf Tour presented by Boston Pizza is Canada’s number one-played Junior Golf Tour as well as the only national junior tour run exclusively by PGA of Canada Professionals and the ‘Road to College Golf’ in Canada. The organization is presented nationally by Boston Pizza and supported by valued Premier, Tournament and Product Partners. The MJT hosts more than 70 events across Canada, including free Ford Go Golf Junior Clinics, the MJT Mini Tour for 7-12 year olds, the Collegiate Tour for 19-23 year olds, and multi-day events for competitive players aged 11 to 18, which are also qualifiers for international competitions. The program offers annual awards, scholarships, and frequent player incentives to help reward player's performance and participation throughout each season. MJT alumni include many Professional Tour players and PGA of Canada Professionals, as well as Canadian Amateur, National and Provincial Junior Champions. The MJT aims to develop champions, in golf and in life, promoting the game from grassroots through to provincial, national, university and professional level. For more information on the Maple Leaf Junior Golf Tour, please visit www.maplejt.com.