The Vancouver Open Is Back Where It Belongs 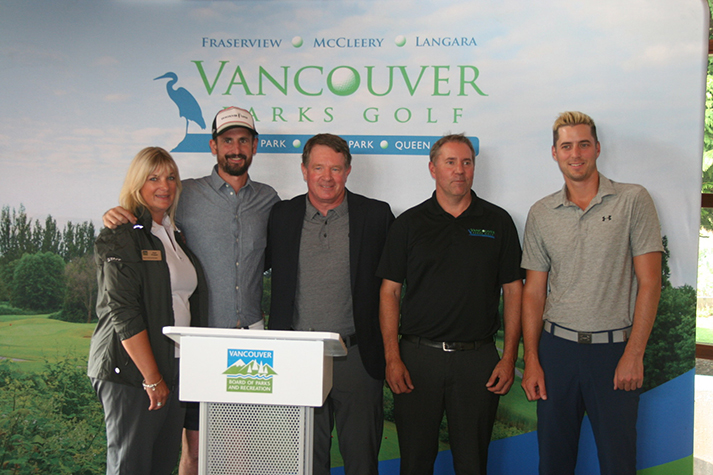 The Vancouver Open is returning home and everyone seems delighted about that.

Vancouver Golf Tour commissioner Fraser Mullholland is pleased to see his flagship tournament return to the three City of Vancouver courses. And the Vancouver Board of Parks and Recreation is also happy to have the tournament back at its Fraserview, Langara and McCleery courses.

“The Vancouver Open should be in Vancouver, right,” says Joan Probert, the park board’s supervisor of commercial operations.

No argument there, but for the last four years the Vancouver Open has not been held in Vancouver. The VGT and park board went their separate ways after the 2013 event, but both sides certainly sounded happy to be partners once again at a media event earlier this week at Langara to promote the tournament.

“This truly is where the Vancouver Open should be run and we are excited to get back to all three properties because they are tremendous golf courses, each in their own special way,” Mulholland said. “And they will pose distinct challenges to the players.”

This year’s Vancouver Open goes Aug. 31-Sept. 2, with a charity pro-am scheduled for Aug. 29. The tournament has always been a big one for Mullholland and his tour. This year’s pro winner will receive $10,000.

The Vancouver Open began back in 2007, with Phil Jonas winning the inaugural event. Abbotsford’s Adam Hadwin, now a PGA TOUR winner, is a three-time winner of the tournament. Langley’s James Allenby will defend the title he won last year when the Vancouver Open was held at Northview Golf & Country Club in Surrey.

From the park board’s perspective, the return of the Vancouver Open is a positive on a number of levels. It helps give the courses exposure and, more importantly, Probert said the tournament fits with city’s efforts to promote the game to a young audience.

“The biggest thing for us obviously is to try and bring new players into the sport,” Probert said. “We know when these young (VGT) players come through the ranks, like Adam Hadwin did, it really motivates the kids to get involved and that is a big deal for us. It is a big deal for us to do anything we can to get the kids interested in coming out and cultivating that younger group of people to come out and play golf.”

Park Board Commissioner Michael Wiebe reiterated the park board’s support for golf and noted that $3-million has been earmarked for drainage improvements to Langara. “Golf is a big part of what we do in Vancouver,” Wiebe said.

“We have three championship courses and an amazing staff who take care of the courses. I think what we want to do in Vancouver is bring golf back. We are trying to help support the First Tee program in Vancouver, and to have the Vancouver Open back after five years is tremendous for us. It helps us showcase our courses, it brings more people to them.”

The First Tee program will be the beneficiary of the Aug. 29 charity pro-am at Fraserview. For Allenby, who has been one of the dominant players on the VGT the past couple of years, the Vancouver Open will be the start of a very busy stretch.

Allenby has status on the PGA Tour Latinoamerica circuit and following the Vancouver Open he will head to South America for events in Brazil, Chile, Peru and Argentina. Sandwiched in between those tournaments is a trip to the first stage of the Web.com Tour qualifying school in Arizona.

“It’s a big event for me leading into the tour that I am on, the PGA Tour Latinoamerica,” Allenby said. “I have got a busy fall. It's going to be pretty hectic, but I am looking forward to it.”

The Vancouver Open is much more than a pro event. The field is limited to just 80 pros but up to 144 amateurs can compete. Based on a full field, the pro purse will be $45,000 while amateurs will compete in handicap flights for $45,000 in prizes and this year’s Vancouver Open will also include women’s and senior divisions.

There is a 36-hole cut. The top 60 per cent of the pros will make the cut, while the top 70 per cent of amateurs will play all three rounds.

CHIP SHOTS: The VGT is looking for volunteers to help with the Vancouver Open. All volunteers receive a hat and one meal a day. A commemorative Vancouver Open golf shirt can be purchased for $40, including tax.

Email This email address is being protected from spambots. You need JavaScript enabled to view it. for more information.