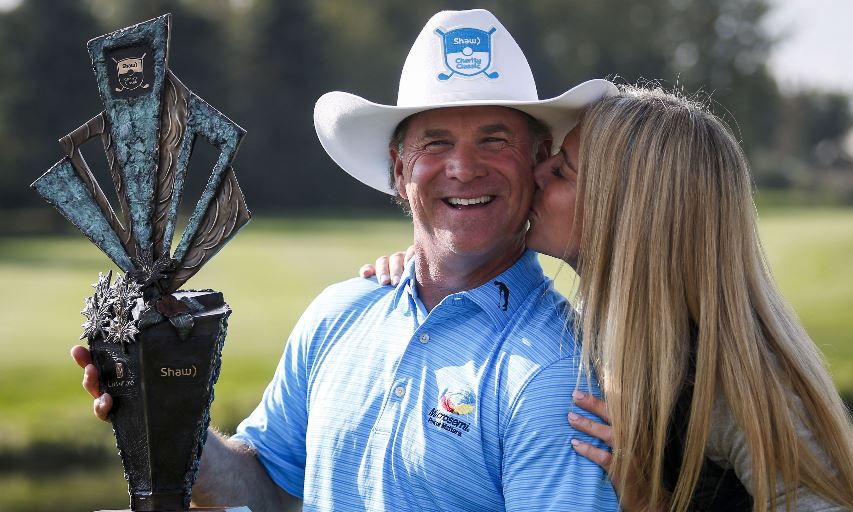 CALGARY, Alberta — Scott McCarron had a one-hop ace on the par-3 14th and closed with a birdie to successfully defend his Shaw Charity Classic title.

McCarron shot a 7-under 63 for a one-stroke victory over Scott Parel, Joe Durant and Kirk Triplett at Canyon Meadows. The 53-year-old McCarron has seven PGA Tour Champions victories, also winning in Madison, Wisconsin, in June, after winning three times on the PGA Tour.

“Playing up in Canada means a lot to me with my mom being Canadian, still a Canadian citizen,” McCarron said. “I first got my start in professional golf on the Canadian Tour. So being up here in Canada really means a lot for me, and to win this tournament twice now is just a dream come true.”

“I didn’t take my time and missed it, lipped it out and made bogey,” Durant said about the 17th. “Just total mental meltdown. And when you do stuff like that, you don’t deserve to win a golf tournament.”

Triplett had a 65. Needing birdie to force a playoff, he parred the 18th after driving short and right and leaving a wedge approach well short.

“Poor tee shot, poor second, and even worse third,” Triplett said. “So, pretty disappointed. I hope Scott remembers Joe and I at Christmastime this year.”

Parel, the Boeing Classic winner last week in Washington, birdied the last for a 62.

“I’ve been in a good place for the last few weeks,” Parel said. “It’s probably felt as good as it ever has. I’m playing very free right now. It seems like every shot I have a plan and I’m executing it. A lot of times there’s indecision. I’m not very indecisive about much of anything, so that’s very key.”

“That’s a really tough hole location on the right-hand side there,” McCarron said. “You have no room for error there right. But (Bernard) Langer got up there and hit right in front of me an 8-iron, a beautiful 8-iron that never left the flag. So it gave me a good visual of the shot that I was trying to hit.

“A lot of times in that situation when I can’t miss it right, I might pull it a little bit over to the safe side, and at that point after I saw his shot, I was like, ‘I’ve just got to take it right at it.’”

“I followed that hole-in-one up with an 8-iron from 163 yards, almost the same type of shot, and I just made a really bad swing, hit it in the bunker and had no shot at all and made bogey,” McCarron said.

On the par-5 18th, he found the left side of the fairway with a long drive and hit a 5-iron approach from 209 yards to 33 feet left of the hole to set up the winning two-putt birdie.

Miguel Angel Jimenez was fifth at 13 under after a 67.