Four Golf Buddies Loving The Game In Their "Golden" Years 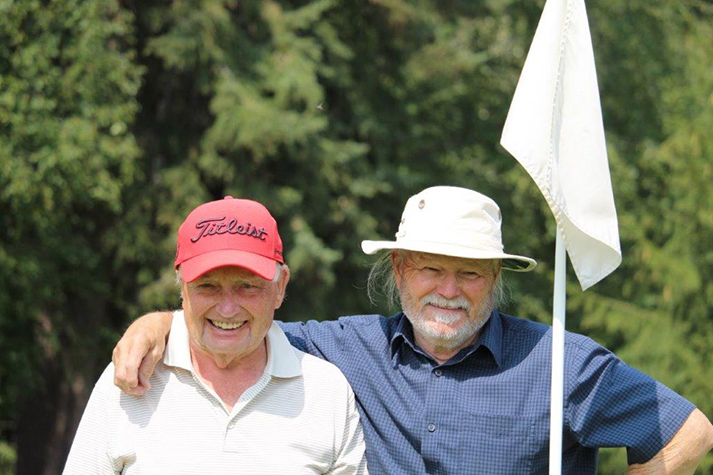 When you hear the saying, "Golf is a game for life" what do you think is meant by it? Well, when you meet people who are living proof of that claim, you begin to understand.

Enter George Ross and Jerry Lawrence. They are half of a regular foursome of members at the beautiful Golden Golf Course in British Columbia.

George is a 93-year-old from Scotland who flew Spitfires and Hellcats for the British Navy at the tender age of 18. He arrived in Golden about fifteen years ago. George got newspapers from Canada, Australia and New Zealand before deciding to come here to stay.

He wanted to see what kind of place this was and thought newspapers would give him a better idea. “We decided that Canada sounded the most interesting. We thought New Zealand sounded a bit boring but very nice and we thought Australia seemed a bit brash.”

As for his attraction to this frustrating game. “You can never defeat it,” he said.

His first swing of the club was at the age of seven at one of the oldest golf courses in the world, the Bruntsfield Golfing Society which was founded in 1761 near Edinburgh where his father was a member in the 1930’s.

Much like hockey is revered in Canada, so golf is in Scotland. So, he came by his addiction honestly. “When I was at school in Scotland, everybody started playing when they were seven or eight. The school taught them.”

Jerry is the youngster of the group at 74 and hails from a community north of Detroit. He crossed over the border to live after being a conscientious objector when drafted to fight in the Vietnam war. After pleading his case (and winning) and becoming a carpenter, he was welcomed with open arms. “They said you’re going to help build Canada,” he said.

He admits he comes from a very privileged family and played plenty of golf at a very posh private course. He’s been in Golden for almost half a century and even helped pick rocks out of the fairways as the golf course was being developed.

He loves the community and the game of golf. “The social connections here were so much more human than what I grew up with, I just fell in love with the course, the people, the whole society. It’s just been fun,” he said. “I did take a little hiatus from golf because I became a 'golfaholic' to the sacrifice of my jobs and income, so I had to cut the strings. After a while I learned how to do both.”

Two other members who are in their 80’s, Roy Nixon and Gord Dakin make up this varied foursome and they tee it up almost every Tuesday and Thursday at Golden. It’s not always a golf cart for this bunch either. George is still pretty good at hiking around the course with his golf buddies. “I always walk the first nine and then in the cold, cooler weather I walk the 18,” he said.

Having grown up in Scotland, he quickly became used to playing in the brisk, mountain air of Golden. “I remember in Scotland on a cold day some people carried a whiskey flask”, he said with a hint of a smile.

This group has been together for about five years now and there is certainly a familiarity amongst them and the other members of the golf club. “We’re all acquaintances and friends and having four of us on the course at the same time, playing together, I mean, we’re virtually indestructible,” laughed Jerry. “Nobody messes with us old farts. We are the oldest people on this course.” 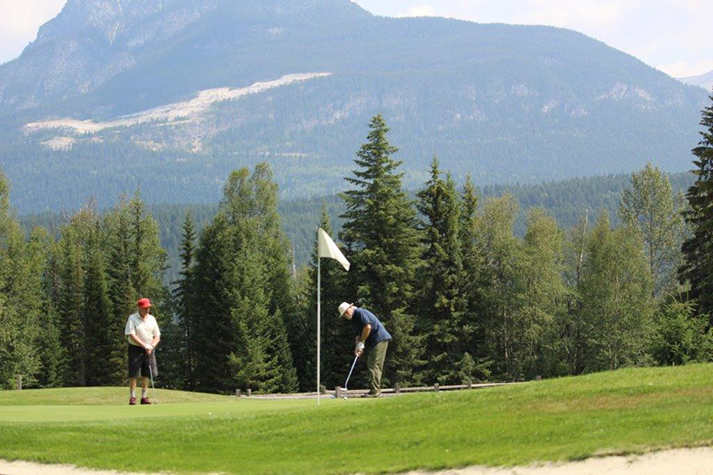 The staff at Golden honour that relationship. When these boys show up to play their round, their clubs are already on a pull cart or a motorized cart if that is how they are getting around that day. It’s about respect.

Like any regular foursome there are differing opinions around a variety of subjects which get discussed over 18 holes, including the topic of friendly competition. “Any given day any one of us can win, score better or play better. We just all get along very well,” said Jerry.

George has a slightly different take on the matter. “There is a touch of competitiveness with Jerry and Gord, and Roy and I play about the same,” he said. “But I always beat him (Gord),” Jerry quickly added.

It’s not so simple to describe the dynamics of such a foursome, but you get the feeling George is the leader of the pack. “I’m not sure about that. I book the tee times,” he said. “They are very considerate. They put up with my poor golf. It’s enough of a burden to place on them” Jerry does confirm the status of George being the straw that stirs this drink. “When George calls and says we’re playing today we say, yes sir. I keep telling George when I grow up I want to be like him.”

I asked the two men to describe the two absent members of the gang and they told me Gordon is a saint, into gardening, plays a good game of golf, and has a good demeanour. Roy is very quiet but does have plenty of stories to tell. They both declined to give any more information about those stories. What happens on the course, stays on the course it seems. “I can still remember the stories. These guys are still making them and trying to remember,” said Jerry.

He describes George as a real gentleman and feels he is more of a father figure to him than his own father. George’s take on Jerry is that he is a very interesting man.
“I think he rebelled against his family. I could be wrong about that, but I get that impression,” he said. “He has ploughed his own furrow and stills ploughs it.”

It’s a statement which could easily be applied to them all. As George and Jerry tell it, each member of the foursome apparently does things which maybe the other members simply just roll their eyes at, says Jerry. “But we are such a harmonious group it’s worth the sacrifice to keep your mouth shut.”

George did use his elder statesman status once to put his foot down over a certain issue which the others paid heed to. “Some of the group members swear a lot and I actually spoke to them about that language wasn’t really acceptable on the course and no one swears now”, he said.

But Jerry begged to differ. “Wait a minute, wait a minute. Time out. I heard an F-bomb from old, you know who today,” he pointed out. “One in five years,” countered George. There was no further discussion on the matter, just some laughter.

While playing as a group is a given, a couple of days during the week George says he does get out on his own, but he does prefer being with the group. “It’s much better but it is a game where you don’t necessarily need company, but I think company is part of the enjoyment of the game.”

Jerry leans towards the group when it comes to alone versus part of the gang. “I appreciate the camaraderie, the connection. To tell you the truth, I won’t come out and play alone,” he said.

So, five years with the same bunch requires some cooperation at some level when it comes to dealing with not only different personalities but varying levels of golf skill. It sheds more light on the game for life claim. “The game of golf is the glue between us. We’re all trying to achieve the same thing,” said Jerry. “We try to be tolerant of everybody’s ability.”

Now, I had to ask about those days of flying planes in the war - is there some deep life-lesson learned and did George apply it to the game of golf? His answer didn’t really surprise me after talking with him that day. “Well it didn’t teach me much about golf. I don’t think it ever taught me anything really,” said George.

So, I changed direction and asked if there was any similarity regarding the tension level of flying war planes to what one might feel trying to squeeze a drive into a narrow fairway? I mean we all feel some nervousness over a shot every now and then.

George’s answer was simple. “It was easier than golf”. Jerry’s take on the matter was different of course. “Narrow par fours don’t shoot back,” he said.

Words to live by the next time you tee it up with your buddies.Hopefully you have a better idea about what “Golf is a game for life,” means.

Jim Claggett is a freelance writer based in Red Deer, Alberta and has been a contributor to Inside Golf since the 1990’s. He is now retired after 39 years working in radio, television and newspapers.

He can be reached at ​This email address is being protected from spambots. You need JavaScript enabled to view it.