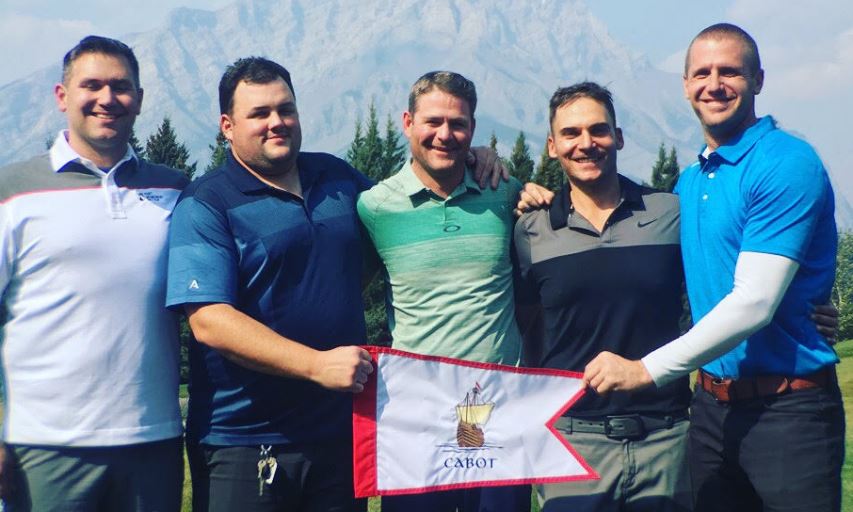 BANFF, Alberta — While it wasn’t as large an endeavour as an army manoeuvre, Operation Send The Boys Home certainly did take some planning and strategizing. And in the end, it all worked out.

This battle plan was all part of a bigger game, played out on the famed Fairmont Banff Springs Golf Course, in order to send a team of four players, and their pro, off to Cape Breton Island for the championship rounds of the RBC PGA of Canada Scramble. As it turned out, three of the players on one of the teams advancing to the finals at the famed Cabot Links and Cabot Cliffs in Nova Scotia are actually from there, but now work in Fort McMurray, Alberta.

So the mission was launched to return them home, even if just for a brief spell.

Led by their pro, Blaine Kruger of the Stony Plain Golf Course, the foursome of Ryan Carty, Andrew Lawrence, and Danny Shaw, all natives of the East Coast province, and teammate Jeremy Fresz, from Alberta, combined to record a score of minus-16 and claim a spot in the national finals by .2 of a stroke after handicap factors were taken into account. What made the advancement even better for the group was the fact they had never even met until teeing it up for the first time in Banff at the Regional final.

This journey began for the four amateurs when they earned their way into the Regional playoff after capturing a qualifier event in Stony Plain with a net score of minus-19.2 (52.8) and a 4.3 stroke win. Because they needed a pro for the Regional, Kruger was added into the mix for the event in Banff. There, the team placed third overall with a net score of minus-20.8 (gross score of minus-14 and a handicap number of 6.8), only .3 of a stroke clear of the fourth place team but good enough to advance to Cape Breton’s famed layouts.

As for the rules governing this event, they’re pretty much like any other Scramble tournament with one notable exception: “You have to use three drives from each player and whoever’s drive you took, they could not hit the second shot and the same thing if the second shot didn’t hit the green,” Kruger explained about how one big hitter couldn’t carry their team to a win on his own. “The only way to hit two shots in a row is when you’re putting. All five players always putt.”

In Banff, the foursome met their pro for the first time at the course and the connection between everyone was instantaneous, said Kruger.

“It was cool because I didn’t know these guys. We didn’t know each other but we had a good chemistry. Right from the start we had a good time. They were really focused. I was really impressed; they weren't there fooling around. They had their strategy down pat of what they wanted to do.”

Given the number of teams, 30, at the Alberta final, the group teed off on the second hole at Banff Springs. As they came down the home stretch, they faced a dilemma on the par-5 18th hole and then the first, their last hole of the day.

“We still had to use one of Jeremy’s drives, the higher handicap on the team, with two holes left. On 18, if we took his drive we had 285 left and if we took mine or Ryan’s drive, we had 214 left. We said, ‘What do you think we should do? Ryan said, ‘The hell with it boys. Let’s go for the eagle and I’ll make sure I get it in play on the first (or last in this case) hole.’ And he did.”

That drive came after the team eagled the 18th, thanks to a 20-foot putt from the fringe by Fresz that rolled in. Carty then stepped up and striped the drive he needed on the final hole, and the team birdied that to earn their way into the national final.

Now that they are indeed headed home, the former saying of getting the trio home has been taken care of. “That was pretty much the main thing,” related Kruger. “We’ll want to win in Cape Breton, of course, but the big deal was to get those guys home,” which they accomplished.

The national final runs October 11 - 13 on the Links and Cliffs courses. Two other teams from Alberta advanced, one from Collicutt Siding headed up by pro Riley Fleming and the other from Whitecourt, who were represented at the final last year.