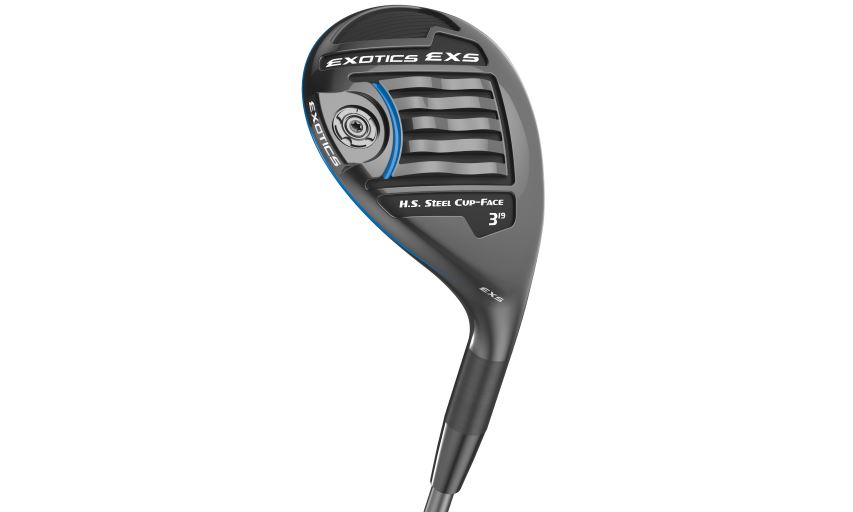 Tour Edge officially introduces the Exotics EXS hybrid, featuring a myriad of game-enhancing innovations that has led Tour Edge to market the EXS line with the tagline Pound for Pound, Nothing Else Comes Close.

The loaded-with-technology hybrids incorporates a Flight Tuning System (FTS) that features an interchangeable sole weight, Cup Face Technology with Variable Face Thickness (VFT Technology) for an expanded sweet spot and a new and improved SlipStream™ Sole for faster clubhead speed through the turf.

The new ultra-premium, high-performance hybrids will be available worldwide on November 1, 2018.

“We’ve really been able to perfect the hybrid over the past couple of seasons,” said Tour Edge President and Master Club Designer David Glod. “I think one of the main reasons some people went away from replacing their long irons with a traditional hybrid was because they were just experiencing too much spin into the wind. With the EXS hybrid, we have a club that sets up beautifully that is going to be our longest distance hybrid for players below 105 MPH swing speed due to a slightly forward CG that produces less spin and due to this tour-preferred, genuine Tensei CK Blue 2G shaft. This is the ultimate in long iron replacement for the majority of golfers.”

The more compact design of the EXS hybrid head features premium exotic metals; a Japanese HT980 steel cup face. The hyper-strength strength steel is quench-hardened, a special heating technique that takes 750 degrees to provide an extreme amount of strength while allowing for a thinner face. This cup face design allowed for Tour Edge to make the face thinner than in any previous model for a greater energy transfer. The high-performance hexagonal Variable Face Thickness (VFT) offers multiple levels of thickness that maximize forgiveness from more points on the face, especially in the heel and toe areas.

The CG location of the EXS is positioned closer to the face for less spin, creating a trajectory that fights wind and increases roll. The aerodynamics in the EXS hybrid are greatly enhanced by new and improved wider SlipStream speed channels on the sole that create a faster clubhead speed through smoother turf interaction.

The 4-gram sole weight can be adjusted to another weight to increase swing weight in the club and to further reduce spin. Additional weight screws can be purchased as an EXS hybrid weight kit that includes 7-gram and 10-gram weights.

Exotics by Tour Edge hybrids became the fastest growing hybrid on the U.S. professional tours in 2018 and were in the bag for four victories on the PGA Tour Champions. Exotics staff players Bart Bryant, Tom Lehman and Scott McCarron all won with an Exotics hybrid in the bag in 2018. Over 250 Exotics clubs were put into play on the PGA Tours in 2018, according to the Darrell Survey.

An ultra-premium Tensei CK Blue 2G shaft series by Mitsubishi Chemical is the chosen stock shaft for the EXS hybrid.  Extremely light yet extremely stable throughout, the Tensei Blue CK features advanced materials like Carbon Fiber and Kevlar mixed with other lightweight materials that weigh in the 60-80 gram range depending on flex. A 60-gram weight will be available in Ladies and A-flex, a 70-gram shaft available in Regular flex and an 80-gram shaft available in Stiff and X-flex.

The suggested retail price for the Exotics EXS hybrid is $199.99.

Every Tour Edge club comes with a lifetime warranty and a 30-day play guarantee. For more information, call (800) 515-3343 or visit touredge.com.