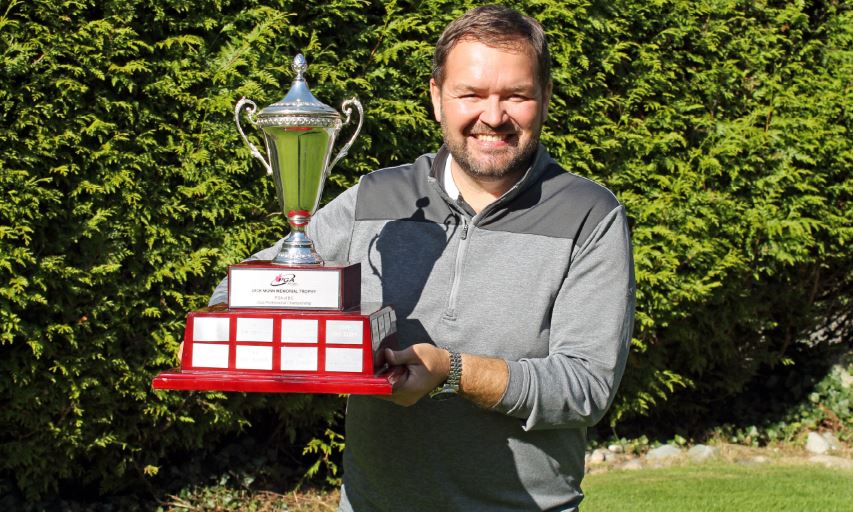 VANCOUVER, British Columbia — Lindsay Bernakevitch’s large overnight lead came in handy at University Golf Club as he managed to hold off the rest of the field to win this year’s Srixon / Cleveland Golf / XXIO PGA of BC Club Professional Championship presented by Oakcreek Golf & Turf.

Bernakevitch, the Head Professional at Victoria Golf Club, carded a 1-under-par final round of 71 to follow up Monday’s 66, claiming his second title in the event by two strokes at 7-under.

Point Grey Golf & Country Club Head Professional Dave Zibrik posted a 5-under 67 to challenge Bernakevitch over the final 18 holes but settled for second place, while Matthew Palsenbarg (Northview Golf Academy) earned his third consecutive top-three finish at a Club Professional Championship at 3-under.

The Club Professional Championship is a 36-hole stroke-play event that is open to all Head, Executive and Head Teaching Professionals who are members of the PGA of BC.

“Honestly, it feels really good,” Bernakevitch said of capturing the victory. “I played with some nerves early on in my round and it’s been so long since I’ve been in contention in a tournament. I haven’t played a lot this summer and the tournaments I have played, I haven’t played very well.

“In the end, I got a couple of putts to drop late and pulled it out.”

The 38-year-old saw much of his four-stroke cushion evaporate early on after bogeys at two of the first three holes, while Zibrik and defending champion Philip Jonas (Philip Jonas Golf Academy) put up some early birdies to close the gap. But with a run of three birdies in a row that started on the par-5 14th hole, Bernakevitch gave himself plenty of breathing room to secure the title.

“As I got more into the round I settled down a little bit, and was able to stroke the putter a little more freely, roll the ball with some better speed and I got three in a row to drop there,” said Bernakevitch, who took home $2,650 for the win and will have his name etched on the Dick Munn Memorial Trophy once more.

Coupled with his win in 2015, Bernakevitch became just the third player to win the Club Professional Championship multiple times. It’s an event that holds special significance for him beyond his pair of victories.

“It’s just a fun way to end our year. You get together at the end of a really busy season and see your friends, your colleagues in the industry,” he said. “I think that camaraderie of the tournament is probably my favourite part about it.

“We have some amazing players in our Association, and to be able to come and test your game against them is always a highlight.”

Zibrik, himself a past champion of the tournament in 2016, made seven birdies during his round Tuesday and briefly held a share of the lead on the back nine before Bernakevitch pulled away. The 34-year-old knew he’d need to put together an impressive round Tuesday for a chance at the trophy but came up just short.

“I figured 65 starting the day, and that would have got me into a playoff,” said Zibrik. “Lindsay’s a good player and I knew I’d need to post something pretty good to frighten him a bit.

“It was nice to show up and play at least one really good day of golf – yesterday was a bit scrappy,” he added of his first-round 72. “I hit it close a bunch today so I had some looks, and I chipped in once. I played the par-5s a lot better, and that was the main thing.”

University Golf Club, which was hosting a PGA of BC individual stroke-play championship for the first time in the Association’s modern era, proved to be an excellent venue for this year’s tournament, with the course holding up well despite wet conditions over the past few weeks.