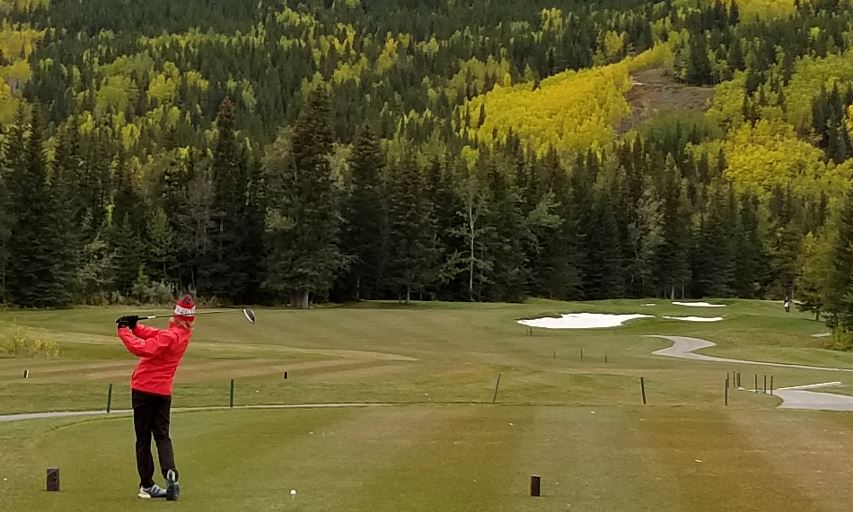 KANANASKIS VILLAGE, Alberta — The snow stayed away making for breathtakingly beautiful vistas at the newly renovated Kananaskis Country Golf Course in Kananaskis, AB, this past weekend, where freezing cold did not deter a diehard field of junior golfers on the Maple Leaf Junior Golf Tour (MJT). The brave players ended up being treated to 36 holes of stunning golf on the Mt. Kidd and Mt. Lorette layouts in the final MJT tour event in the province for 2018.

Cooper Lindberg, 15, of Calgary, AB, won the MJT Juvenile Boys title after shooting a very impressive one-under par 71 to open the tournament. Lindberg followed that with a 79 to finish at 150 for the two-days. Graedon Woodward, 15, of Cardston, AB, finished in second place at 154 (75, 79) for the tournament, four shots behind Lindberg. When asked about his win Lindberg responded, “I feel awesome – there are very good golfers in the 15, 16 division - and I’m very happy as I haven’t won in a while.  It’s a huge relief.”

The MJT Bantam Boys title went to 13-year-old Jaiden Koonar of Calgary after he fired a remarkable two-day total of 148 (76, 72) from the ‘white tees’ to lead all competitors at the event. Koonar, who was the only player in his division to shoot in the 70’s each day, said afterwards, “My best hole of the tournament was number 10 of Lorette. I hit my drive next to a tree and then hit my second shot over the trees and it ended up behind the green. I then chipped in for birdie. My goal this year was to win one tournament – I worked really hard for this event and all the practicing paid off.” Runner-up in the division was Bradin Stahl, 14, of Priddis who shot 84, 81 (165).

The MJT Peewee Boys division was shortened to 27 holes due to the cold, with nine holes on Mt. Kidd and 18 holes on Mt. Lorette. Jayden Brar, 11, of Calgary took home the winner’s Hoselton trophy with a two-day total of 113 (38-75), and stated afterwards that ‘it feels great.’ He kindly added, “This is the best junior golf tour in Canada.” Runner-up in the division was Peyton Stahl, 11, of Priddis, AB, who carded 44, 90 (134).

Abigail Hartzler, 17, of Carstairs, AB (90-86=176) and Emily Cornwall, 15, of Calgary (94-82=176) tied for the lead in the MJT 15-18 Girls division, forcing a playoff in which Hartzler triumphed. ”My best hole was number one as I had a good start and then a good playoff finish!” she said. “Conditions weren’t favourable and the course was challenging, but it was a great tournament to end my season on, at a beautiful course.”

The MJT Girls U15 competition was shortened to 27 holes and the title went to 13-year-old Georgia Barr of Calgary, who finished with 85, after posting a nine-hole score of 46 to open the tournament. Barr won by five shots over runner-up, Brooke Frerichs, also 13, of Calgary, who shot 47-89 (136). “I thought the first hole was my best because of the way I came back after being in the water, then trees, over the green and then chip in for bogey,” Barr said afterwards. “I feel very proud of myself for winning this tournament given the horribly cold weather.”

Full results and overall event highlights are posted on the MJT website, which show winners of the PLYR Long Drive, PLYR Closest-to-the-Pin and MJT Comeback awards, and the final Alberta Academy Order of Merit standings.

That marks the end of the regular season schedule for the MJT in Alberta. Qualified players are now preparing for the prestigious MJT Boston Pizza National Championship presented by TaylorMade Golf and adidas at The Legacy Golf Club in Phoenix, AZ, November 8 to 11, and early bird memberships for 2019 will be available in December.  For more information, please visit www.maplejt.com.

About the MJT
The non-profit Maple Leaf Junior Golf Tour presented by Boston Pizza is Canada’s number one-played Junior Golf Tour as well as the only national junior tour run exclusively by PGA of Canada Professionals and the ‘Road to College Golf’ in Canada. The organization is presented nationally by Boston Pizza and supported by valued Premier, Tournament and Product Partners. The MJT hosts more than 70 events across Canada, including free Ford Go Golf Junior Clinics, the MJT Mini Tour for 7-12 year olds, the Collegiate Tour for 19-23 year olds, and multi-day events for competitive players aged 11 to 18 which are also qualifiers for international competitions. The program offers annual awards, scholarships, and frequent player incentives to help reward player's performance and participation throughout each season. MJT alumni include many Professional Tour players and PGA of Canada Professionals, as well as Canadian Amateur, National and Provincial Junior Champions. The MJT aims to develop champions, in golf and in life, promoting the game from grassroots through to provincial, national, university and professional level. For more information on the Maple Leaf Junior Golf Tour, please visit www.maplejt.com.