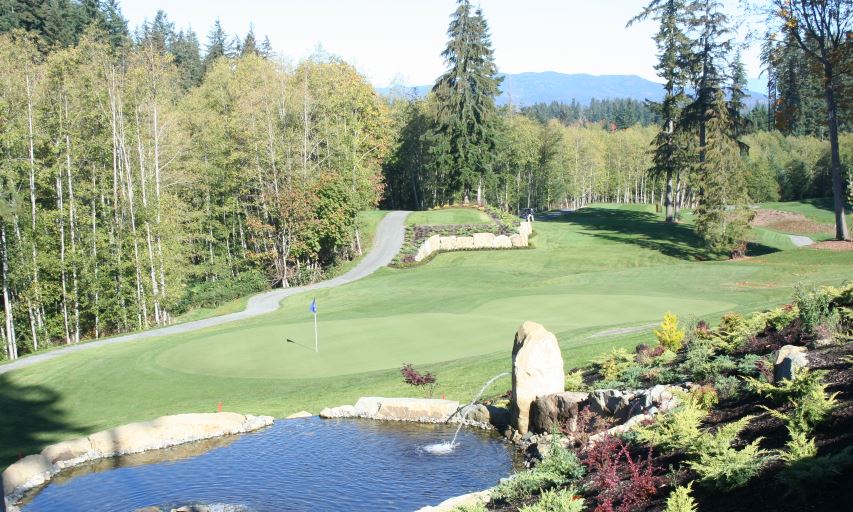 CAMPBELL RIVER, British Columbia — If the folks at Guinness World Records had a category for fastest construction of a golf course, the newest addition to the Vancouver Island Golf Trail would certainly be a contender.

Campbell River Golf & Country Club, which opened in early August, came to life in about 17 months. Apparently no corners were cut because the course turned out beautifully.

The par-70 layout, which features perfect bent-grass greens and impeccable rye-grass fairways, was designed by Graham Cooke on what was the site of the former Sequoia Springs Golf Course.

It should help put Campbell River, which is also home to highly regarded Storey Creek Golf Club, on the radar as a golf destination. Who knows, maybe bagging some birdies will become almost as big as reeling in a 30-pound chinook in the city that bills itself as the ‘Salmon Capital of the World.’

Campbell River G&CC was built and is owned by the Mainland family, who closed on the property on March 1, 2017. The family runs a highly successful Campbell River-based business, Seymour Pacific Developments, which builds and manages multi-family residential properties in Western Canada.

They have moved a little dirt in their days and put that expertise to work in fast-tracking Campbell River G&CC. 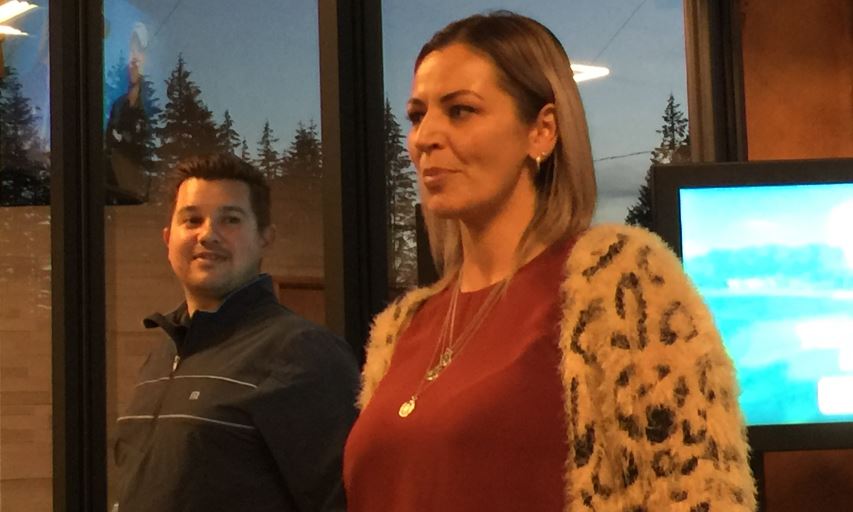 Campbell River G&CC General Manager Amanda Raleigh Is Very Excited About The Next Phase For Her Newly Opened Club. (BC Golf/Bryan Outram)

“It was an interesting process,” says general manager Amanda Raleigh. “We did things in a very short period of time that no one else in the golf industry had ever seen. “We get to look at things through a different lens. Yes, there are ways things have always been done in the golf industry, but just because that is the way things have always been done doesn’t mean that was the way we were going to do it.

"What we do very well is move dirt and get things done in a quick fashion. And that is what you get to experience today. A beautiful golf course that so many in the industry said we wouldn’t be able to accomplish in the time that we did.”

Leading the charge was course superintendent Greg Austin, who has lots of experience building golf courses throughout British Columbia. “It was unlike any project I have ever worked on before,” Austin says. 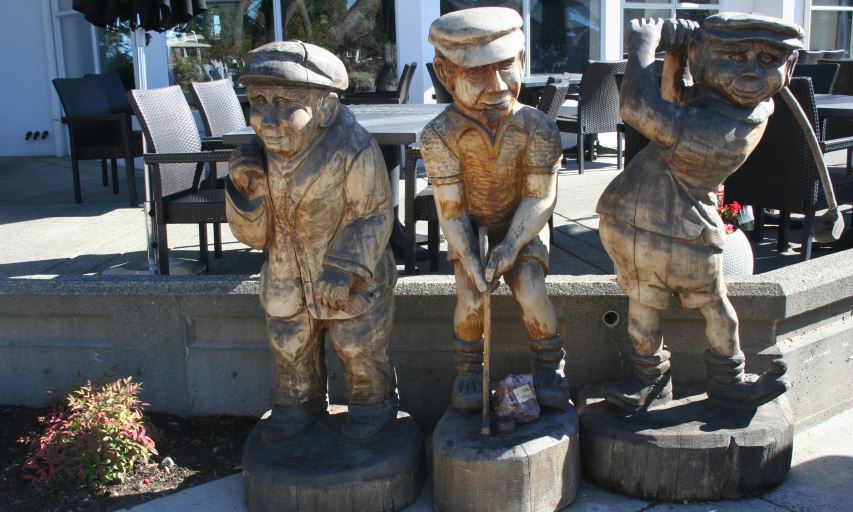 These Three Happy Fellows Greet You Upon Your Entrance To The Campbell River G&CC. (BC Golf/Bryan Outram)

“It was a different approach where our timeline was the primary goal. I had to look at all of the challenges we had in a different perspective. A typical golf course is designed and planned for a year or two before you actually implement the plan. There was no real plan for that.”

Austin says the course owners deserve much of the credit for allowing he and his crew to get it done so quickly. “I leaned a lot on ownership,” he says. “They relied on me for my golf course expertise in construction and I relied on them to remove the barriers and provide the resources and they did that.

"They gave me the tools to do the job and there was nothing that was going to prevent that from happening. From my perspective it was a dream project. It was awesome.” 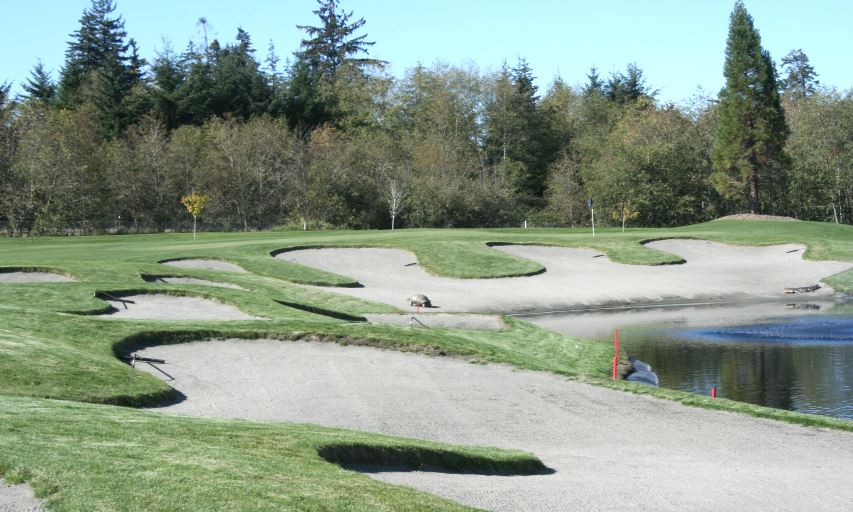 The Par 5 15th Hole Presents A Formidable Challenge - But No, That Isn't A Real Alligator In The Bunker On The Right. (BC Golf/Bryan Outram)

The course is not long, measuring just 6,141 yards from the tips. Four other tees measure from between 4,399 and 5,675 yards. It’s an atypical layout in that it includes seven par 3s, six par 4s and five par 5s. Five of the first 10 holes you play at Campbell River are par 3s, so your iron game needs to be sharp.

The course has an interesting finish, which includes three par 5s and two par 3s on its final five holes. The 613-yard par 5 17th hole is a particular brute. The course is walkable and there are hazards on 16 of its 18 holes. It is a lot of fun to play.

Course conditions are clearly a priority for the owners. During the off-season, Campbell River is only open on Thursdays, Fridays, Saturdays and Sundays. And even in peak season next year, it will remain closed on Mondays for maintenance.

Peak-season green fees have been set at $99 for visitors and $85 for Campbell River residents, Juniors pay #35. A $59 rate is available for play after 1 p.m. Shoulder-season rates are $55 per person with Juniors paying $25 for 18 holes. Complete information on rates, including family packages can be found at crgolf.ca.

She notes that no expense was spared building the course, including what may be the nicest washrooms you’ll ever encounter on a golf course. “I am sure when you played some other courses this week when you had to use a washroom, you used a porta-potty,” Raleigh says with a smile. 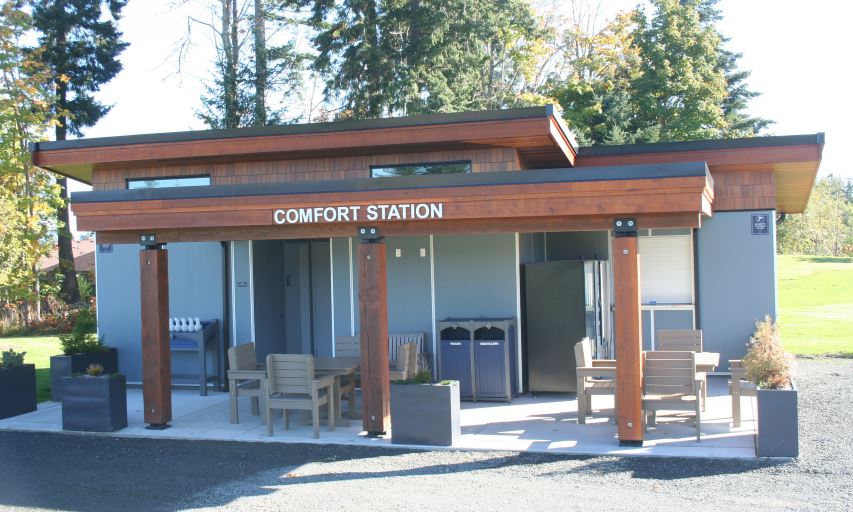 “You didn’t go into a bathroom that had a quartz countertop and automatic sinks. Those are the little things that we pride ourselves in. We also have brand new GPS carts. We really want to be the next level and we really want to offer services that are above and beyond.”

The first and 18th holes at Campbell River run beside a driving range, which is very much one of the focal points of the development. Called the Velocity Lounge & Driving Range, it is the second range in Canada to offer Toptracer technology. The lounge has eight bays, each equipped with comfortable sofas and TV monitors to track your shots. 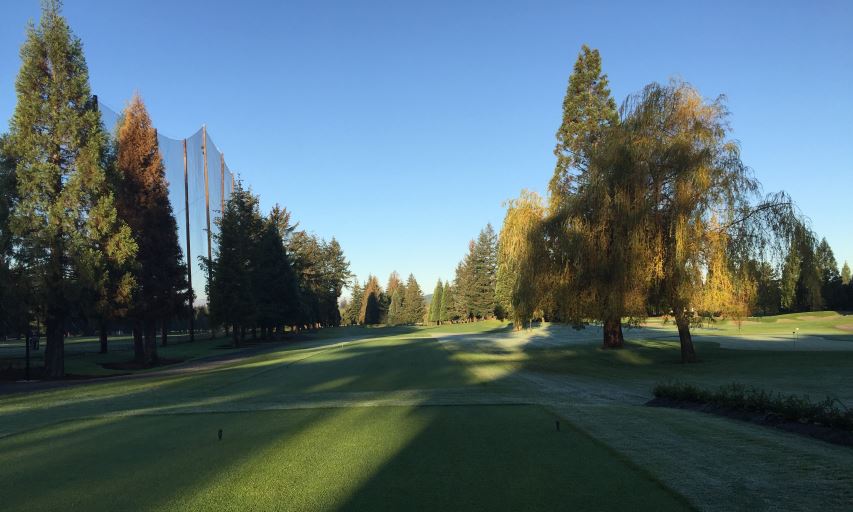 The First Hole At Campbell River G&CC Runs Alongside It's State Of The Art Toptracer© Equipped Driving Range. (BC Golf/Bryan Outram)

Visitors can load the Troptracer app to their phones and play a variety of games. Feel like playing the 18th hole at Pebble Beach? Or maybe a long drive contest with your buddies? You can do that and a lot more while ordering drinks from the bar and a selection of great food menu items. Each bay seats eight people and rents for $60 an hour or $100 for two hours.

"You are not going to find anything like this anywhere else on the North Island. And by having people come out and experience the Toptracer experience, we will probably get some of them into golf.” 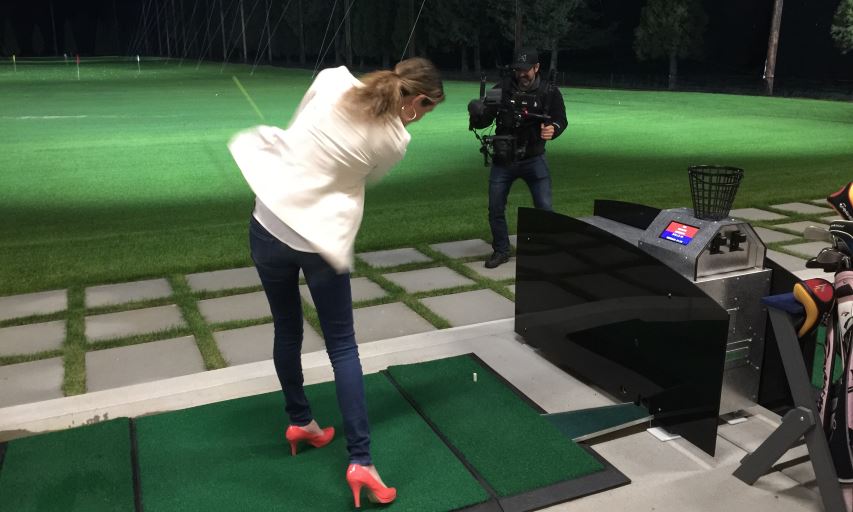 The Volocity/Toptracer© Range Is Set Up For Serious And/Or Social Participation. (BC Golf/Bryan Outram)

Raleigh, who is the daughter of Seymour Pacific Developments founder Kris Mainland, says the family is only getting started. It plans to turn the property into much more than just a golf course. Plans call for a 100-room hotel, a conference centre capable of handling 300 guests, a spa, swimming pool and a new clubhouse featuring a restaurant and lounge. Work on all of that is scheduled to begin next fall.

“We are super excited about the next phase of this project,” Raleigh says. “Next September we are going to tear down that clubhouse and we are going to turn it into a destination golf resort.”

Raleigh hopes golfers will use the resort as their base to explore the many outdoor activities Campbell River has to offer. That includes golfing at the area’s two other courses, Storey Creek Golf Club and Quadra Island Golf Club, a nine-hole layout that is just 10 minutes away by ferry. Crown Isle Golf Resort is just 45 minutes away in Courtenay and could easily be added to a Campbell River stay-and-play package.

“We would happily escort them to Crown Isle where they would golf and come back stay with us. We could also accommodate their fishing packages and if they want to take a helicopter tour to go see the glaciers and if they wanted to go and golf at Quadra we would drive them to the ferry and drop them off. We want to be that hub where they come and stay with us. They not only golf our course but we are that facet where we give them the opportunity to explore all of the amazing things that we have on the North Island.”

Over at Storey Creek, the Les Furber design that next year will celebrate its 30th anniversary, head professional Steven MacPherson doesn’t quite know what the new Campbell River course will mean for business at his facility. 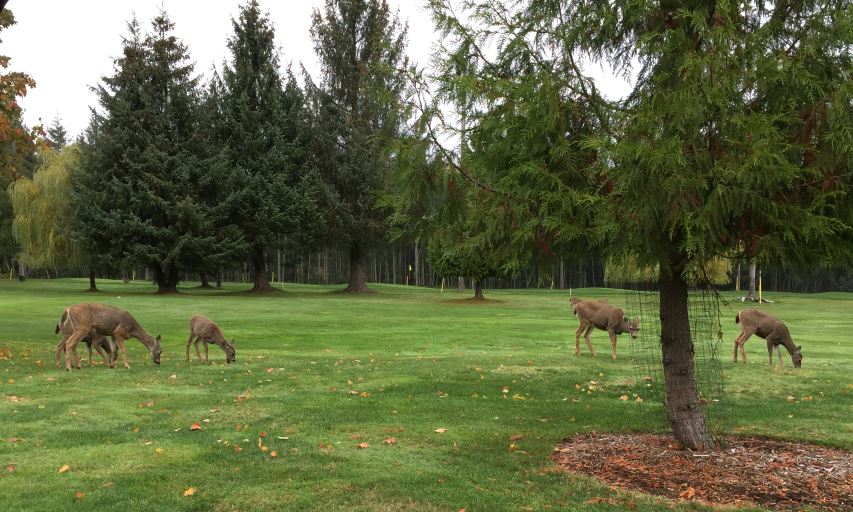 Like Much Of Vancouver Island, Storey Creek Golf Club Is Home To Many Types Of Wildlife, Especially Deer. (BC Golf/Bryan Outram)

Storey’s Creek’s rounds increased over the last year or so when Sequoia Springs was closed and construction started on the Campbell River course. He and others wonder if there is enough local traffic in the city of about 35,000 residents to keep two high-caliber courses running.

The answer to that question is probably only if the area begins to draw more tourist play. “Business has been great, but Campbell River has been under construction for the last 18 months, so we are not truly sure how good our numbers will be until they are fully open and we’ll watch the traffic at that point,” MacPherson says.

“We are certainly concerned that maybe some of the local traffic will be shared. But hopefully we will see a lot more tourists golfing and we’re hoping it will give people one more reason to stay here to fish and whale watch and golf two great courses.”

Kirsten Soder, executive director of Destination Campbell River, has no such concerns. She is certain that all the plans for Campbell River G&CC are positives for the community. “I think it is a game-changer just because it proves that when it comes to the sophistication of the destination we are stepping up our game,” Soder says.

“And I think as this facility expands with a hotel, spa and conference centre it will continue to grow not just tourism but the quality of life here for residents. It’s nice to see that local families are investing in recreation and leisure here. It does better with the quality of life for everyone. That’s exciting.”