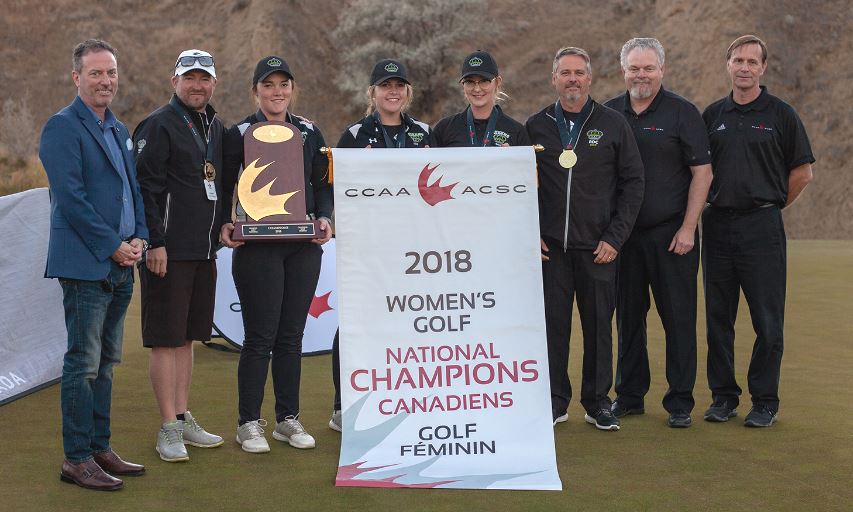 “To take home gold at a national championship is incredible, not only for RDC but for Alberta golf,” says Scott Bergdahl, head coach for RDC Queens. “We have put a lot of resources into developing both the men and ladies teams in the last few years. So to be rewarded like this, in such a short period of time, is really outstanding. I think it’s really going to benefit the team and the program moving forward.”

On the men’s side the 2019 CCAA Golf National Championship Hosts, Cégep André-Laurendeau, secured a nine-stroke victory to raise a championship banner.

“Winning a national award and being able to say we have a national title for John Abbott is amazing. I think I played really well and I’m really satisfied with my overall week,” says Romancew.

The women’s team event was dominated by the ACAC.

On the men’s side, the Boomerang d’André-Laurendeau had a dominating performance on their way to a national title. Their four-day total of 1138 was 14 under par and placed them nine strokes ahead of silver medalists Humber College who had a four-day total of 1147. The bronze medal went to the University of Fraser Valley (UFV) Cascades who tied with Champlain St. Lawrence but won the bronze on a count back. Both teams closed with four-day scores of 1171.

Romancew, led the women’s individual race from wire to wire. Her final total of 298 left her six strokes ahead of runner-up Shaye Leidenius from RDC. Alyssa Stoddart from the Fanshawe Falcons shot a four-day total of 305 to claim the bronze medal.

In men’s individual action, Laurent Desmarchais from André-Laurendeau shot an amazing 13 under par over four days to win gold. Cobber Watt had a solid week and earned the silver medal with a total eight under par 280. Desmarchais’ teammate Olivier Ménard took home the bronze with a four-day score of seven under par 281.

Tournament all-stars were also awarded. Winners for the women included Romancew, Leidenius and Stoddart. The men were represented by: Desmarchais, Menard and Philip Isabelle from Cégep André-Laurendeau, along with Watt from Humber College and Daniel Campbell from UFV.

Exemplary leadership awards, given out to the athletes who uphold the highest integrity of the game, and who show leadership and fair play both on and off the course, were given to Nicole Schultz of the Rattlers and Brad Byers from the Fanshawe Falcons.

On the last day of competition, the male athlete of the day was Kyle Claggett from the Cascades. Clagget was personable and polite throughout the week and always had a smile on his face.

The female athlete of the day was Stoddart. She was a strong competitor all week and her third round 69 was the tournament low on the ladies side. She was always friendly and supported her teammates and the other golfers throughout the week.

Our final team of the day was awarded to the UBC Okanagan Heat for their friendly and positive attitude. They battled hard each day and were rewarded with a bronze medal.