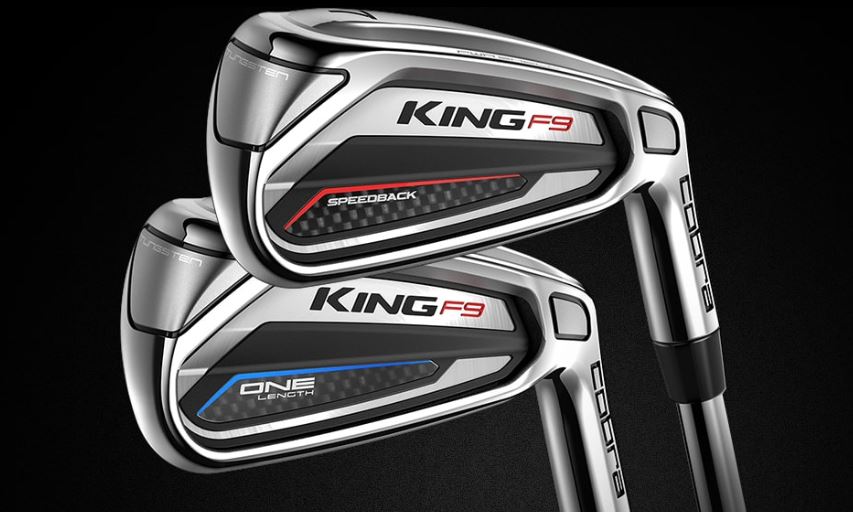 COBRA Golf, a leader in golf club innovation, unveiled its new KING F9 SPEEDBACK irons and hybrids, the company’s most powerful and stable irons and utility clubs ever. The new SPEEDBACK irons and hybrids utilize COBRA’s breakthrough SPEEDBACK technology, that for the first time successfully combines a low center-of-gravity (CG) and high moment of inertia (MOI) to deliver the perfect blend of ball speed and forgiveness, for the first time, in one iron.

Available in a traditional, variable length set make-up and a forward-thinking, ONE Length configuration, the KING F9 SPEEDBACK irons are packed with an impressive array of cutting-edge technologies designed to deliver unrivaled performance. Traditionally, in game improvement irons, golfers had to choose between distance or forgiveness. In the new F9 irons, COBRA engineers were able to deliver the ultimate combination of both through SPEEDBACK Technology, a design concept that utilizes innovative shaping elements different from a traditional game-improvement iron. Through SPEEDBACK shaping, engineers were able to optimize low CG and high MOI to create the company’s longest, fastest, and most forgiving iron.

“It cannot be overstated just how technologically-advanced the KING F9 SPEEDBACK Irons are,” said Tom Olsavsky, Vice President of R&D for COBRA Golf.  “Golfers have been forced to choose between  distance or forgiveness in their game improvement irons. If you wanted more distance, then you sacrificed forgivness, and vice versa. With the new SPEEDBACK irons golfers can have their cake and eat it too.  Never has a game improvement iron set had the perfect blend of distance and forgiveness, until now.”

Key elements of SPEEDBACK Technology include:

Low CG SPEEDBACK Sole – Mass is added low and back using a belt of steel that wraps around the back of the iron, creating a lower and deeper CG that maximizes ball speed, launch and carry distance. SPEEDBACK shaping strategically positions the weight belt just above the contact area on the sole to maintain the sole width of a conventional game-improvement iron.

High MOI Design – To maximize performance, SPEEDBACK shaping allowed more mass to be added low and wide (out to the heel and toe) compared to a traditional iron. Also, up to a combined 33 grams of Tungsten were added to the heel and toe in the 4-7 iron, a material used in premium priced irons.  These shaping improvements increase MOI by up to 10% in the long irons, creating more stability through higher inertia that results in substantial improvements in ball speed, distance, forgiveness, and even accuracy.

Other technologies featured in the irons include:

Forged E9 PWRSHELL Face – An improved E9 (variable thickness) face is 3 grams lighter and features thin, 1.8 mm pockets in the upper heel and toe that expand the SWEET ZONE area on the face. The forged PWRSHELL insert features a deep undercut sole design and an all new2 mm internal Speed Channel that absorbs and returns more energy to the ball for faster ball speeds and increased launch angle.

CNC Milled Face and Grooves – CNC precision milling delivers more accurate lofts and allows for tighter tolerances on face roughness and groove shaping to optimize spin and trajectory control. Unlike cast grooves, which can vary in shape, CNC milling reduces the variability in the groove shapes to ensure that the performance is consistent in every iron.

Progressive Spin Technology – The long irons, mid irons and wedges are each designed with different groove shapes to deliver specific performance characteristics. CNC milled V-grooves in the 4-7 irons improve distance by reducing spin for increased distance and flight time, while U-grooves in the 8-PW optimize spin for improved control and accuracy.  Tighter-spaced wedge grooves in the GW and SW maximize spin and improve trajectory control for enhanced greenside precision.

COBRA CONNECT – The COBRA CONNECT, Powered by Arccos system features electronically enabled grips that work in conjunction with the Arccos Caddie app to give users the ability to track their stats and improve their game. **Consumers who purchase a COBRA 6-piece (or greater) iron or combo set will receive complimentary screw in sensors, or smart, COBRA CONNECT grips, to utilize on the rest of the clubs in their bag, including one putter sensor (valued at $350).

In addition, COBRA Golf is introducing an updated option for players who opt for the consistency and simplicity of a ONE Length set configuration.  The KING F9 SPEEDBACK ONE Length Irons offer all the same ground-breaking technologies as the variable set, with some additional improvements geared towards optimizing the performance of ONE Length irons including:

ONE Length Configuration – Engineered using matching 7-iron length and head weights, a ONE Length set simplifies the game by promoting a single, repeatable setup and swing motion through the set, leading to more confidence and consistency.

Progressive Shaft Weighting – 3 different KBS shaft weights – a lightweight, Tour 80 in the 4-6 iron promotes high launch, a mid-weight Tour 90 in the 7-9 iron delivers control and accuracy, and a heavy-weight Tour Wedge in the PW-SW improves feel and precision on specialty shots around the greens.

Providing the perfect complement to the SPEEDBACK Irons, COBRA is also unveiling its new KING F9 SPEEDBACK Hybrids, available in variable length or ONE Length designs.  COBRA has integrated its breakthrough SPEEDBACK technology with its popular Baffler rails to produce the highest performing Hybrid in its history.  This Hybrid’s performance can be attributed to the following key technologies:

SPEEDBACK w BAFFLER Technology – This year, COBRA has improved upon its BAFFLER Rails by adding SPEEDBACK, a low, back weight structure that sits in-between the two rails, which are strategically centered around the clubs’ center of gravity. These technologies fuse to deliver the best combination of low CG and improved turf interaction, increasing ball and club speed to maximize distance from any lie.

Forged 455 High-Strength Stainless Steel Face – maximizes the amount of flex at impact for increased ball speeds and distance across the entire face.

High MOI Design – Shaping improvements include a 10% larger clubhead compared to KING F8, creating a higher MOI for increased forgiveness. Additionally, the hybrid features a straighter leading edge that allows golfers to align the club to the target similar to how they would with an iron for improved accuracy.

Back CG Position – A fixed, external 15-gram tungsten weight is positioned low & back, creating a low/deep CG that produces more speed and high, towering ball flights. The 15-gram weight is interchangeable, allowing golfers to golfers to customise their swing weight.

The KING F9 SPEEDBACK ONE Length Hybrids (MAP $219) offer the same performance boosting features that the traditional length hybrid options do, with the infusion of COBRA’s patented ONE Length configuration.  Engineered using matching 7-irons length and lie angle, the SPEEDBACK ONE Length hybrid simplifies a players’ game by allowing them to use one repeatable set-up and swing for their irons and hybrids.  These hybrids are available in 19-degree, 21-degrees and 24-degrees of loft and come standard with ATMOS ONE Length 70-gram shafts in S, R or LITE flexes with blue Lamkin Crossline COBRA CONNECT grips.

“We have seen some golfers put this consistent, easy-to-hit ONE Length Hybrid in their bag, replacing their more difficult to hit long irons, or even a variable length hybrid. It’s really a great club that golfers can hit consistently, with confidence,” said Jose Miraflor, VP of Marketing COBRA Golf.