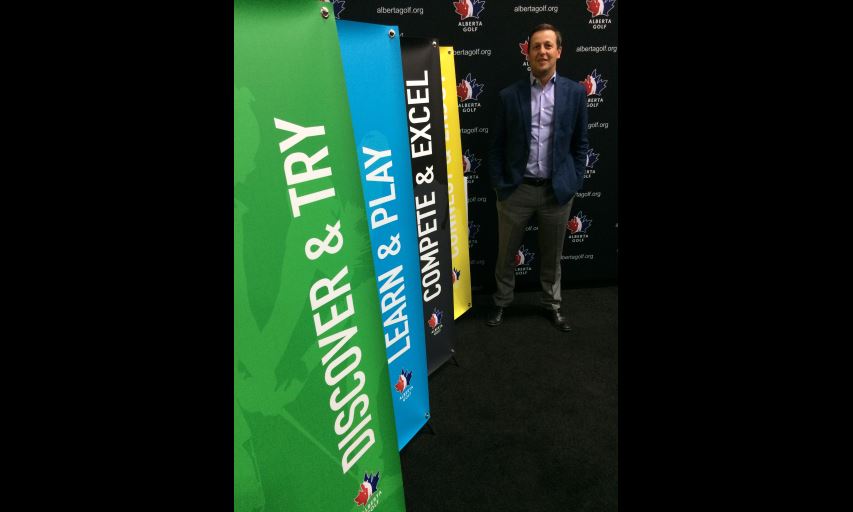 In making this move to a more recognizable identity, the executive director of Alberta Golf, Phil Berube, explained this is being done to make recreational players aware of the importance of the provincial body and the fact that they are about more than high-performance golf and enforcing rules and regulations.

“We’ve been trying to figure out the roles that Alberta Golf plays in the industry and then trying to get the average golfer to understand what Alberta Golf does and how they can benefit from the services we provide,” Berube began. “This roadmap we’ve been working on through all these stakeholder meetings to get to this point to answer that question: What is Alberta Golf?

“It’s in line with the Canada Sport Policy. It’s in line with the LTD, the Long Term Athlete Development program, where you have people who enter the game, learn the game, compete in the game and then enjoy the game. All of Alberta Golf’s programs now are going to be placed into one of these four pillars that is going to help the average golfer understand and what Alberta Golf can do to help them learn more about getting into the game.”

Berube emphasized that it isn’t necessary for each new player that enters the golf stream to take part in all four stages. They may enter where they want, skip a stage if they wish, or simply stay put once they enter into the sport if they feel comfortable where they are.

“Absolutely. If you’re someone who just wants to find out more, or you have a neighbour who comes to you wanting to know how to get their children into the game, you just follow the Alberta Golf roadmap and look at one of our Discover events. That may just lead them right to the Enjoy portion, where they can just go and enjoy golf as a recreational activity.

“But if they decide at one point they want to go and take lessons, we can point them in the right direction and work with that PGA professional to help them get better at the game.”

During its roundtable meetings, it was discovered Alberta Golf was running 124 different activities within its programming. That number has now been winnowed to 36, including popular introductory ideas like Golf In Schools and FutureLinks along with several community initiatives.

“We’re going to be aligning all of those entry level points where people learn about the game, discover the game,” Berube continued about how the word on this plan was being spread. “At the PGA Consumer Shows (in Edmonton and Calgary) in March, that’s a great opportunity for people to come and discover what the game is about and where they can go and learn more about playing the game more often. Each of these pillars will help golfers understand where those opportunities are.”

Despite changing the public’s perception that Alberta Golf is only concerned with the competitive end of the sport, that in fact does remain a high-profile side of the association. That was emphasized recently when a former Alberta Golf protege, Jaclyn Lee from Calgary, a former ladies amateur provincial champion, received status on the LPGA Tour.

“A few years ago those events (amateur championships) were considered our major strength, running our championships, supporting athletes at the elite level. At the same time, we didn’t want it to be the only thing we’re known for, so that’s why we’ve expanded into the four pillars,” Berube noted. “So, we will continue to run those provincial championships,” but also continue to grow the game at the recreational level.

“What Alberta Golf did really well in the past was competitions. So it comes back to the fact you had a handicap so you could compete in one of our events. A few years ago Golf Canada looked at how they could help the golfer on the recreational side more because that’s where 80 percent of the golfers are, the average person that just wants to go out and play for fun,” and Alberta Golf is following along the same pathway.

“One of the terms we’re using is your ‘golf journey.’ Mapping your golf journey. If we can get more kids involved early and get attached, they can look back at their golf journey. That might be a pretty cool story.”

In closing, Berube explained that all this time and effort put in by stakeholders in coming up with this new, improved face of Alberta Golf has been worth all the hours spent in getting to this point. As well, he suggests that golf could well see another boom in the coming months and years.

“I don’t think the game has peaked. I think it’s troughed. I think we’re going to see another cycle come back where it’s going to grow again. That’s what it feels like,” and that’s evidenced by the time and effort the provincial body continues to put into growing the game and in making people aware that Alberta Golf is about everyone and all levels of golf, not just high-end players and major competitions.

For more on Alberta Golf and its programs, go to albertagolf.org.