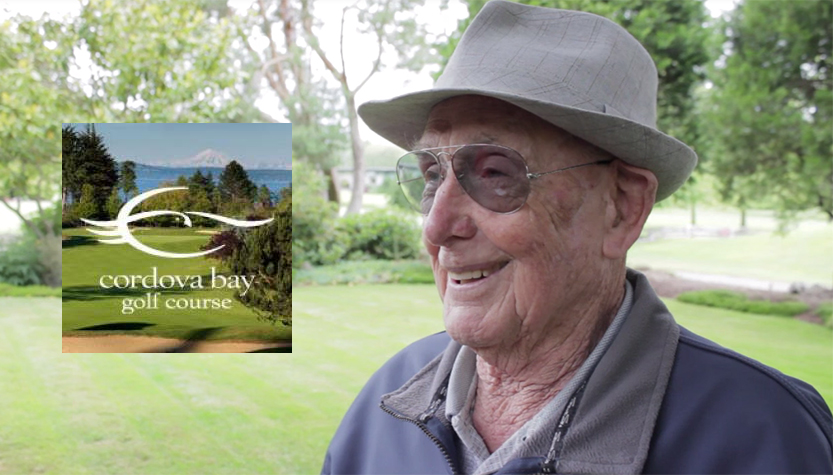 Victoria's golf community has lost an icon. After more than 7 decades involved in the world of golf, Laurie has walked his final fairway. He passed away peacefully on November 14, predeceased by his wife of 54 years Doreen in 2011 and his brother Richard in 2015. He will be lovingly remembered by his son Scott (Chris), daughter Susanne (Shawn) Quast and grandchildren Nicole and Adam.

Laurie's career had stops as the Assistant Professional and later the Head Professional at the Victoria Golf Club. Later he became the owner and operator of Douglas Golf Lands, a driving range and par 3 course that started on Vanalman Avenue but ended up occupying Cordova Bay's current driving range and parts of hole 1,9,10, and 18. Laurie spent his days there dispensing his vast knowledge on golf and life from the lesson tee. Generous with his time, particularly with young people, he taught and he taught and he taught. Always quick with a story, we listened to stories about Hope, Crosby, Nelson, Player and others that he encountered over his career. We were captivated to hear about a life in the game.

In the early days of Cordova Bay Laurie transitioned to our lesson tee, some 75 yards away. Laurie Carroll taught Victoria how to golf. To this day, all you have to do is work in the pro shop for one week and you will be convinced that there is not a single golfer in Victoria over the age of 40 that has not taken a golf lesson from him, usually their first.

As Cordova Bay's first Director of Golf he was relied upon heavily for advice by the developers of the course and is directly responsible for much of Cordova Bay's current success. After 10 years or so Laurie "retired" from teaching but he did not leave the lesson tee. Laurie was a fixture at the driving range, dispensing advice and encouragement as he walked past. "Here give me that G'd' thing ... watch ... now hit it like this". "Did I tell you the story about ...".

Please join us for a celebration of Laurie's life at Bill Mattick's Restaurant on Sunday, December 2nd from 12 -3 pm.

All members are welcome to attend and spend the afternoon remembering Laurie and all his stories.