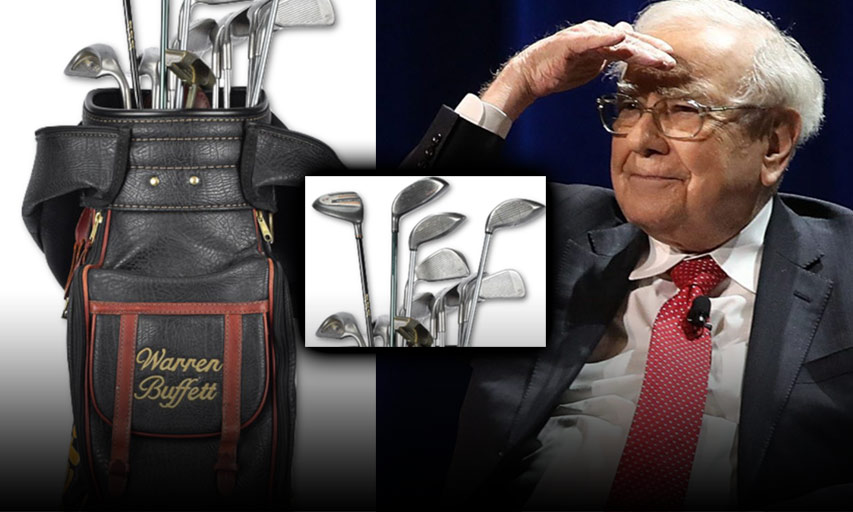 The lot is comprised of Buffett’s personally-owned and used set of golf clubs; that includes his customized golf bag and fourteen clubs, given to the one-time fiancée of his granddaughter.

The bag itself features his name embroidered in gold on the front flap, "Warren Buffett," with the logo of Berkshire Hathaway subsidiary NetJets on both sides; attached is a plastic 2005 Allen & Company Sun Valley Conference tag, with affixed green labels, "Buffett" and "88."

Wrapped around the handle of each club is a Warren Buffett property tag, most reading: "Omaha Country Club, Warren Buffett, Omaha, NE 68152." The golf clubs include: nine Ping Eye2 clubs (wedge, sand wedge, and irons 3-9), an older Ping putter, Callaway Heaven Wood, Callaway Divine Nine, and two Orlimar Trimetal drivers (13° and 16°). Inside one of the bag's pockets are an assortment of tees, markers from Augusta National and the Seminole Golf Club (two of the world's most exclusive golf clubs), and bag tags from the Four Seasons Biltmore in Santa Barbara.

The consignor notes: "The clubs were purchased for Warren by the director of the Buffett Foundation and given to Buffett sometime in the 90s. They were his only set of clubs from then until now. The bag was custom made for Warren by NetJets (a Berkshire subsidiary). Warren personally handed me the clubs inside his home in 2016. He gave them to me after my clubs had been stolen. I was engaged to his granddaughter at the time and have had them in my possession up until this point."

Major business deals and mergers have developed from meetings at the conference, such as Verizon's acquisition of Yahoo, Jeff Bezos' purchase of The Washington Post, and Disney's merger with ABC.

A cautious investor, Buffett has not made major headlines stemming from one of these retreats.

Buffett's humble nature and quirky frugality are evident in these clubs—famed for remaining in his original Omaha home even after making his fortune, and for driving base-model Cadillacs for years and years, that he used only one set of golf clubs for well over a decade is both noteworthy and fitting.

The set is also rooted in his origins—as a teenager, one of his first business ventures was selling refurbished golf balls, buying them from a man in Chicago at $3.50 per dozen and selling them locally in Omaha for $6.

As chairman of Berkshire Hathaway, he has surely brokered deals over rounds of golf—since 1998, when Berkshire acquired NetJets, the firm has purchased well-known companies like Fruit of the Loom, Duracell, Clayton Homes, and Jordan's Furniture.

In 2010, inspired by his friend and sometime golfing partner Bill Gates, Buffett pledged to give away 99 percent of his wealth to charity—the same generosity seen here, at a much smaller scale, in giving his lone set of golf clubs to a future family member at a time of need.

(Estimate: $10,000+) “Having been well-used by one of the world's most successful businessmen, these golf clubs are truly remarkable and embody the essence of Buffett's life and legacy,” said Bobby Livingston, Executive VP at RR Auction.

Additional highlights include; a Dwight D. Eisenhower letter thanking a supporter of his golfing habits, and a Joe DiMaggio and Billy Martin signed ticket for a Celebrity Pro-Am golf event.

The Fine Autographs and Artifacts Auction from RR Auction began on January 18 and will conclude on February 6.

For information, visit the RR Auction web site at http;//www.rrauction.com