Pebble Beach Only A U.S. Open Preview Of The Scenery 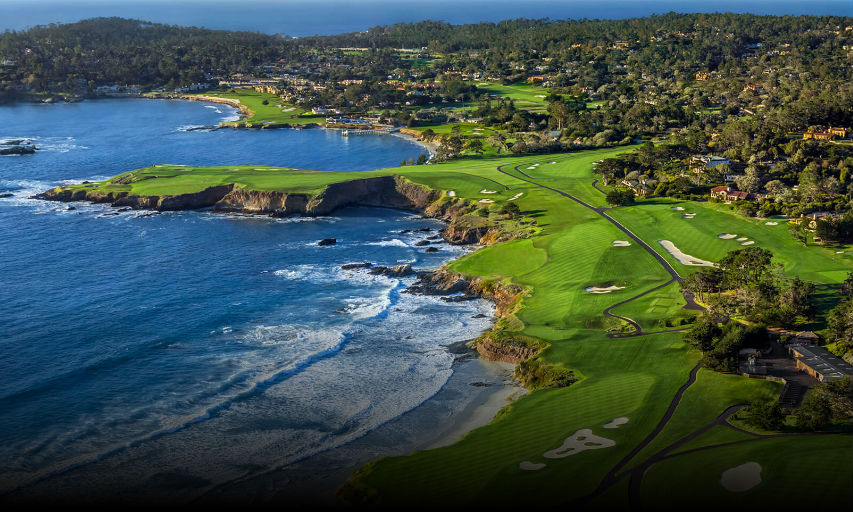 By DOUG FERGUSON, The Associated Press

PEBBLE BEACH, California — Only four American courses have hosted a PGA Tour event and a major championship in the same year, a concept that USGA chief executive Mike Davis does not consider to be ideal.

One big exception is Pebble Beach.

“I think this is great,” Davis said Wednesday as he walked down the 16th fairway.

“Because this is nothing like it will be June.”

The views won’t change, and they were as spectacular as ever on the eve of the AT&T Pebble Beach Pro-Am, with turquoise waves crashing against rocks and sending eruptions of white spray against the back drop of Pebble’s small greens.

But this is not a week for any scouting reports. Heavy rain over the weekend, with wind so strong it knocked over a corporate tent left of the sixth fairway, has saturated Pebble Beach so much that the turf sunk ever so slightly with every step on the fairway.

Davis Love III didn’t see where his shot landed on the 10th green because it was plugged, only the top half of the ball showing.

No, this isn’t a sneak preview of the U.S. Open.

It’s not a complete waste of time, either.

Tommy Fleetwood of England is making his debut in the tournament, and he was so enamoured being on the Monterey Peninsula that he quite happily played through the chill and a few hail stones during a practice round Tuesday.

“It’s just one of those few places in the world that has like an aura and an atmosphere about it and you feel very lucky to be playing golf this week,” he said.

He only picture what it will be like when Pebble hosts the U.S. Open for the sixth time in June.

“It’s nowhere near what it’s probably going to be like,” Fleetwood said.

“There’s so many guys that have played the PGA Tour for a long time will have been here. They know it. They feel comfortable. For me, this is the first time, so any advantage I would have had just turning up in June is much more positive and good for me.”

Torrey Pines also hosted a PGA Tour and U.S. Open in the same year in 2008 (Tiger Woods won them both), and that will happen again in two years.

That much was obvious on No. 8, which has a white, knee-high rock on the hill leading up to the fairway as an alignment aid.

The rock is not there this week, because any shot over it would wind up in the rough, not the fairway.

“The fairways taken in is what you notice immediately,” Jordan Spieth said.

“The rough is actually lower than it has been in past years for this tournament right now. But the fairway lines … like our yardage books look different from last year to this year. They have started to take them in already, and you’re starting to see the fairways that we’re going to see for the U.S. Open. It just will play wider given how soft it is. The ball is not rolling.”

Spieth won the AT&T Pebble Beach Pro-Am two years ago and is back in his regular group, with country singer Jake Owen as his amateur partner alongside two-time Pebble champion Dustin Johnson and Wayne Gretzky.

Johnson is coming off a victory last week in the Saudi International and only arrived from his home in Florida on Wednesday morning.

Masters champion Patrick Reed also was in Saudi Arabia and will be playing in his usual group alongside Phil Mickelson.

The sky cleared Wednesday and it should be reasonable for at least a few days across Pebble Beach, Spyglass Hill and the Shore Course at Monterey Peninsula, with more rain expected Friday and into parts of the weekend.

For some players, Pebble is beautiful in any weather.

“When you’re here … it’s kind of like a holy golf ground if you will,” Tony Finau said.

“And it’s never not a thrill to play Pebble Beach.”

With so much rain over the last few days, and the forecast for the weekend, players will likely be able to lift, clean and place their golf balls in the short grass.

That’s not unusual for this tournament. It might be unusual for Davis and few others on the USGA executive committee.

The U.S. Open never uses lift, clean and place — another example that while it’s the same course, this isn’t the U.S. Open.