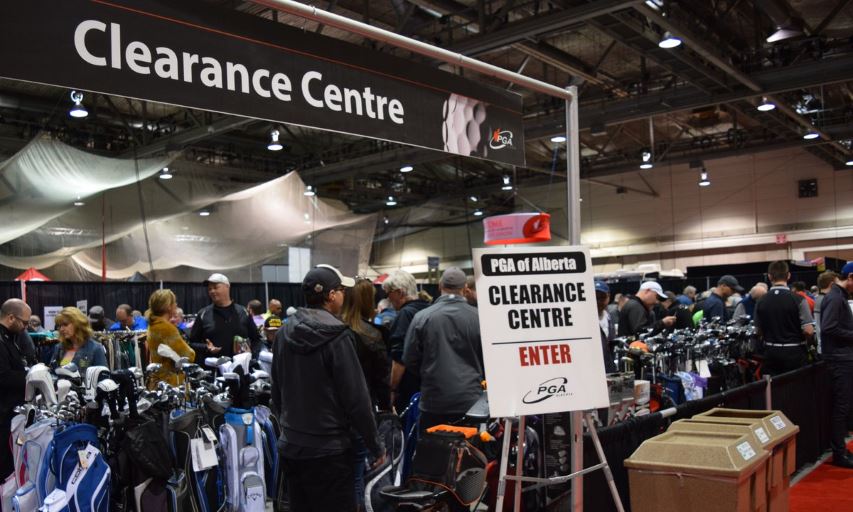 EDMONTON, Alberta — With 2019-model drivers now topping the $700 mark and fairway woods coming in at around $400, many golfers are left trying to figure out where the good deals in golf gear are these days. Well, we might just have the answer to that question for you.

While the gear offered up at the annual PGA of Alberta Consumer Shows in Edmonton and Calgary isn’t the latest and greatest, it is unused and it is no more than two years old. And the prices tacked to the clubs are bargain-basement worthy, whether you’re seeking a ‘new’ driver, 3-wood, putter, or a complete set for that matter.

Speaking to the Calgary show in particular, Joel Douglas from Cottonwood G&CC, said the deals at the show are too good not to pay attention to, especially when one considers how much inventory is on hand. And with at least 15 different courses taking part in the Calgary show’s Clearance Centre this year, it’s almost a slam-dunk there’s something there that will catch your eye.

And it’s not just clubs that are on sale. Everything from upper-end clothing to pull carts, bags to balls, and more, is on sale as clubs look to dispose of old inventory in order to make room for this year’s offerings. The value to the consumer is extraordinary, Douglas said.

“Oh yeah. Definitely. Last year we had a record year of sales,” which meant both con-sumer and retailer found exactly what they were looking for, be it great deals or unex-pected income. “For us to be able to get rid of $10,000 to $15,000 worth of inventory is awesome!”

As to spending money in this way, where yes, golfers in Calgary at least are allowed to try their finds out on the indoor driving range, the pro said it’s a no-lose deal. “It’s bene-ficial for the consumer for the price they’re paying for the clubs, if they’re not looking at getting properly fit. I’m a big believer in getting fit properly for golf clubs, but if they want to try them on the range, they can, and lots of people do.”

Asked what he saw as the best deal in this area of the Calgary show, the pro quickly re-plied, “I’d honestly have to say the best deal for consumers (at the show) would have to be Pro Vs. You’re not going to get Pro Vs for cheaper than you are there. And, high-end clothing like Travis Matthews, rain suits, anything like that. Things that are like $140, $150 normally, you can find for 40 to 60 bucks. That’s a really good bargain.”

In Edmonton, Gary Christenson from Sturgeon Valley GC in St. Albert, has been in-volved in the local show for at least eight years. And, he notes, there is a reason golf courses take part so wholeheartedly in this event.

“It’s a great chance to liquidate some inventory and get some dollars for the next year, basically,” he began, noting that people that line up early at the shows’ doors to grab great deals are a specific kind of buyer.

“There are two types of golf buyers. It’s no different than buying cars: Do you buy new or used? So, some people want the newest, best and greatest while some people will wait a year or two because there’s a two-year life cycle for product.”

The mark-down on goods varies, said Christenson, depending on the course putting it on sale. This year, there will be 14 area courses at the Edmonton sale.

“It (cost) depends on the age. Really, the only rules we have is nothing new goes into that Clearance Centre. Some stuff, it’s just mark it with what you want. They’re not doing any good sitting on the shelf and eventually, they’re not worth anything to you, right? So, this is really a good opportunity for the consumer to hop on some opportunities.”

As for what he sees as the best-buys at the Edmonton show, Christenson suggests it’s clothing.

“A big part of it is the amount of clothing you can look for. You’ll see more variety there than anywhere. Clothing doesn’t typically go bad. Styles, unless you’ve had it for eight years … yeah, clothing is great because you may find deep-discounted stuff.”

While there isn’t any exact numbers on how many dollars have been spent over the years on all the items available at the two shows during these two weekends, be it shirts, shoes, balls, bags, clubs or accessories of all sorts, it likely has to top at least $1 million per show, Douglas feels.

So, if you’re looking to cash in, and then cash out, on some great golf gear deals, be sure to hit the Clearance Centres early, because the greatest deals there certainly don’t stay on the display shelves any too long. The Edmonton show goes at the Expo Centre, in Hall C this year, on March 9 and 10, while the Calgary show goes at the BMO Centre, Hall B on March 23-24. Pricing is $12 for adults (13 and up); $11 for seniors (65+) and students (with ID); and kids under-12 are free.

For a full list of exhibitors at both shows, go to pgaofalberta.com under the Events icon.