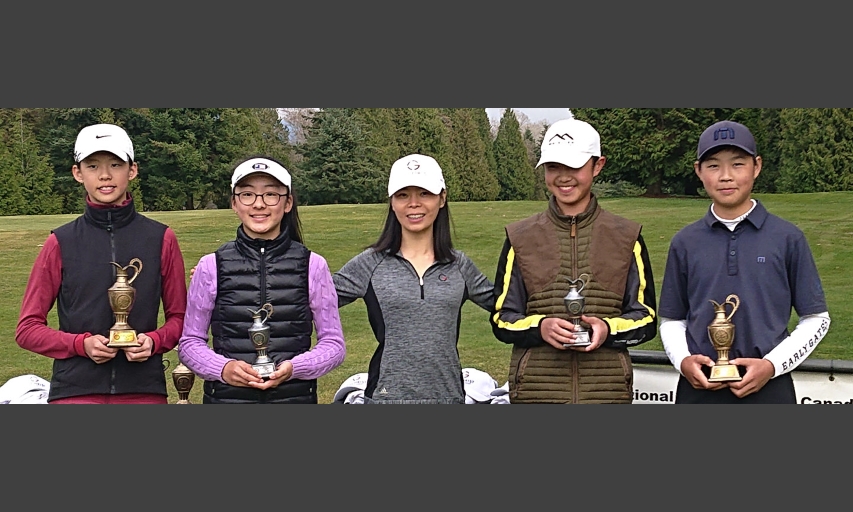 VANCOUVER, British Columbia — The inaugural Gary Gilchrist Golf Academy BC Spring Classic wrapped up at University Golf Club in Vancouver, BC, with several familiar names topping the leaderboard at the first domestic event of the CJGA’s 2019 tournament season.

Fifteen-year-old Brycen Ko of Vancouver showed he is prepared for his second full year of Junior (U19) eligibility with a win in the Junior Boy’s division firing rounds of 71-70 for a two-day total of 141 (-3).  The victory gives him back to back wins on the CJGA Junior Tour, and once again showed his reverence for University Golf Club as he also took home the title at the 2018 fall series event held there last October.  Ko finished 3 shots ahead of Delta, BC’s Jace Mini and Vancouver’s Freddy Sun who finished at even par (144) for the tournament.

Click here for complete results from the Junior Boys Division.

In the Junior Girls (U19) division, Surrey’s Angela Arora showed she is ready to take on the next level of competition firing a two-round total of five-over-par (149) to finish two shots ahead of Sonja Jiawen Tang (151).  The victory marks the first Junior Division win for the 14-year-old who moved up a division in 2019 after taking home a win in the Bantam (U15) division in the 2018 CJGA BC Junior Open.

Click here for complete results from the Junior Girls Division

Burnaby, BC’s Luna Lu’s two round total of 152 was enough to give her a five-shot victory in the Bantam Girls (U15) division over Ye Ji Kwon of Port Coquitlam.  The win is the 3rd for the 11-year-old who continues to show she is more than capable of competing on the CJGA Junior Tour.  Lu had two wins on the Junior Tour in 2018 at Hazelmere in June and the season ending event at University Golf Club in October.

Click here for complete results from the Bantam Girls Division

13-year-old Aaron Huang finally secured his first win on the CJGA Junior Tour in the Bantam (U15) division after having four top-3 finishes in 2018.  The Vancouver, BC native followed his opening round 3-under-par (69) with a 71 in round two to finish at 4-under-par (140), the low total of the tournament.  His two-day total was enough to put him safely 6-shots clear of Fred Yang and William Tu, who finished at 2-over-par (146) for the tournament.

Click here for complete results from the Bantam Boys Division

The players now get a short breather before they head to Northview Golf Club to compete in the first CJGA Regional Championship of the 2019 tournament season at the Humber College PGM Western Canadian Championship presented by TaylorMade which starts Wednesday.