Tiger Woods’ Win Could Have Golf Industry Roaring Back 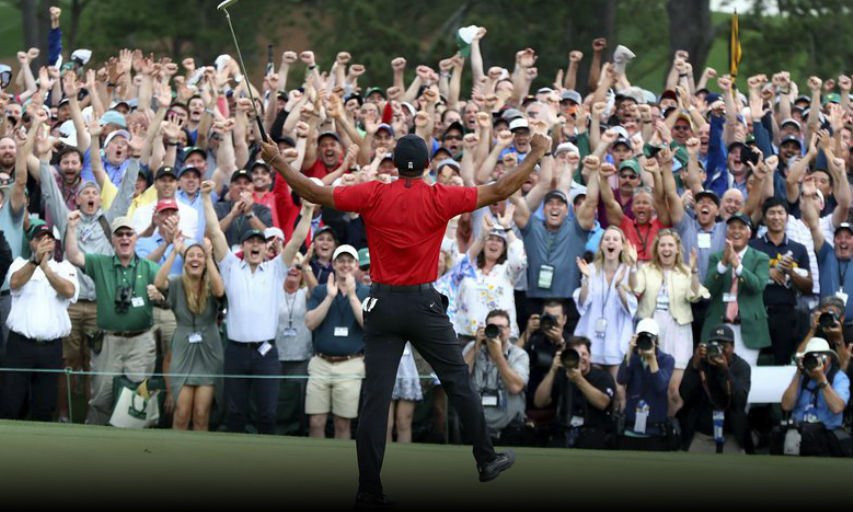 NEW YORK (AP) — Tiger Woods’ win at the Masters could revitalize the golf industry, which has struggled in the past decade while the game’s biggest star was hobbled by issues on and off the course.

Bridgestone Golf, whose logo was on the golf balls Woods used, says its website traffic soared after the Sunday win. PGA Tour Superstore, which sells golf equipment online, says sales were up over the weekend by 50% from a year ago.

And shares of Nike, the sponsor that stood by Woods after his 2009 car crash and reports of extramarital affairs, rose Monday, as did the stocks of other golf equipment makers that aren’t connected to Woods.

“The golf industry has been waiting for him to win again,” said Rick Burton, a professor at Syracuse University’s David B. Falk College of Sport and Human Dynamics.

TV ratings of golf tournaments and sales of golf equipment are likely to rise, he noted.

It had been 11 years since Woods had a major win — and enthusiasm for golf seemed to wane during his drought as he battled injuries and worked to repair his reputation.

Nike stopped selling golf equipment in 2016 to focus on apparel.

About a year later, rival Adidas sold off its golf business. What Adidas sold off was a golf club maker, and that Adidas still offers golf apparel, footwear, and accessories. And Golfsmith, the largest golf retail chain in the U.S. at the time, filed for bankruptcy protection and was later bought by Dick’s Sporting Goods.

On Sunday, Nike didn’t waste time capitalizing on Woods’ win, posting a video on Twitter that had more than 24 million views by Monday afternoon.

During the tournament, Woods wore head-to-toe Nike with the hard-to-miss swoosh logo on his hat, shirt, pants, and shoes.

PGA Tour Superstore said a red Nike shirt with a mock turtleneck, similar to the one Woods wore, was its top seller over the weekend.

“After an incredible win at the Masters, the Tiger effect is expected to kick off the start of the golf season better than expected,” PGA Tour Superstore said in a statement.

Apex Marketing Group, a branding consulting company, estimated the media exposure for Nike to be worth more than $22 million.

Other golf companies that aren’t connected to Woods also saw a boost.

“In the equipment business, we have an old saying: ‘Win on Sunday and sell on Monday,’” he said.

“And that’s what we’re doing.”