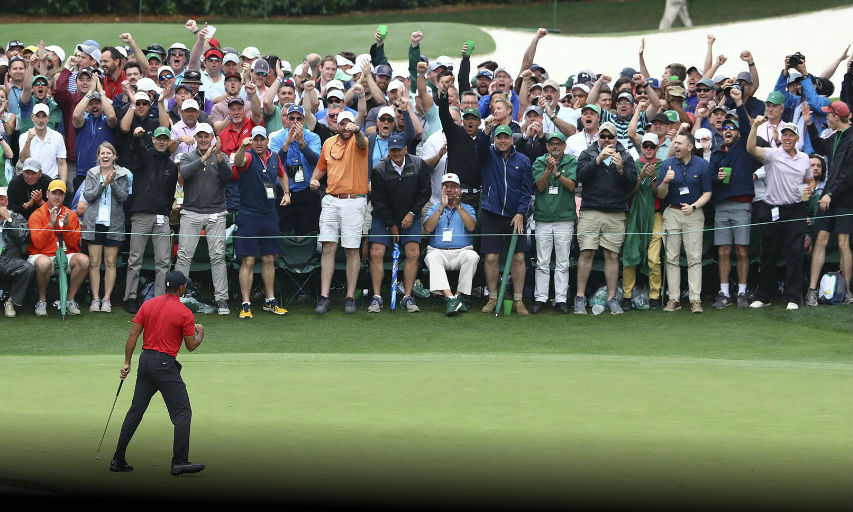 WEST PALM BEACH, Fla. (AP) — Tiger Woods hopes winning the Masters to end 11 years without a major will be a spark in his renewed pursuit of the record held by Jack Nicklaus.

Even so, Woods tells GOLFTV it will take “special moments” like his one-shot victory at Augusta National.

“The only thing I can promise you is this, that I will be prepared,” Woods said in his first extensive comments since leaving Augusta National with a fifth green jacket.

“Now whether or not it all comes together ... because you need to have mind, body and soul come together for those four days. That doesn’t always happen,” Woods said. “If you think about it, I’ve been out here what, 23 years or so? It’s only come together 15 times.”

Woods spoke to Discovery-owned GOLFTV in a 27-minute interview Thursday as part of his endorsement role to provide exclusive content to the global video streaming service.

Nicklaus set the gold standard in golf with 18 professional majors.

Woods won his 14th major in 2008 in the U.S. Open at Torrey Pines when he was 32, and breaking the record seemed inevitable until a fourth surgery on his left knee, and then four surgeries on his back in a three-year span.

“I always thought it was possible if I had everything go my way,” Woods said in the interview.

“It took him an entire career to get to 18, so now that I’ve had another extension to my career — one that I didn’t think I had a couple of years ago — if I do things correctly and everything falls my way, yeah, it’s a possibility.”

Woods believes his Masters victory — his first major when he was trailing going into the final round — began last summer when he briefly held the lead Sunday at the British Open, and then pushed Brooks Koepka to the end in a runner-up finish at the PGA Championship.

“Those two major championships allowed me to have this one,” Woods said.

“And hopefully, this one will allow me to have a few more.”

He attributed a big part of his Masters victory to a swing key leading up to the week that allowed him to hit draws with his driver.

Woods conceded he no longer has the length that allowed him to hit 3-wood off several tees, which he could hit right-to-left more easily.

“I’ve lost a little bit off my fastball, so I’ve got to rely on the driver,” Woods said.

“And so I found something in my game when I start feeling comfortable turning it.”

He also gave credit to his caddie, Joe LaCava, for persuading him to arrive at Augusta National on the Sunday afternoon before instead of Monday.

Woods said he was working so hard on his game that he wasn’t about to play, so instead, he took a wedge and a putter for nine holes.

“That nine-hole session on Sunday set the tone for my mind being opened up to see the amount of break,” Woods said.

Woods said he had been thinking about the Masters for six months.

Now he faces a quick turnaround — the PGA Championship starts in three weeks at Bethpage Black, where Woods won the U.S. Open in 2002.

He last played it in 2012 during the FedEx Cup playoffs, which is when he first complained of a sore back.

He says he will lean on experience of past preparations, such as his three straight majors in 2000 that he won in a span of 66 days.

For now, he has done very little. Woods compares this Masters to his first one in 1997 because it took time for the magnitude to sink it.

“I haven’t got to the point where I’m willing to put in the hours yet and do the dirty stuff to get the body ready, to put in all the hours of hitting golf balls and putting,” Woods said.

“I’m doing all the visual stuff, but I haven’t put in the physical work yet. But it’s probably coming this weekend.”