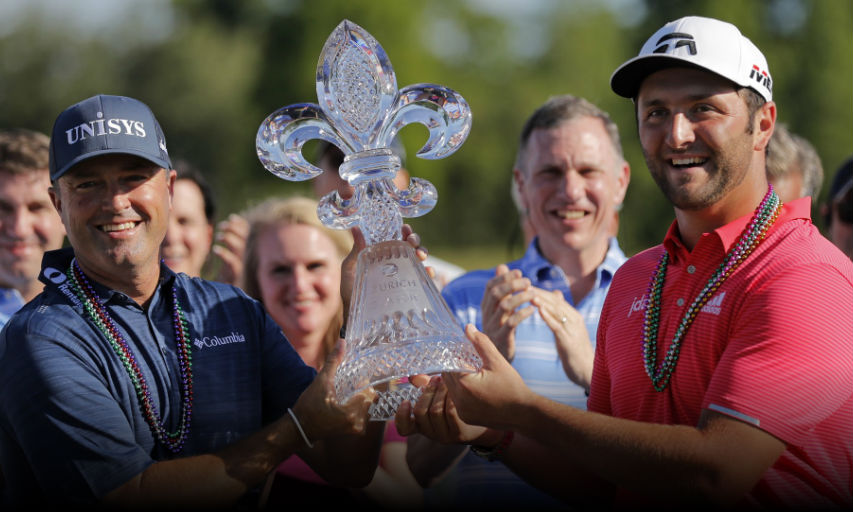 AVONDALE, Louisiana — Ryan Palmer and Jon Rahm shot a 3-under 69 in the alternate-shot final round to win the Zurich Classic, beating Sergio Garcia and Tommy Fleetwood by three strokes in the PGA Tour’s only team event.

The 42-year-old Palmer won his fourth tour title and first since the 2010 Sony Open in Hawaii.

He waved and gave a thumbs-up to TV cameras as he walked up the 18th fairway.

The 24-year-old Rahm won his third PGA Tour title — one each in three straight seasons.

The Spaniard finished in the top 10 for the seventh time this year, including a tie for ninth at the Masters.

Palmer and Rahm ended up playing together at Palmer’s suggestion after his past partner, Jordan Spieth, decided to skip the event.

Rahm was available because Wesley Bryan is out with a shoulder injury.

Palmer and Rahm finished at 26-under 262 at TPC Louisiana, which had dried out considerably since heavy rain delayed the first round by more than seven hours and forced many players to play more than 18 holes on the second and third rounds to get the event back on schedule.

Garcia and Fleetwood closed with a 68.

Kyoung-Hoon Lee-Matt Every and Brian Gay-Rory Sabbatini tied for third, five shots behind.

RABAT, Morocco (AP) — Jorge Campillo won the Trophee Hassan II for his first European Tour title, closing with a 2-under 71 for a two-stroke victory.

Making his 229th tour start, the 32-year-old Spaniard finished at 9 under on Royal Golf Dar Es Salam’s Red Course. He birdied the 16th and 17th holes and closed with a par.

American Sean Crocker was second after a 72.

Nuria Iturrios made it a Spanish sweep, winning the Ladies European Tour’s Lalla Meryem Cup on the adjacent Blue Course. The 23-year-old Iturrios shot a 3-under 70 for a seven-stroke victory.

SAN ANTONIO (AP) — Xinjun Zhang won the Dormie Network Classic at Briggs Ranch, closing with a 2-under 70 to complete a wire-to-wire victory and wrap up a return to the PGA Tour.

Zhang finished at 26-under 262 for a five-stroke victory. The 31-year-old Chinese player opened with rounds of 63, 64 and 65 to take a five-stroke lead into the final round. He earned $99,000 and jumped to No. 1 in the tour standings, with the final top 25 earning PGA Tour cards.

She earned spots in the Women’s British Open, Evian Championship, and the 2020 Augusta National Women’s Amateur. ...

Hye-jin Choi won the KLPGA Championship, beating So-yeon Park with a birdie on the first hole of a playoff.

Jiyai Shin closed with an 8-under 64 for a two-stroke victory in the Japan LPGA’s Fujisankei Ladies Classic.

Cydney Clanton won the Murphy USA El Dorado Shootout in Arkansas for her second career Symetra Tour title, beating Julieta Granada with a birdie on the third hole of a playoff.

Clanton finished with an even-par 72 to match Granada at 2 under. ...

He closed with a 7-under 64 for a one-stroke victory over fellow American Nicolo Galletti at Cordoba Golf Club in Argentina.