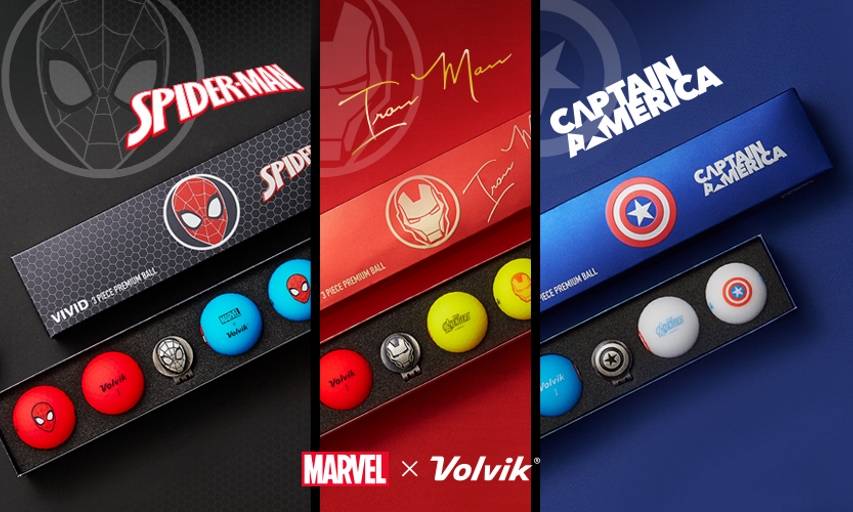 ORLANDO, Florida — Volvik reports record-setting sales of the Marvel x Volvik collaboration of Captain America, Ironman, and Spider-Man Vivid 4-Ball Sets. Since the release of the widely anticipated Disney film Avengers: Endgame, demand for the golf ball sets has been extraordinary. The film, setting box-office records, already is the highest-grossing film of the year and the 10th highest-grossing film of all time. Since the movie’s release Volvik has witnessed unprecedented demand from golfers, retailers and pro shops across the country for the Marvel special edition sets.

“Since the premier of Avengers: Endgame, demand for the Captain America, Ironman, and Spider-Man Vivid 4-Ball Sets has exceeded our most aggressive forecasts,” said Don Shin, president of Volvik USA. “The response to the introduction of our Marvel Collaboration has been extremely robust.

“We feel fortunate to have such a strong relationship with the Marvel team and look forward to continued success.”

The Volvik Vivid high-performance three-piece oversized matte-finish golf ball is the product platform for the Marvel Collaboration of Captain America, Ironman, and Spider-Man. Each set comes in a custom-designed package with four Marvel decorated Vivid balls featuring Captain America, Ironman, and Spider-Man logos, as well as a magnetic hat clip and custom-tooled ball marker. Each four-ball set retails at $24.99. The sets can be purchased directly on Volvik.com or by calling 407-649-0013. Pro shops and retailers may order the sets from their local Volvik representatives.

The limited-edition sets are the first step in a series of Volvik product introductions that will continue throughout 2019 and beyond.

About Volvik
Golfers everywhere are discovering Volvik, the founder of the matte-finish golf ball and maker of the #1 matte-finish VIVID ball. With a tagline of “Change the Game,” Volvik is making golf fun again. Young golfers are increasing their engagement with the game because they love the Volvik colors, while experienced players are realizing that Volvik, “not just a pretty face,” manufactures golf balls that provide players with power, distance, precision and control.

With over 40 years of golf ball production, Volvik has led the way with unparalleled innovation, rapidly becoming one of the most significant and trusted golf ball manufacturers in the world.

Volvik is dedicated to the production of specialized 3- and 4-piece multi-layer high performance golf balls for players of every skill set, featuring 58 worldwide patents. Volvik’s patented SF matte coating has led to the development of Vivid, the world’s first matte finish golf ball.

Volvik’s product line portfolio has been in use on the world’s professional tours since 2012. Players using Volvik golf balls have earned millions of dollars in prize money on the PGA TOUR, LPGA Tour, Champions Tour, Web.com Tour, Ladies European Tour, LAGT and Symetra Tour, with multiple victories. The Volvik Vivid XT is the official golf ball of the World Long Drive Association tour, and Volvik is the title sponsor of the Volvik World Long Drive Championship. The Vivid XT provides high visibility from Volvik’s patented SF matte coating, and explosive distance and power from its patented dual core technology.