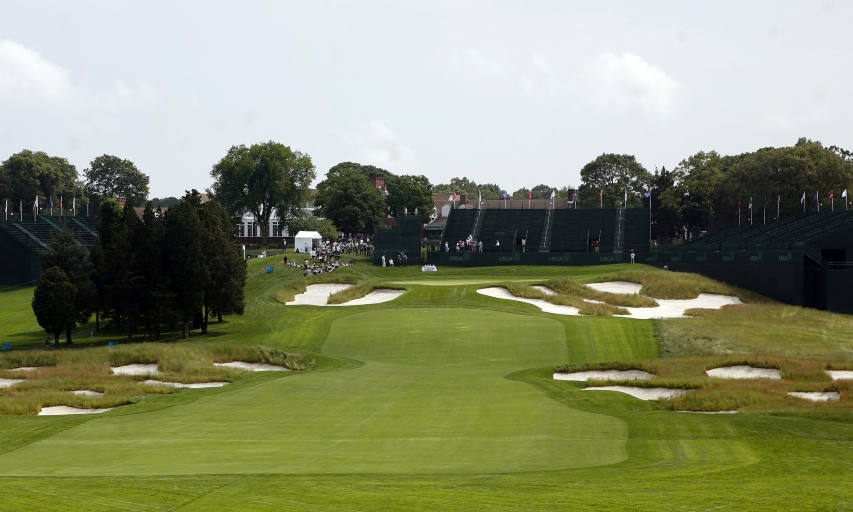 FARMINGDALE, New York — A hole-by-hole look at the Black Course at Bethpage State Park, site of the 101st PGA Championship to be played May 16-19. Includes combined rank and scoring average of each hole from the 2002 and 2009 U.S. Opens:

The opening shot from an elevated tee bends to the right, with a cluster of trees on the right blocking any approach that takes on too much of the bend. The left side allows for a better angle to the green that features a bunker on the front right. The front third of the green slopes sharply, so anything short or with too much spin could roll off the green. This is the smallest green on the course.

This is the only par 4 under 400 yards, featuring an elevated tee shot and then a short iron to an elevated green. The fairway bends to the left between trees on both sides. The left side of the green falls off sharply, while the right side is protected by deep bunkers.

The shallow green is angled from back left to front right, with bunkers on the left side so deep that players will only be able to see the top part of the flag stick. Anything long will drop off severely behind the green.

While short by par 5 standards, it features a green some 50 feet above the landing zone for tee shots. The fairway bends to the left around a cluster of bunkers. The cross bunkers only come into play if someone misses the fairway into thick rough. The elevated green is protected by a series of bunkers. The safe play for those going for the green in two will be to the right, setting up an easy pitch.

Massive cross bunkers hug the right side of the hole, though they can be carried by the longest hitters. The ideal play is down the right side because trees cover a ridge along the left side. The green is small and well-bunkered.

A straightforward hole, with large bunkers making the fairway appear even more narrow. The fairway drops some 20 feet. Driver is a bold play to get down to the lower portion and leave a wedge to a small green surrounded by bunkers.

This plays as a par 5 during public play. The tee shot is fairly straight before it turns to the right, with tall trees down the right preventing players from taking off too much of the dogleg. The approach is a long iron to a green that is not elevated and will allow the ball to run onto the green. A large bunker guards the right side, with a small one to the left.

From an elevated tee, the green is guarded in the front by a pond, with large bunkers on the left that really only come into play for back pin positions. A tall oak and a steep dune are to the right of the hole. The bank in front of the green is shaved, meaning anything short is likely to roll into the water. The green has a ridge that could serve as a backboard.

The hole bends to the left with a large bunker complex on the left side of the landing area. Playing short of the bunkers leaves a longer shot from a contoured fairway with a limited view of the green. Two deep bunkers protect the front of a relatively flat green.

A far tougher start for those teeing off on the back nine during the opening two rounds. It’s a straightaway hole that requires a strong tee shot to get to fairway. Anything left will find tall fescue, bunkers or hollows. The elevated green is guarded by bunkers.

A blind tee shot to a fairway tucked between dunes should favor the right side for a better angle into the most severe green on the course. The putting surface has a false front, causing problems for any putt or chip from beyond the hole. Bunkers protect the front part of the green.

Arguably the toughest tee shot on the Black Course, players can hit driver over cross bunkers to shorten the hole, or play safely out to the right of the bunkers. Any drive hit too straight could run through the fairway into the rough. The second shot is straightforward to a large green with severe undulations.

The longest hole is made slightly easier because it is straight and reachable in two by long hitters on firm turf. A large bunker on the left is in play off the tee, while cross bunkers some 30 yards short of the green will be a problem for anything that comes up short. The green slopes slightly from back to front, with a bunker to the right among the deepest on the course.

The shortest hole on the course is the only par 3 that played under par in the two U.S. Opens. The short iron is over a valley to a green that slopes from back to front and from right to left, with a shelf on the top. Gaping bunkers will grab any shot that comes up slightly short. This is the second straight birdie chance before the tough finish on the other side of the road.

The hole bends to the left and climbs up a steep hill over the final 180 yards to an elevated green that is protected in front by deep bunkers. Anyone missing the fairway likely won’t reach the green from the rough, or be able to hold the green. The green is 50 feet above the fairway with two tiers that slope from the back left to the front right.

The tee shot drops some 60 feet down to a narrow fairway that angles from left to right and can be tough to hit because of the elevated tee. The hole bends gently to the left. A sprawling bunker is short and right of the green, with another bunker to the left. This is one of the few holes where the green can be seen from the tee box.

The slightly elevated green is 43 yards wide and is divided by a spine through the middle, effectively making two greens. A deep bunker guards the front of the green, with other bunkers catching shots that are right, long and left.

Among major championship venues in the U.S. over the last two decades, only Olympic Club has a shorter closing hole. The tee shot is downhill to a narrow fairway that threads a large cluster of bunkers and fescue on both sides. Players can stay short of the bunkers and only have 160 yards to an elevated green that slopes severely from back to front. Lucas Glover hit 6-iron off the tee and had 9-iron to the green when he won the 2009 U.S. Open.