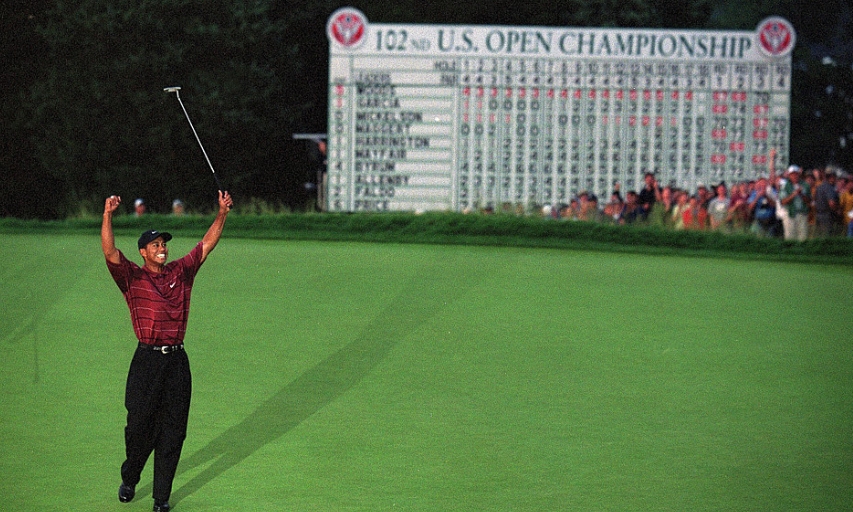 RECAP: The U.S. Open went to a state-run public course for the first time and Tiger Woods turned it into his private domain. Woods won his second major of the year, putting him halfway to the calendar Grand Slam, with a wire-to-wire victory at Bethpage Black. He started the final round with a four-shot lead over Sergio Garcia, who faded quickly. Phil Mickelson was five shots behind and was closing in when Woods hit 2-iron onto the green at the par-5 13th to set up a birdie, and Mickelson bogeyed two holes near the end. Woods finished with two bogeys over the last three holes for a 2-over 72, the first time he won a major with a final round over par.

NOTEWORTHY: The victory gave Woods seven of the last 11 majors.

QUOTEWORTHY: “I don’t think anyone realizes how tough it is to win a major championship.” — Tiger Woods.

RECAP: The return to Bethpage Black turned into a week of mud, muck and endless rain delays that led to a Monday finish. The course was so soft that Mike Weir opened with a 64, Glover shot 64 in the second round and three other players had rounds of 65. Barnes broke the 36-hole record at 132. But it turned tough at the end. Barnes reached double digits under par in the third round and at one point had a six-shot lead until he began to cave. Mickelson, the only player at par or better all four rounds, made a late charge until he missed a short putt on the 15th. Glover closed with a 3-over 73 and played the 18th hole with a 6-iron off the tee and a 9-iron to the green for a two-putt par. Tiger Woods, who fell 10 shots behind after opening with a 74, tied for sixth, four shots behind.

NOTEWORTHY: Glover made only one birdie in the final round, on the 16th hole to take the lead.

QUOTEWORTHY: “I just looked at the scoreboard to make sure this was really happening.” — Lucas Glover.

RECAP: Watney turned a two-shot deficit against Sergio Garcia into a three-shot lead in a decisive four-hole stretch around the turn, and kept everyone at least two shots away the rest of the round. He closed with a 2-under 69 and a two-shot victory to capture the opening FedEx Cup playoff event. Garcia, coming off a victory the previous week in the Wyndham Champion, shot 75 in the final round. Dustin Johnson closed with a 68 and tied for third with Garcia. Tiger Woods, who led the FedEx Cup going into the postseason, shot 72-76 on the weekend and tied for 38th, 11 shots out of the lead. It was only the third time all year Woods finished over par. The other two were majors.

NOTEWORTHY: The second round was the first time Woods showed signs of back problems. He grimaced as he walked and struggled just to retrieve the ball from the cup. Woods blamed it on a soft mattress in his hotel.

QUOTEWORTHY: “I made more putts than I made all year.” — Nick Watney.

RECAP: Patrick Reed won his only tournament of the year at just the right time. He rallied from an early two-shot deficit and closed with a 1-under 70 to win the FedEx Cup playoff opener. Along with having a clear shot at the $10 million FedEx Cup bonus, The Barclays was the final tournament to automatically qualify for the Ryder Cup team, and Reed’s victory assured him a spot on the U.S. team for Hazeltine. Rickie Fowler had a one-shot lead going into the final round and had gone 55 straight holes without a bogey until the 11th hole, which cost him the lead. Needing a third-place finish to earn a spot on the team, Fowler missed a 4-foot par putt on the 15th and made double bogey on the 16th. He tied for seventh and wound up making the team as a captain’s pick.

NOTEWORTHY: Phil Mickelson had 72-hole scores of 280 and 278 in the U.S. Opens at Bethpage Black and both times was runner-up. He finished at 285 and 281 in the two PGA Tour events at Bethpage, never cracking the top 10.

QUOTEWORTHY: “Everyone’s been talking about the Ryder Cup. If you go and win, it takes care of everything else.” — Patrick Reed.