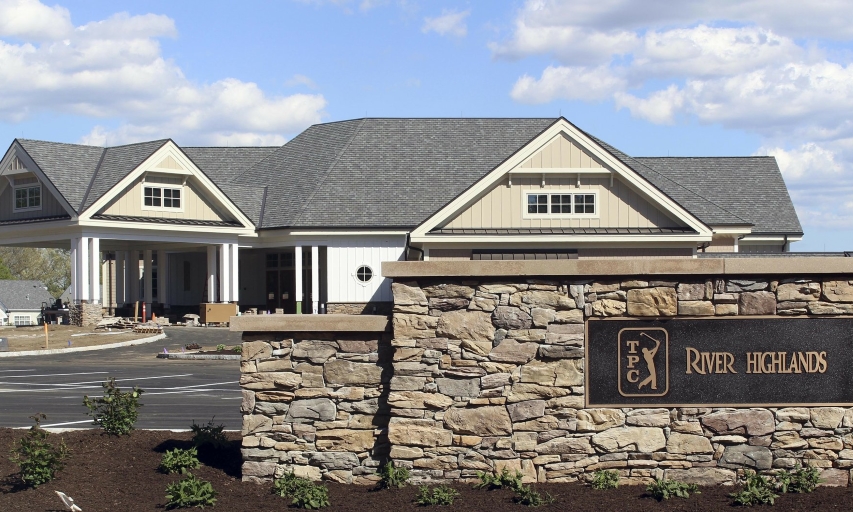 Construction of the 40,000-square-foot (3,716-square-meter) building began last July, a week after the 2018 Travelers Championship ended. Workers were busy with landscaping and other final touches during media day on Monday. The facility is expected to be finished when the pros arrive for next month’s annual tournament.

“It’s really the third leg of the stool,” said Andy Bessette, executive vice president and chief administrative officer of the Travelers, which took over as the tournament’s title sponsor in 2007. “Our goal, right from the beginning was to make this the best tournament on the Tour. We try to improve it in some way each year.”

The building is four times the size of the old clubhouse and includes larger locker rooms and lounges, multiple dining rooms, a 500-seat ballroom, two commercial-grade kitchens, administrative offices and a golf shop. Numerous interactive touch-screen video boards dot the walls, showing the history of the course and its champions.

The building was modeled after clubhouses at several other TPC courses, with modifications such as the use of Connecticut field stone to give it a New England look, said David Corrado, the general manager at TPC River Highlands.

The club is private and Corrado would not divulge the cost of the clubhouse, but did say no public funds were used to build it.

Corrado said the facility is expected to be a money maker for the club. He has already booked it for numerous weddings, charity and corporate events.

“This clubhouse is second to none,” he said. “It gives us the opportunity to take care of not only our members and the PGA players, but the surrounding community as well.”

Defending champion Bubba Watson, who has won the Travelers Championship three times, was the first player to get a look at the clubhouse, admiring the view Monday of the 18th hole from the deck off the player’s dining area.

This year’s tournament already has commitments from 15 of the world’s top 25 ranked golfers and Watson said recruiting others will be that much easier.

“This is just one more notch on Travelers belt,” he said. “They can market everything they’ve done over the last 10 or 12 years for this tournament. Believe me, guys notice.”