Defending PGA Champ Koepka Has Confidence of an Elite Player 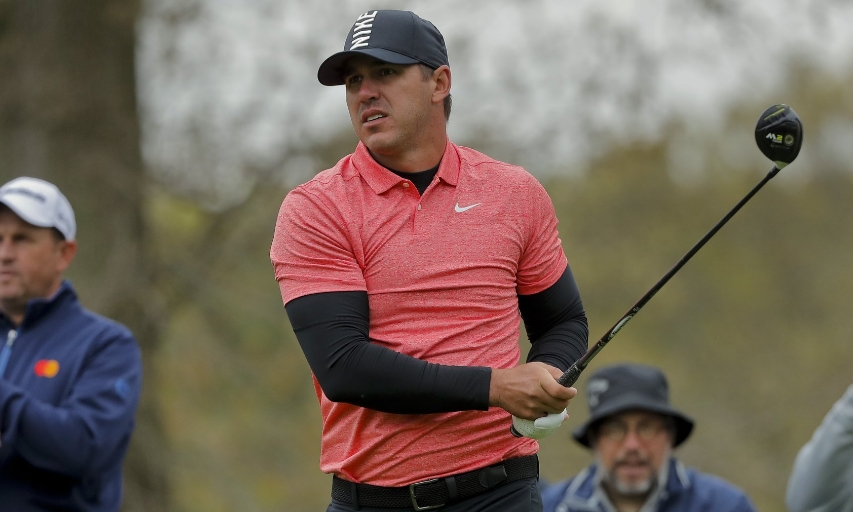 FARMINGDALE, New York — Tiger Woods spent a half-hour answering all sorts of questions at a packed news conference. As he walked out, so did more than half of the media members who gathered to hear his every word.

Brooks Koepka then immediately entered the room. Koepka is the titleholder of the PGA Championship and has won the last two U.S. Opens. To use a phrase familiar in these parts of Long Island, he is not exactly chopped liver.

That’s the way it goes for one of the favorites at long and, for now, very wet Bethpage Black.

Not that Koepka cares much about the attention, at least not until folks are cheering for the guy lifting the Wanamaker Trophy. Just the way they did last June about 60 miles east of Bethpage when he outlasted everyone at Shinnecock Hills for his second straight U.S. Open victory . He is trying to join Woods as the only back-to-back winners of the PGA Championship in stroke play; Woods did it twice.

“It’s always nice to defend, but being in New York, I’ve got good memories,” Koepka said. “It’s a fun place to play in front of the fans. They’re all energetic, and you come back and you’ve got good feelings this week and just kind of hopefully you ride that momentum.”

No one has more momentum in the big tournaments, not even Woods, who dramatically won his 15th major at Augusta National in April. Koepka was right there challenging Woods for the green jacket.

“I get Tiger was back, so it’s a little bit different,” Koepka said of where the focus went at the Masters — and always will go with Woods around. “You know, a lot of the attention was going to be there. But some of it was a little bit manufactured on myself. But I think you’ve got to find a chip or you’ve got to find something to motivate yourself and give you that extra little something going into a tournament or going into an event, whatever it might be, to really want to push you over that line.”

In fact, Koepka has said for a while that getting over that line in majors is easier than winning regular PGA Tour events, of which he has only two. His reasoning reveals a level of confidence that only the elite of their sport own.

“The easiest way I can break it down is there’s ... 156 in the field, so you figure at least 80 of them I’m just going to beat,” he explained. “From there, the other, you figure about half of them won’t play well, so you’re down to about maybe 35. And then from 35, some of them just, pressure is going to get to them. It only leaves you with a few more, and you’ve just got to beat those guys.

“If you just hang around — I think one of the big things that I’ve learned over the last few years is you don’t need to win it, you don’t have to try to go win it. Just hang around. If you hang around, good things are going to happen.”

Good things such as contending at the Masters, where a tee shot into the water at the iconic 12th hole when the wind changed might have kept him from beating Woods. And at the British Open, where he already has two top-10 finishes.

At 29, Koepka envisions winning both of those at some point in his itinerant career that began on the European Challenge Tour. And plenty more majors.

“Yeah, I mean, I’ve got a number. I don’t see why you can’t get to double digits,” Koepka said. “I think you keep doing what you’re supposed to do, you play good, you peak at the right times.

“Like I said, I think sometimes the majors are the easiest ones to win. Half the people shoot themselves out of it, and mentally I know I can beat most of them, and then from there it’s those guys left. Who’s going to play good and who can win? I don’t see any reason it can’t get to double digits.”

To get to four major trophies on his resume, Brooks will need to contend with the reinvigorated Woods, and with British Open champion Francesco Molinari, who was in control at Augusta National until a back-nine collapse. They will be paired together for the first two rounds.

Woods likes the idea of that pairing; who wouldn’t want to be in a group of the most recent major winners?

“As far as this week, this week is going to be a lot of fun with the crowds, the excitement that we’ve had here the last, what, three events that we’ve played here,” Woods said, referring to two U.S. Opens — he won it in 2002 — and a Barclays. “The pairing that I’m involved in, it’s going to be just a boatload of fun for all of us.”