Johnson the Best Player with Only 1 Major 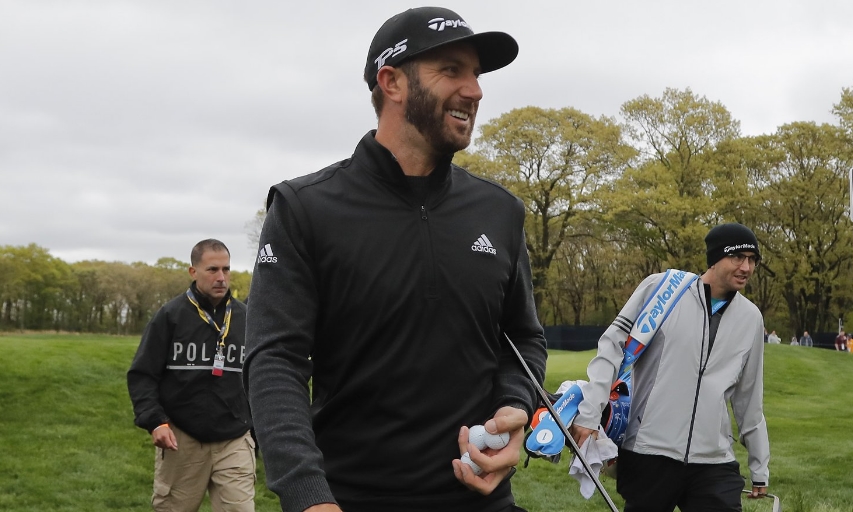 FARMINGDALE, New York — Dustin Johnson was on the wrong side of history at the last PGA Championship.

It wasn’t because Brooks Koepka, his best friend in golf, walked away from Bellerive with the Wanamaker Trophy for his third major championship. By finishing 10 shots behind, Johnson set a most obscure record by going eight consecutive majors at No. 1 in the world without winning any of them.

And the beat goes on.

He is back to No. 1 for the May version of the PGA Championship, still among the favorites at Bethpage Black because it’s a big golf course and he has big talent. He was a runner-up at the Masters and already has two victories this year.

The No. 1 ranking means little more than pride.

Having only one major in 39 tries? That’s a little more irritating.

“Disappointed I wouldn’t go with,” Johnson said, perhaps realizing that 21 victories worldwide would not suggest his career has been a bust. “But a little frustrated sometimes just because I’ve had quite a few chances.”

Some of those chances are as memorable as the one major he won.

There was the three-shot lead at Pebble Beach that was gone after two holes in the 2010 U.S. Open on his way to an 82. He missed out on a playoff in the PGA Championship later that year at Whistling Straits when he set his club on loose sand without realizing it was a bunker. The 12-foot eagle putt he needed to win the 2015 U.S. Open at Chambers Bay turned into a three-putt par and a silver medal.

Last year at Shinnecock Hills in the U.S. Open, he went from a four-shot lead to a four-way tie going into the last round, and then Koepka simply outplayed him.

His only major was at Oakmont, famous for Johnson having to play the final seven holes without knowing the score because of a rules dispute. He won that 2016 U.S. Open with such a steady hand that it looked for sure more majors would follow.

While it’s still early — Johnson is only 34 — he is eager to add to the total.

Never mind the decades-old label of best to have never won a major. Now it’s the best to have only one major.

Since the world ranking began in 1986, Johnson is among 12 players who were among the top 10 in the world when they won their first major and haven’t won another. The list starts with Ian Woosnam and Fred Couples in the early 1990s. It includes David Duval and Davis Love III.

The more current group features Johnson, Justin Rose, Adam Scott and Jason Day, all of whom have reached No. 1 in the world.

“It’s hard to win majors,” Johnson said. “If it was easy, a lot of guys would have a lot more than they do. But it’s just tough. They’re always on tough golf courses, and you’ve got to put four good rounds together. A lot of times that’s hard to do on really tough courses.”

It seems ludicrous now because Tiger Woods is sitting on 15 majors, but getting that second one was important. Woods had won the 1997 Masters by 12 shots and then went 10 majors without. He changed his swing, his agent, his caddie. And then he held on for a one-shot victory at Medinah in the 1999 PGA Championship.

“It was a big deal to get a second major championship and get the numbers to start to accrue,” Woods said Tuesday. “It just started the momentum, and you can see what happened in 2000, 2001 and 2002. But I think ’99 was a big moment to kick-start all that transpired.”

Rory McIlroy didn’t have to wait that long. One year and two months after his record-setting U.S. Open victory at Congressional, he won by eight shots at Kiawah Island in the PGA Championship. He recalls coming up the 18th fairway with a lead big enough to allow him to realize, “I’m about to become a multiple major champion.”

“There’s a lot of one-time major winners,” McIlroy said. “But then when you can call yourself a multiple major champion, that’s pretty cool. You join another list, and then you sort of try to keep going.”

He is now at four majors, one green jacket shy of the career Grand Slam. Jordan Spieth won his first major at the 2015 Masters, and the next one two months later (at Johnson’s expense) at Chambers Bay. He, too, is one major short — the PGA Championship — of a career slam.

Koepka last year became the first player to win back-to-back in the U.S. Open in 29 years. Equally important was having two majors, even if he kept the same trophy.

“You get the first one and it’s, ‘Oh, this is awesome.’ And then reality sets in,” Koepka said. “It’s not, ‘Was it a fluke?’ But there’s been a lot of guys who only won one. Can you turn that one in two? And from two, boom. Keep this rolling.”

Johnson stands out among his current group of one-time major champions because he is a prolific winner. When he won by five shots in Mexico City, he became the youngest player since Woods to reach 20 PGA Tour victories.

He hopes the next one is a major, the sooner the better.