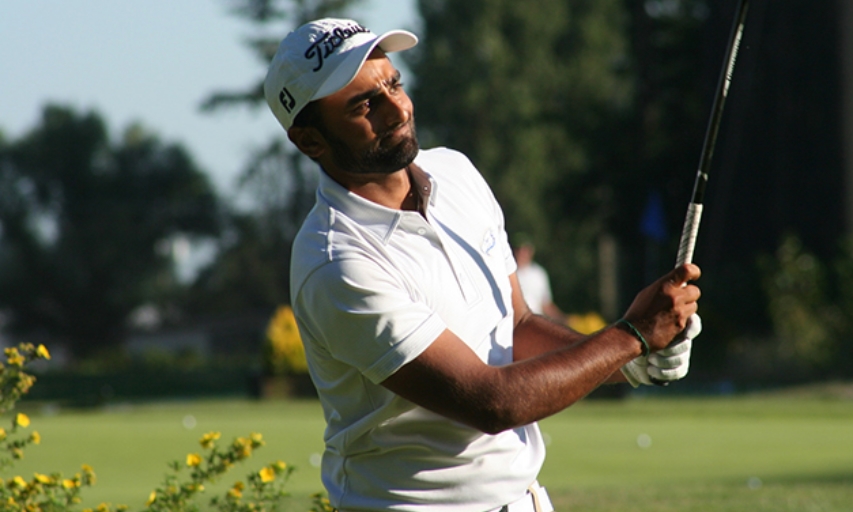 Nathu eagled the first playoff hole to beat Logan Bryant of Florida A&M. Both players had finished the 54-hole event at even-par after each shot one-under 71s in Sunday’s final round at the PGA Golf Club in Port St. Lucie, Fla.
Nathu’s eagle came after he had blown a two-shot lead on the 18th green, where he three-putted for bogey from 18 feet while Bryant made birdie.

He sunk a 40-foot putt for eagle on the first playoff hole. “I was shocked and frustrated about it,” Nathu said. “I just had to forget about it. I hit one of the greatest three-woods from 270 (yards) to the fringe. I kind of felt like I would make the putt. It was a load off my shoulders.”

While many of the participating teams represent historically black colleges and universities, the individual competition is open to all minority men and women student-athletes playing collegiate golf at the Division I, Division II or NAIA levels. Nathu, a Richmond resident, and fellow Thunderbird Andy Kim, a freshman from Langley, both competed in the individual men’s competition. Kim finished in 20th place.

Nathu and Kim will be heading to Arizona for the NAIA men’s national championship, which goes May 21-24 at Las Sendas Golf Club in Mesa.

OKLAHOMA CALLING: The UBC women are seeded fifth heading into this week’s NAIA Championship tourney at Lincoln Park Golf Course in Oklahoma City. Avril Li of Port Moody, Esther Lee of Maple Ridge, Kate Johnston of Ayr, Ont., Shania Remandaban of Coquitlam and Cecile Kwon of Maple Ridge will represent UBC at nationals as the Thunderbirds try to end what has been a very good year in style. UBC won a school record eight tournaments this season.

Lee, a freshman, has been particularly impressive for UBC. She won four individual titles this year. “As a coaching staff I don’t think you could have had a better freshman,” UBC coach Chris Macdonald said of Lee. “She is everything you could ask for. She works hard in the classroom and she is just a great player. She is just a fearsome competitor. It is just her consistency that is so impressive.

“She is a special player. She hits it far enough to be competitive. Her ball flight is very consistent and she is a great putter, but I think the thing that is really unique to Esther is just her competitiveness. She really wants to win and she wants to win for her team and it is a lot of fun to have her around.”

The NAIA nationals begin Tuesday and continue through Friday. “I feel like we have a team that if we play to our capability we could finish in the top three,” Macdonald said. “And if we get a bit of luck we could be right there on the last day.” The top four teams advanced to nationals, but Jack and Rampuri earned individual berths with strong performances at regionals. Jack tied for eighth, while Rampuri tied for 11th. They will be the first SFU women to play at the nationals. “I am very proud of the effort the team put together throughout the West Regional,” said SFU coach Matthew Steinbach. “Although we came up just short of qualifying for nationals as a team, I’m thrilled that Kylie and Jaya will get an opportunity to compete as individuals against the best golfers in DII.”

MISSING THE CUT: It wasn’t a great week for Canadians at the AT&T Byron Nelson tourney in Dallas. Merritt’s Roger Sloan was the only one of six Canadians entered to survive the 36-hole cut. Sloan did not survive a second cut that was made after the weather-delayed third round was completed Sunday morning.  Abbotsford’s Nick Taylor and Surrey’s Adam Svensson were among the Canadian cut casualties. Only two Canadians -- Adam Hadwin of Abbotsford and Corey Conners of Listowel, Ont. -- are eligible for this week’s PGA Championship at Bethpage Black on New York State’s Long Island.

ON A MISSION: Langley’s James Allenby had an impressive week. After shooting a seven-under 65 to win a RBC Canadian Open regional qualifier at Kings Links in Delta, Allenby fired a 10-under 61 to win the Vancouver Golf Tour’s Mission Classic at Mission Golf Club. Allenby, who earned $850 for the win, will tee it up later this month at the PGA Tour Canada-Mackenzie Tour season-opening Canada Life Open at Point Grey Golf & Country Club in Vancouver.