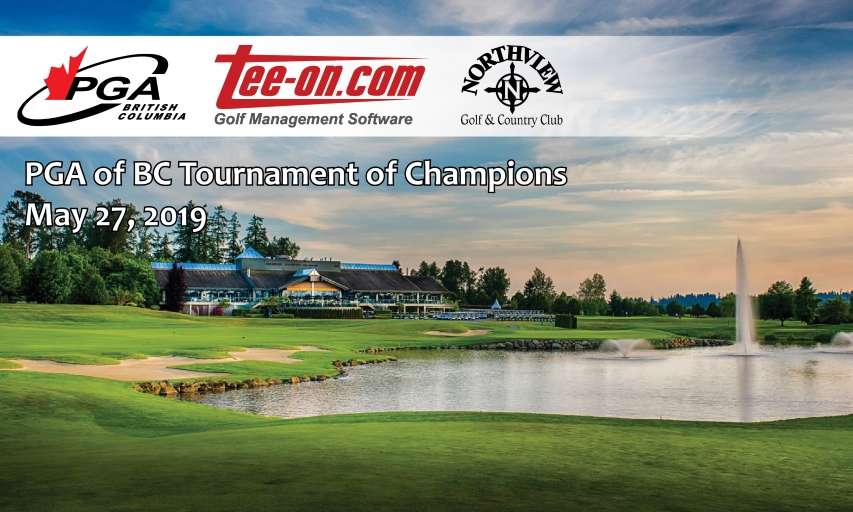 RICHMOND, British Columbia — Forty elite amateurs from across British Columbia will have the unique opportunity to team up with their local Club Professional on a tour-calibre course next week when the PGA of BC Tournament of Champions presented by Tee-On Golf Systems Inc. takes place Monday at Northview Golf & Country Club.

The Tournament of Champions -– which features PGA of BC Head, Executive and Head Teaching Professionals joining forces with a club champion or designated amateur from their facility –- is an 18-hole best-ball competition with more than $15,000 up for grabs between amateur prizing and the Professional purse.

This year’s event will be held on Northview’s Ridge Course, which is not only recognized as one of the province’s premier tracks, but also well known as a PGA Tour venue for a seven-year stint shortly after its grand opening in 1994. The Greater Vancouver Open debuted on the Arnold Palmer-designed layout in 1996 and remained there through 2002, rebranding as the Air Canada Championship along the way.

“As a proven championship golf course, with the history that we’ve had with the PGA Tour, I think any event that comes in gains a little bit of stature through that connection of playing a true PGA Tour course,” said Northview Head Professional Chris Hoy. “We’re proud to be the hosts.”

Northview’s Ridge Course claims a key piece of Canadian golf history, having been the site of Mike Weir’s maiden PGA Tour triumph at the 1999 Air Canada Championship, making him the first Canadian to win on home soil on the top circuit in 45 years. Monday’s tournament will allow competitors to relive some of that history by utilizing the same pin positions from the Sunday of Weir’s win 20 years ago.

You don’t have to venture off the property at Northview to find the Professional who made up one half of last year’s winning team. Matthew Palsenbarg, Head Teaching Professional at The Tour LAB @ Northview, will be back in the field to defend the title for his academy on Monday.

Palsenbarg and 2018 amateur partner Jake Scarrow lapped the field at Tobiano Golf Course with a 10-under-par 62 that gave them a six-stroke triumph, setting new tournament records for score relative to par and in margin of victory.

“Last year, we dropped a lot of long putts, which kind of made it easy,” Palsenbarg recalled of last year’s win. “Once we had the momentum, they just kept going in.”

This year, Jackson Jacob will be stepping in as The Tour LAB’s amateur, and the junior-aged competitor appears to be a solid partner for Palsenbarg. The Langley native, who will join the University of Idaho Vandals men’s team as a freshman later this year, earned a top-30 finish in last year’s BC Amateur Championship and a top-10 result in the 2018 BC Junior Boys’ Championship. He also captured the Zone 3 junior championship title last year, and has two first-place finishes in Zone 3 Spring Tour play already in 2019.

There are plenty more past winners beyond Palsenbarg – both Professional and amateur – in the field Monday that could be a factor in this year’s Tournament of Champions. That includes the 2017-winning duo of Victoria Golf Club Head Professional Lindsay Bernakevitch and two-time BC Men’s Mid-Amateur Champion Craig Doell, both of whom had previously won the event with different partners.

With so much talent on the tee sheet for this year’s tournament, it wouldn’t be at all a surprise to see the winning team post a score in the low 60s.

“I believe there are birdies out there all the time,” said Hoy.

Palsenbarg agreed that the Ridge Course will provide ample opportunities for teams to play aggressively on Monday.

“It’s not a great course to show up and be super patient on,” said Palsenbarg. “It’s a course you play to attack, and if you’re playing well, it definitely rewards good play.”

The shotgun start will begin at 8 a.m. Visit our tournament page for full event details and a complete list of teams entered, or click here to view Monday's hole assignments.

About Tee-On Golf Systems, Inc.
London, Ontario-based Tee-On Golf Systems Inc. provides a complete suite of premier golf-management software that allows facility operators to take greater control over their business, significantly increase their club’s efficiency and dramatically improve customer service. When you choose Tee-On as your golf technology partner, you're choosing to partner with a leader in the industry who understands that you want complete control over your business. Learn more by visiting www.tee-on.com.