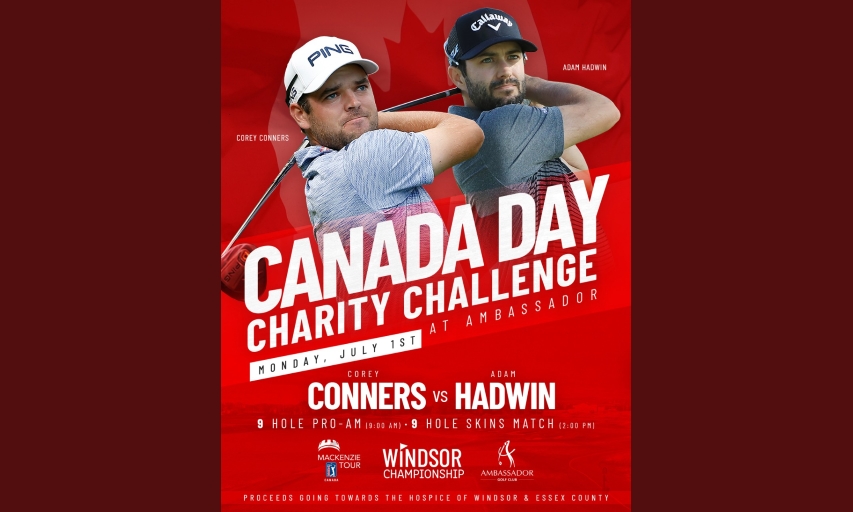 By THE MACKENZIE TOUR

WINDSOR, Ontario — The Windsor Championship announced that the 2019 tournament week will kick off with PGA TOUR winners Adam Hadwin and Corey Conners, the top-ranked men’s Canadian golfers in the world, playing a pro-am and charity skins game on Canada Day at Ambassador Golf Club.

Fans will have the opportunity to watch the PGA TOUR pros on July 1, with tickets for the event going on sale online and at Ambassador Golf Club on May 24 at a cost of $20, with entrance free for kids 18-years old and younger.

Three-player teams are available to play in the morning pro-am, which will also feature prominent Mackenzie Tour players, beginning at 9 a.m. EDT. After the morning pro-am, there will be lunch and refreshments available for purchase, as well as entertainment, which will be followed by a $10,000 skins game between Hadwin and Conners at 2:00 p.m. with proceeds from the event benefiting the Hospice of Windsor-Essex County.

Both Hadwin and Conners began their professional careers on the Mackenzie Tour and have gone on to win on the PGA TOUR, with Hadwin winning the 2017 Valspar Championship and Conners recently taking the 2019 Valero Texas Open title.

“We are thrilled at the opportunity to welcome the two top male Canadian golfers in the world to Windsor to play in front of our city’s fans,” said Windsor Championship Tournament Director Adam Wagner. “It was so great to see the city rally behind the tournament last year, and we think having Adam and Corey’s presence in Windsor will be the perfect way to once again get fans excited for the tournament while supporting a great cause.”

The Windsor Championship excelled in its inaugural event in 2018, with nearly 6,000 fans lining the fairways during the week, helping to raise $110,550 for The Hospice of Windsor-Essex County.

“It was incredible to see the success of the Windsor Championship last season,” said Mackenzie Tour – PGA TOUR Canada Vice President Scott Pritchard. “The community support was incredible, and coming of the heels of the successful launch of the tournament, the committee in Windsor wanted to make the event even bigger and better, and we can’t thank Adam and Corey enough for taking time away from their busy PGA TOUR schedules to play on Canada Day.”

The opportunity to host the Listowel, Ontario, native Conners and Abbotsford, British Columbia’s Hadwin presented itself after it was announced that the PGA TOUR’s inaugural Rocket Mortgage Classic will be played the weekend prior to Canada Day in Detroit, Michigan.

“I’m very excited about the opportunity to celebrate Canada Day on Canadian soil,” said Hadwin. “I know that there are plenty of golf fans in Windsor, and it will be a lot of fun to see a lot of red and white walking alongside Corey and me.”

“Growing up in Ontario, it’s great that we have the chance to play in front of Canadian fans and support a great cause at the same time,” said Conners. “Playing on the Mackenzie Tour for a few years, it’s great to see how much the Tour has grown, and it’s great to see communities like Windsor supporting the events.